Trump bets on COVID-19 vaccine for political shot in arm 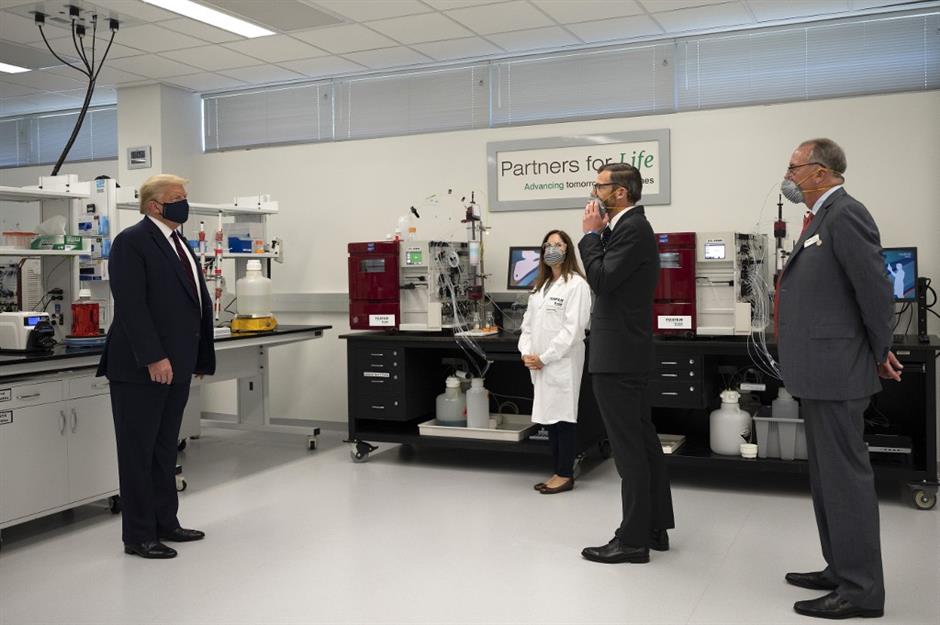 US President Donald Trump vowed to defeat the coronavirus by "unleashing American scientific genius" as he toured a COVID-19 vaccine facility in the swing state of North Carolina on Monday.

Trump appears to have pinned his hopes on the swift emergence of a successful vaccine to both contain the country's still raging epidemic and revive his faltering reelection hopes.

"We will achieve a victory over the virus by unleashing American scientific genius," he told reporters at Fujifilm Diosynth Biotechnologies in Morrisville, hours after it was revealed national security adviser Robert O'Brien had tested positive.

The facility has been awarded a contract to mass produce an experimental vaccine developed by Novavax, as part of a multi-billion-dollar government initiative dubbed Operation Warp Speed.

The plan involves investing heavily in leading pharmaceuticals to aid their development and manufacturing efforts, with the goal of delivering 300 million doses of vaccine by January 2021.

It's "never been done before, but we suspect it's going to work, and work very well," added Trump, who later donned a black mask and toured the lab.

The United States is by far the worst-hit country in the world, with more than 4.2 million confirmed COVID-19 cases and nearly 150,000 deaths.

Though the number of new cases has leveled off over the past few days, the US has failed to push its curve down as other nations have done through lockdowns and physical distancing.

Trump's latest comments confirmed that the administration believes that, in America's case, only a vaccine can help.

"It's not masks. It's not shutting down the economy. Hopefully, it is American ingenuity that will allow for therapies and vaccines to ultimately conquer this," White House chief of staff Mark Meadows told ABC News on Sunday.

The virus has also repeatedly penetrated Trump's inner circle, with O'Brien the latest and most senior White House aide to test positive.

He "has been self-isolating and working from a secure location off site," the White House said in a statement on Monday, adding that there was "no risk of exposure to the president or the vice president."

Others who have been previously infected include Vice President Mike Pence's spokeswoman Katie Miller, and Kimberly Guilfoyle, a top fundraiser for the Trump campaign and his elder son's girlfriend.

The US has spent more than US$6.3 billion since March to fund vaccine development efforts under Operation Warp Speed.

The program is unabashed in its aims to procure vaccines for the American people first — unlike European leaders who have called for COVID-19 drugs to be a "global public good."

Pharmaceutical newcomer Moderna, which, alongside AstraZeneca and two Chinese firms, is among those furthest in its development timeline, began the final stage of its clinical trial on Monday.

The trial is being co-conducted by the National Institutes for Health across the United States and is expected to enroll approximately 30,000 adult volunteers.

Participants will get two doses of the vaccine given 28 days apart.

The first volunteer, a black woman identified as Robyn, participated in a video chat hosted by the NIH on Monday, telling viewers her friends and relatives had initially told her "it was a bad idea."

"And the reason for that was because in the African-American community, we are all familiar with the Tuskegee experiments," she added, referring to a 40-year study the US conducted on black men to see the effects of untreated syphilis.

The men involved were kept in the dark about cures on purpose.

But, added Robyn, she was encouraged by laws that are now in place to prevent a repetition, and motivated by the desire to help others against a disease that disproportionately impacts communities of color.

An irony of the process is that, given the rampant nature of the US epidemic, results could come far sooner than the two years the trial is set to run.

Daily new cases have plateaued around the 66,000 mark for the past few days, making it more likely that trial participants will be exposed to the virus sooner rather than later.

"It's a really optimistic scenario. It could be November," Moderna CEO Stephane Bancel told CNBC on Monday.