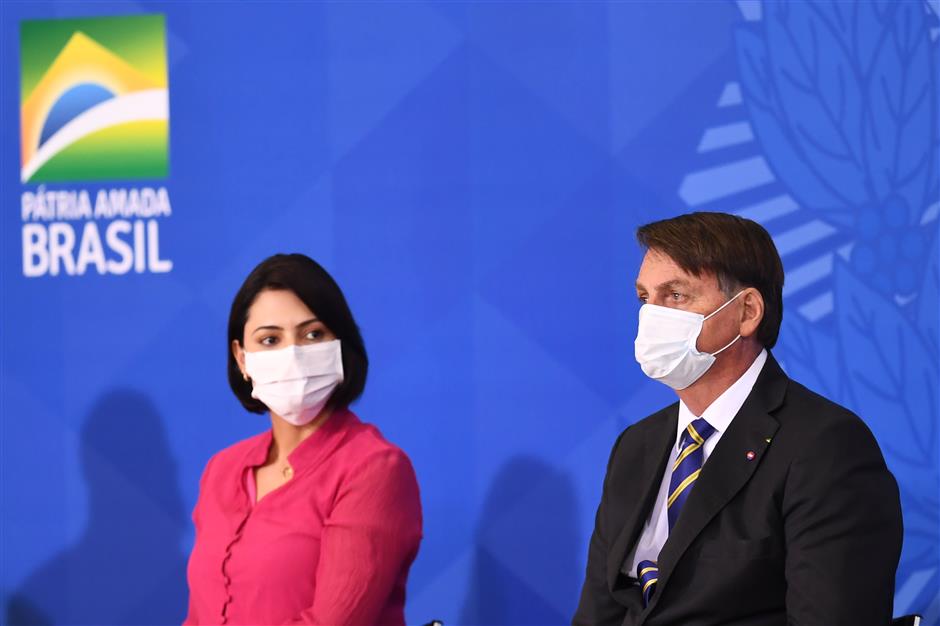 Brazilian President Jair Bolsonaro and the first lady Michelle Bolsonaro attend the launch of the Rural Women's Rights program at Planalto Palace in Brasilia on July 29, 2020.

Michelle Bolsonaro, wife of Brazil's President Jair Bolsonaro, and Science, Technology and Innovation Minister Marcos Pontes are the latest high-profile Brazilians to have tested positive for the novel coronavirus (COVID-19), it was announced on Thursday.

The first lady, 38, "is in good health and will follow all of the established protocols," the president's office said.

President Bolsonaro tested positive earlier, as did some members of his cabinet.

Pontes said via Twitter he had several symptoms of the disease and begun treatment, and would work remotely from his home.

"I am fine, just a few symptoms of a cold and headache. Now in isolation. Everything is going to be fine," wrote Pontes, adding he would participate in trials of the antiparasitic, anti-viral drug nitazoxanide, which has been approved in Brazil for treating mild cases of COVID-19.

Clinical trials of the drug are being spearheaded by his ministry, which coordinates the work of laboratories and specialists on the novel coronavirus.

On Saturday, President Bolsonaro said a new test showed he no longer had the virus after initially testing positive on July 7.

Two other ministers, Bento Albuquerque, who is in charge of mines and energy, and Augusto Heleno, who heads the institutional security cabinet, tested positive in March, but quickly recovered.

Brazil has the world's second-largest outbreak, after the United States, with more than 2.5 million cases of infection and over 90,000 dead from the disease.