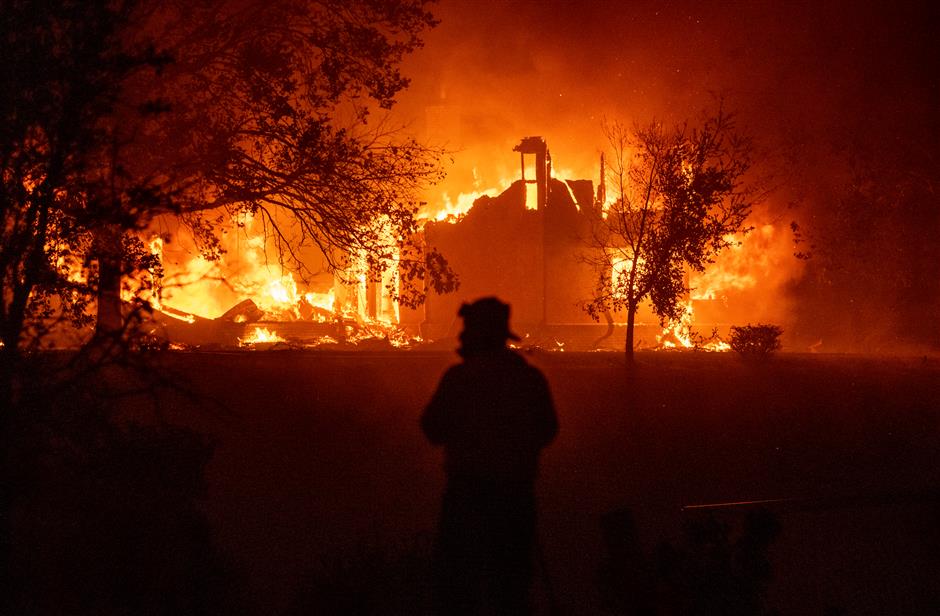 A home burns in Vacaville, California, during the LNU Lightning Complex fire on Wednesday. Dozens of fires are burning out of control throughout Northern California as firefighting resources are spread thin. Thousands of people have fled their homes.

Crews worked in blistering heat on Wednesday to beat back wildfires that ignited across Northern California, sending thousands of people from their homes into smoky air, briefly halting traffic on an interstate and killing a pilot on a firefighting mission.

Hundreds of fires were burning across California, including 23 major fires or groups of fires that Governor Gavin Newsom blamed on “extraordinary weather” and “all of these lightning strikes.” He said the state has recorded nearly 11,000 lightning strikes in 72 hours and knows of 367 fires.

Five to seven people were injured in a fire in Stanislaus County, southeast of San Francisco, Sheriff Jeff Dirkse told the Sacramento Bee.

One had major burn injuries and all were taken by ambulance for treatment, he said.

Someone evacuating on Monday had reported that workers at an illegal marijuana farm were still at the ranch but he couldn’t confirm if any were among the patients.

Two fires in Solano County prompted evacuation orders for 8,000 residents near the Russian River. In Healdsburg, with a population of about 12,000, people were warned late Wednesday to be ready to flee.

Ash and smoke filled the air in San Francisco, which is surrounded by wildfires to the north, east and south. The LNU Lightning Complex is made up of several fires in five counties north of San Francisco, including in Vacaville, a city of about 100,000 people between San Francisco and Sacramento.

Nearby Travis Air Force Base ordered non-essential personnel to evacuate.

Several thousand people in the small communities of Angwin and Deer Park were ordered evacuated.

Police and firefighters warned residents before dawn to evacuate as flames encroached on Vacaville. At least 50 structures were destroyed, including some homes, and 50 were damaged.

“The whole sky was red orange and it was coming over the hill there and it was massive. I’ve never seen anything like it and it only took a few minutes to get here,” said Karen Hansen.

She evacuated her Vacaville home late Tuesday as flames rushed toward their small farm, packing up her smaller animals but unable to bring along two beloved horses. They returned on Wednesday to find the house and barn destroyed, but Hansen was thrilled to see that her horses survived.

“I’m not upset about the house. I’m just happy that my horses and animals are alive and my daughter,” she said. In eastern San Francisco Bay, a cluster of 20 separate lightning-sparked fires called the SCU Lightning Complex was threatening about 1,400 structures in rugged terrain with dense brush. The fires have torched 344 square kilometers.

To the south of San Francisco in San Mateo and Santa Cruz counties, about 22,000 people were ordered to evacuate because of a fire in dense wooded parkland.