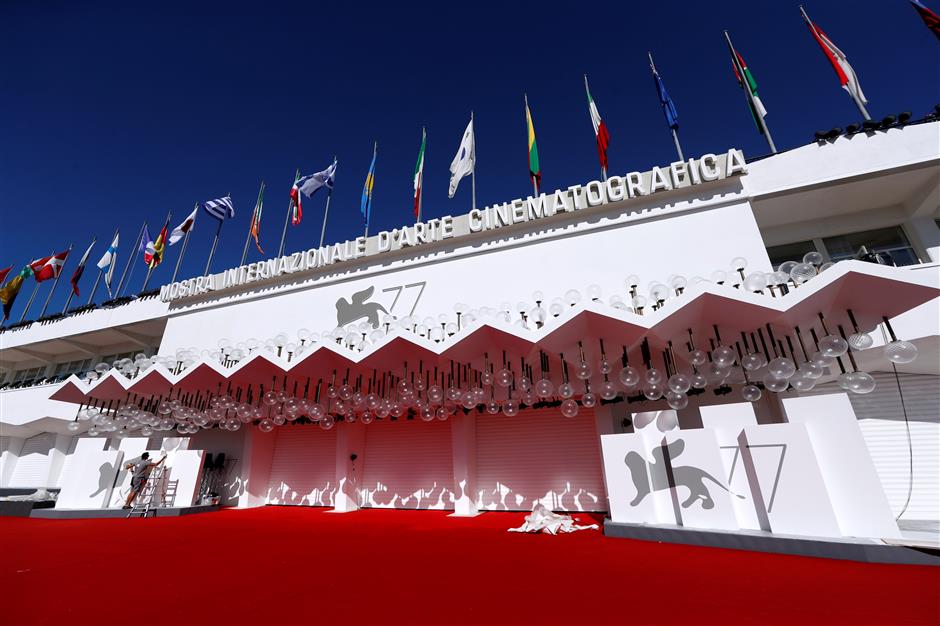 The Palazzo del Casino is pictured the day before the start of the 77th Venice International Film Festival on Wednesday, the first major international film festival held since the coronavirus outbreak, in Venice, Italy.

Venice is reclaiming its place as a top cultural destination with the opening of the Venice Film Festival — the first major in-person cinema showcase of the coronavirus era after Cannes canceled and other international festivals opted to go mostly online this year. But don’t be fooled. The 77th edition of the world’s oldest film festival will look nothing like its predecessors.

The public will be barred from the red carpet, Hollywood stars and films will be largely absent and face masks will be required indoors and out as the festival opens on Wednesday.

Those strict measures are evidence of the hard line Venice and the surrounding Veneto region took to contain the virus when it first emerged in the lagoon city in late February. Unlike neighboring Lombardy, which became the epicenter of the COVID-19 outbreak in Europe, Veneto largely kept the virus under control with early local lockdowns and broad testing once the virus was widespread.

The Venice Biennial chief Robert Cicutto said the decision to hold the festival at all was an important sign of rebirth for Venice and the film industry, and said the experience on the barrier island of Lido will serve as a “laboratory” for future cultural gatherings.

“It will be an experiment on the ground of how to confront an important event in the COVID era,” he said in presenting this year’s Venice lineup. 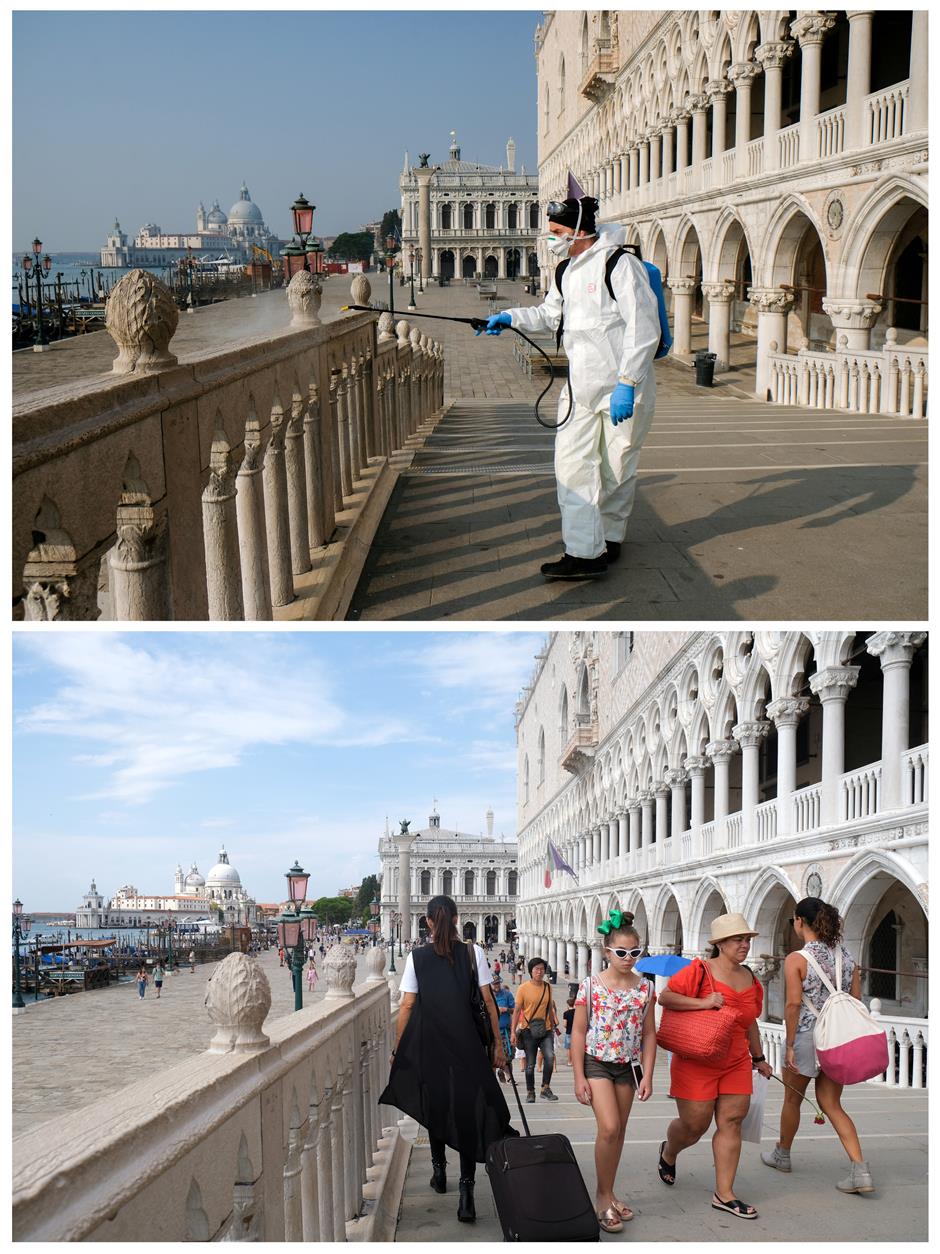 Top: A worker sanitizes the Ponte della Paglia bridge on St Mark’s square in Venice amid the coronavirus outbreak in March. Above: Tourists walk on the same bridge as the city ready to host the world’s first in-person film fest since COVID-19 era.

The September 2-12 festival marks Italy’s return to the art world stage after it became the first country in the West to be slammed by COVID. Even Tom Cruise’s “Mission: Impossible 7” in Venice at the time for three weeks of filming, had to stop.

Italy’s strict 10-week lockdown largely tamed the virus, but infections are now rebounding after summer vacations. Health authorities are scrambling to test passengers at airports and seaports to try to identify imported cases before they can spread.

Guests to the glamorous film festival are not exempt. If they arrive from outside Europe’s open-border Schengen area, they will be tested upon arrival. Other measures to limit contagion include reserved seats, spaced apart, for all screenings and a requirement to wear face masks even during screenings and outdoors.

“Clearly we have to abide by anti-COVID measures,” said Paola Mar, Venice’s culture chief. “Each of us has a personal responsibility. And if all of us do our jobs, we can limit the harm.”

But she said the show must go on, given the importance of the film festival and the Biennial’s other longer-term cultural contributions to Venice’s economy, which depends almost entirely on tourism.

Restrictions on travel from the US to Europe have meant that Hollywood films, which often use Venice as a springboard for other festivals and ultimately the Oscars, are essentially no-shows this year.

That means no sighting of Venice regulars George Clooney and Brad Pitt arriving by water taxi, no red carpet photo ops with Lady Gaga, who premiered “A Star is Born” here, or Joaquin Phoenix, whose “Joker” won Venice’s top prize, the Golden Lion, last year before going on to Oscar glory. 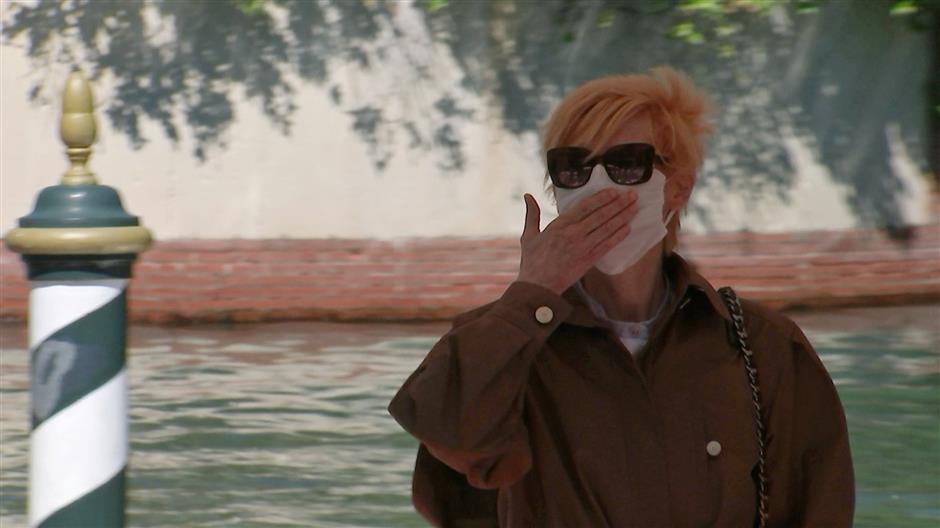 This year’s slightly reduced lineup still contains in-competition films from a variety of countries, but will be a mostly European affair.

Two Italian documentaries filmed during lockdown are making their debuts: Andrea Segre’s “Molecules,” a haunting study of an empty, ethereal Venice, premieres as the festival’s preopening film yesterday. And director Luca Guadagnino, whose documentary about Italian shoemaker Salvatore Ferragamo is an official out-of-competition film, offered up a last-minute short “Fiori, Fiori, Fiori!” about reconnecting with his childhood friends in Sicily during the lockdown.

Spanish director Pedro Almodovar is premiering his first-ever English-language film, “The Human Voice,” which he filmed and edited in the weeks after Spain’s lockdown ended.

The short film, an adaptation of the Jean Cocteau play of the same name, stars Tilda Swinton, who will be picking up a Golden Lion Lifetime Achievement award in Venice this year.

Cate Blanchett heads the main jury, which added Matt Dillon at the last minute after Romanian director Cristi Puiu pulled out. But other A-list celebrities are largely staying away.