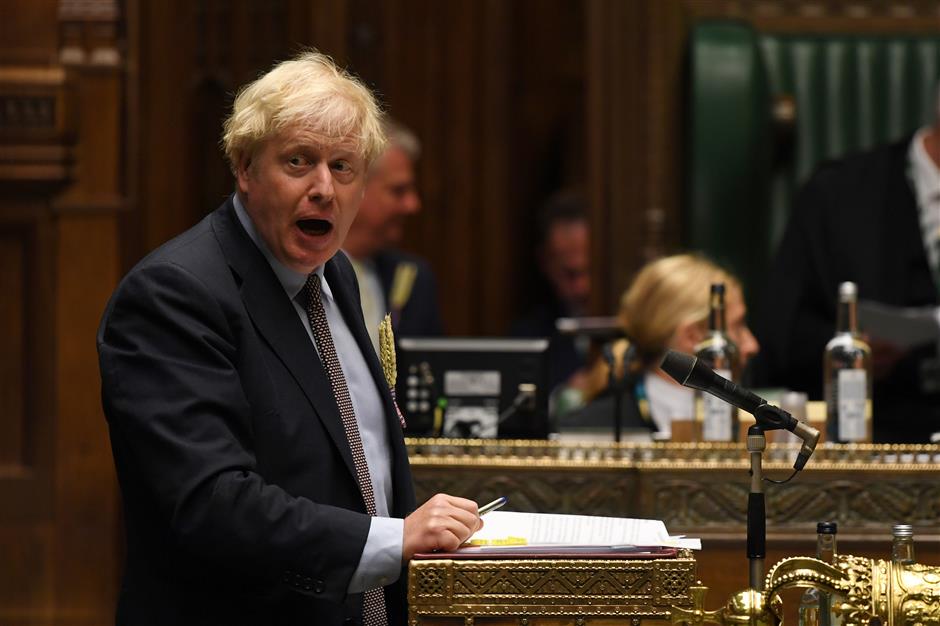 A handout photograph released by the UK Parliament shows Britain’s Prime Minister Boris Johnson during Prime Minister’s Questions in the House of Commons in London on Wednesday.

Prospects of a trade deal between Britain and the European Union appeared to dim, as UK’s government on Wednesday unveiled a new bill which could break international law by ignoring some parts of the two sides’ divorce treaty signed in January.

By saying the Internal Market bill will “to have effect notwithstanding inconsistency or incompatibility with international or other domestic law,” Downing Street acknowledged the post-Brexit customs and trade rules in Northern Ireland could be changed.

It would give the UK government the right to unilaterally change some of the arrangements made for the UK’s only land border with the EU.

The bill was published the same day when EU’s chief negotiator arrived in London for the 8th round of trade talks.

The EU side immediately voiced concerns that the proposed legislation would breach the binding divorce treaty.

President of the European Commission Ursula von der Leyen tweeted that she was “very concerned about announcements from the British government on its intentions to breach the Withdrawal Agreement.”

“This would break international law and undermines trust. Pacta sunt servanda — the foundation of prosperous future relations,” she said. The Latin phrase, meaning “agreements must be kept,” is a basic principle of international law.

“He stressed to the PM that the UK government should re-engage with EU negotiators urgently.” a government spokesman said.

Ireland’s foreign minister called Britain’s move a “chaos,” but said he believed a new post-Brexit trade deal between Britain and the European Union still can be done.

What’s in the Internal Market bill

The UK legislation, if passed by Parliament, will remove the EU’s power to impose checks and tariffs in the event that there is no EU-UK agreement, giving that power instead to the British government.

The British government says trade barriers between Northern Ireland and the rest of the UK could undermine Northern Ireland’s place within the UK and destabilize the peace settlement that ended decades of violence.

Johnson told lawmakers on Wednesday that the legislation was needed to protect against “extreme or irrational interpretations of the (Irish) protocol that could lead to a border down the Irish Sea.”

An independent country after Brexit

Also on Wednesday, Britain sets out its broad policy objectives on subsidies for the first time, confirming it would follow WTO rules.

Business minister Alok Sharma made the announcement, saying “ ... The UK must have flexibility as an independent, sovereign nation to intervene to protect jobs and to support new and emerging industries.”

Britain quit the EU in January but has remained part of its single market, largely free of trade barriers, under a status-quo agreement that expires in December.

The extent to which Britain can use state money to support firms and industries after Brexit is at the heart of disagreements holding up a deal on future relations with the European Union.

The EU is worried that Britain could use subsidies to create a competitive advantage over its members, while Britain is adamant it will be an independent state and can choose its own path.

WTO rules apply to goods only, and ban subsidies that are dependent on either how much a company exports, or the use of domestic goods in preference to imports. The WTO also provides a mechanism to resolve disputes between countries.