Highest of stakes: Pence and Harris square off in VP debate 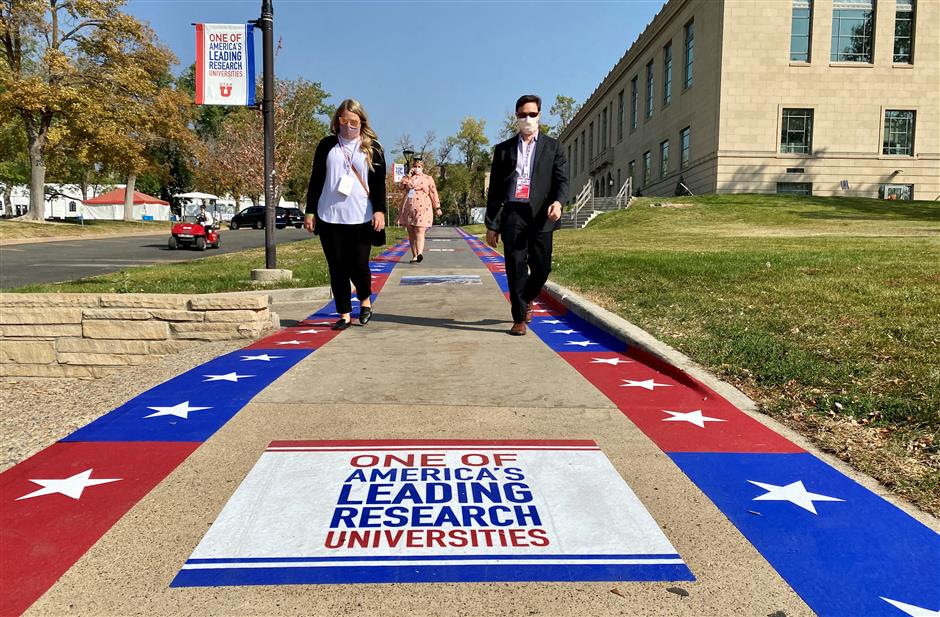 People walk on the campus of the University of Utah ahead of the vice presidential debate on October 6, 2020, in Salt Lake City, Utah.

US Vice President Mike Pence and Kamala Harris, the Democrat seeking his job, face off on Wednesday in their high-stakes debate, with COVID-19 and an infected Donald Trump's widely denounced response to the pandemic as the backdrop.

With Pence first in line for the presidency should Trump be unable to perform his duties, and Harris essentially auditioning to be the Democrat Party's future leader, their pandemic showdown has taken on fresh urgency 27 days before the election.

Two more presidential debates are scheduled, but they are now up in the air with Trump's diagnosis, meaning the debate between running mates — who will be separated on stage by a plexiglass barrier — could potentially become the final candidate clash before November 3.

Democrat Joe Biden, 77, has said he would not want to debate if the 74-year-old Trump — confined to the White House after a three-night hospitalization — is still sick with the virus.

But Trump, ever the hyperbolic showman, said in a Wednesday video that he felt "perfect."

"I think this was a blessing from God that I caught it," he said, explaining that his diagnosis provided opportunities to highlight therapies that he was administered and would like more Americans to receive.

With the election a referendum on Trump and his stormy presidency, Pence will need to present calm and reassurance to Americans rattled by the pandemic and lacking confidence in the administration's ability to keep them safe.

The 90-minute affair at the University of Utah begins at 9pm eastern (1am GMT on Thursday), with the candidates seated 12 feet (3.6 meters) apart in another nod to medical guidelines.

Asked by reporters on Wednesday if he had advice for his running mate on one of the biggest political stages of her career, Biden said "I think she'll do well."

The debate occurs at a time when more than 210,00 Americans have died from the coronavirus and the nation lurches from one crisis to another.

Not only has Trump tested positive; coronavirus has spread through his inner circle, infecting dozens of top advisers, administration staff, senior military officials and Republican lawmakers.

Racial and political tensions are simmering, prompting Biden to issue a clarion call for national unity and warn that "the forces of darkness" and division are "pulling us apart."

Trump continued his all-out verbal offensive, branding Biden "a wacko" in a stream of angry tweets on Wednesday.

The president is confronted by dire polling numbers and an economy staggering from COVID shutdowns that have left countless families and businesses struggling.

Trump also keeps warning that he may not accept the election result, arguing that mail-in ballots lead to fraud, while Senate Republicans are rushing to confirm his Supreme Court nominee even as some in their caucus are in quarantine.

The unique political storm led Republican Senator John Barrasso to describe the Pence-Harris showdown as "the most consequential vice-presidential debate since they started doing this," in 1976.

"People watching both of these candidates will be watching to see who is ready to be commander-in-chief," Barrasso told CNN.

As the president rages, ultra-loyalist Pence is under pressure to signal some stability, but he will also be closely watched for how he mounts a defense of the administration's response to the pandemic.

He will likely "prosecute the case against the California radical extremist of Kamala Harris," Trump campaign adviser Mercedes Schlapp told Fox News, setting the tone for the debate.

Harris, a US senator and former prosecutor from California, will no doubt attack Pence for his performance as leader of the White House coronavirus task force, which Democrats have accused of badly bungling the pandemic response.

There may be little appetite, though, for a repeat of the disastrous opening Trump-Biden debate, which was marred by their constant interruptions and personal insults.

Both participants have tested negative for coronavirus, and Pence reportedly opposed the use of a barrier.

"If the Trump administration's war on masks has now become a war on safety shields, that tells you everything you need to know about why their COVID-19 response is a failure," Harris press secretary Sabrina Singh said.