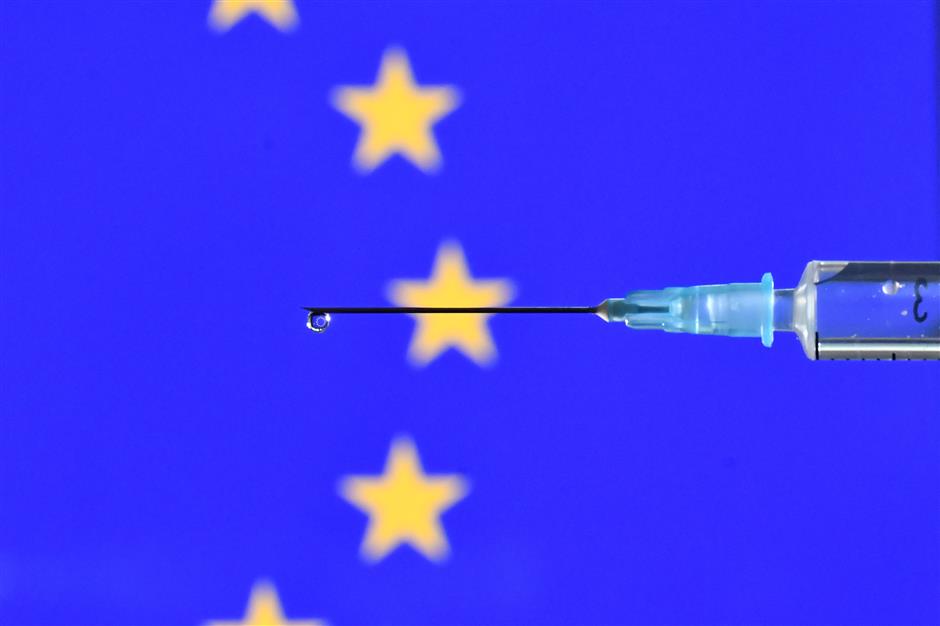 An illustration picture shows a drop from a syringe with a flag of the European Union reflected in it on Tuesday.

Hungary and Poland on Monday blocked the adoption of the 2021-2027 budget and recovery fund by European Union governments because the budget law included a clause which makes access to money conditional on respecting the rule of law.

The veto is likely to cause a delay in the launch of the 1.8 trillion euro (US$2.1 trillion) package that combines the EU’s long-term budget and the bloc’s economic recovery plan, but is unlikely to derail it altogether, a senior French official said.

“Hungary and Poland blocking the European budget doesn’t put into question our determination on the recovery and the rule of law,” French Europe Minister Clement Beaune said on Twitter. “A solution will be found in the coming weeks, France is fully involved to find one.”

Ambassadors of EU countries on Monday accepted a deal struck with the European parliament which establishes a clear link between EU money and the respect for the rule of law. They agreed because this vote required only a qualified majority and the opposition of Warsaw and Budapest could not stop it.

But when it came to voting on the 1.1 trillion euro budget itself and the 750 billion euro recovery package, which require unanimous support, “two EU member states expressed reservations,” the German presidency of the EU said.

The Polish and Hungarian veto would be discussed at a meeting of EU’s European affairs ministers yesterday and then at a video-conference of EU leaders tomorrow. But finding a solution might take longer than that, officials said.

Austrian Chancellor Sebastian Kurz said it was an absolute necessity to link the distribution of European funds to rule-of-law standards in member states, especially when the sums to be handed out were so vast. The nationalist governments in Budapest and Warsaw are against linking EU money and respect for the rule of law because they are under a formal EU process investigating them for undermining the independence of courts, media and non-governmental organizations.

If the link, introduced by EU leaders in July and strengthened by the European Parliament, remains, both countries risk losing access to tens of billions of euros in EU funds.

“Poland is counting on a rational approach of our partners and on working out rules which would allow to reach an agreement,” a Polish government spokesman said.

Without unanimous consent on the 1.8 trillion euro package, no EU country can get its money, giving Warsaw and Budapest strong leverage to pressure others to back its plan.