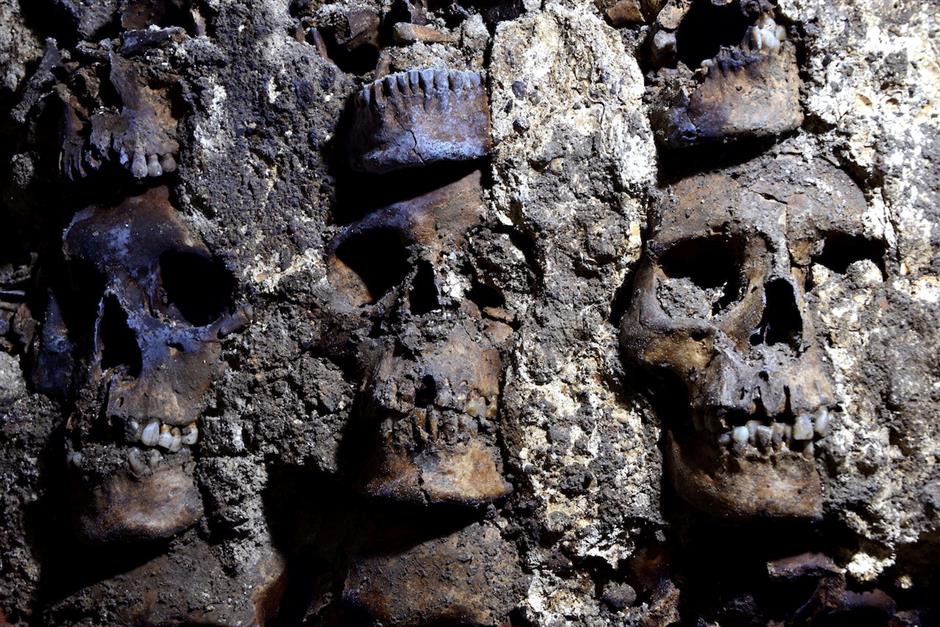 A photo shows parts of an Aztec tower of human skulls, believed to form part of the Huey Tzompantli, a massive array of skulls that struck fear into the Spanish conquistadors when they captured the city under Hernan Cortes, at the Templo Mayor archaeology site, in Mexico City, Mexico.

Mexican archeologists said they had found remains of 119 more people in a centuries-old Aztec “tower of skulls” in the heart of the capital.

The new discovery was announced after an eastern section of the Huei Tzompantli was uncovered along with the outer facade, five years after the northeastern side was found.

Archeologists believe many of the skulls belonged to captured enemy warriors and that the tower was intended as a warning to rivals of the Aztec empire, which was overthrown by Spanish conquistadors in 1521.

Some of the remains could be of people who were killed in ritual sacrifices to appease the gods.

The tower, 4.7 meters in diameter, is thought to have been built around the end of the 15th century. It is located in the area of the Templo Mayor, one of the main temples of the Aztec capital Tenochtitlan in the historic district of modern-day Mexico City.

In total, more than 600 skulls have now been found at the site, which Mexican authorities have described as one of the country’s most important archeological discoveries in years.