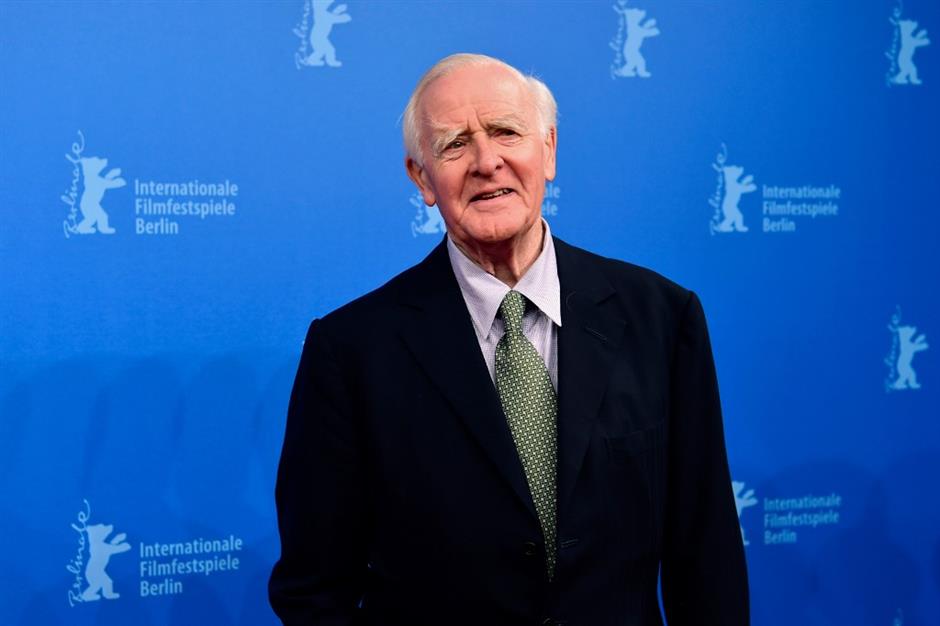 In this file photo taken on February 18, 2016 British author John le Carre (David John Moore Cornwell) attends a screening of Berlinale Special Series "The Night Manager" during the 66th Berlinale Film Festival in Berlin. John Le Carre, the British writer best known for his Cold War espionage novels "Tinker, Tailor, Soldier, Spy" and "The Spy Who Came In From The Cold", has died aged 89, his agent said on December 13, 2020.

John le Carre, the British writer best known for his Cold War espionage novels "Tinker Tailor Soldier Spy" and "The Spy Who Came In From The Cold", has died aged 89, his agent and family said Sunday.

His wife of nearly 50 years, Jane, and sons Nicholas, Timothy, Stephen and Simon, said in a statement that he died on Saturday night after a short battle with pneumonia.

"We all grieve deeply his passing," they said, thanking staff at the hospital in Cornwall, southwest England, for their care. "We know they share our sadness," they added.

"Tinker Tailor Soldier Spy" was adapted for television in 1979, with Alec Guinness starring as the enigmatic spycatcher George Smiley, and became a classic. Gary Oldman reprised the role in the 2011 film, winning an Oscar the following year.

"All who follow are in his debt," Oldman said in a statement. "His characters were drawn deftly and deeply... For me, inhabiting George Smiley remains one of the highpoints of my life."

His friend, the novelist Robert Harris, called le Carre "one of those writers who really was not only a brilliant writer but he also penetrated popular culture — and that's a great rarity".

Harris told Sky News television "The Spy Who Came In From The Cold" was a "masterpiece".

"It's an incredibly engrossing tale and very deep, and it transformed the writing of spy fiction. It was a brilliant, psychological portrait of spying and of betrayal and of the decline of British power."

Stephen King, the best-selling US author, called le Carre "a literary giant and a humanitarian spirit".

Jonny Geller, le Carre's literary agent, said: "His like will never be seen again, and his loss will be felt by every book lover, everyone interested in the human condition.

"We have lost a great figure of English literature, a man of great wit, kindness, humour and intelligence. I have lost a friend, a mentor and an inspiration."

Le Carre's life could have been the stuff of fiction and he once said he owed his career in the shadows and later literary success to an "impulsive adolescent decision" to flee an unhappy home life.

It involved a spell in Bern, Switzerland, learning German, where he took his first steps in British intelligence, doing odd-jobs across the border in Austria.

From Switzerland, he returned to Britain to study at Oxford University, then went on to teach at the elite Eton school before joining MI5, the country's domestic intelligence agency, in the late 1950s.

He later transferred to the overseas spy agency MI6, serving in the West German capital Bonn, where he witnessed the building of the Berlin Wall.

It was as an MI6 officer that he had his first success with "The Spy Who Came in from the Cold" in 1963. For obvious reasons, he had to use a pseudonym.

"I was asked so many times why I chose this ridiculous name, then the writer's imagination came to my help," he told The Paris Review in 1996.

"I saw myself riding over Battersea Bridge (in London), on top of a bus, looking down at a tailor's shop... and it was called something of this sort — le Carre."

If Cold War intrigue and its tense, often bleak backdrop made his name and his books best-sellers, le Carre found new subject matter and a litany of characters and causes as the world changed.

They included arms dealers, Russian gangsters, financiers and Big Pharma, which he portrayed in the 2001 novel "The Constant Gardener", later adapted into a film starring Ralph Fiennes and Rachel Weisz.

Despite his establishment education and career, le Carre — a traditionalist who admitted he could not type and wrote by hand — often railed against it.

He turned down a knighthood and was suspicious of literary honours.

An avowed Europhile, he was also an outspoken critic of Brexit, and at the last general election in 2019 told AFP that Britons should "join the resistance" against Prime Minister Boris Johnson.

"My England would be the one that recognises its place in the EU," he told a US interviewer in 2017. "The jingoistic England that is trying to march us out of the EU, that is an England I don't want to know."