Italian forest is a living memorial to virus dead 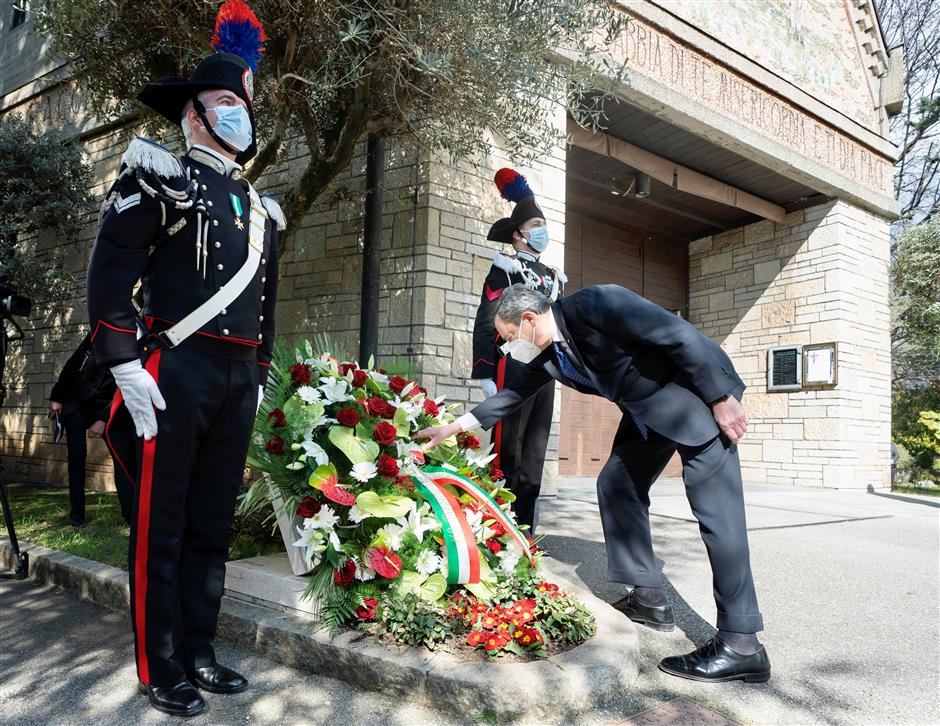 Italian Prime Minister Mario Draghi lays a wreath during a ceremony at the monumental cemetery to honor victims of COVID-19 on Thursday in the northern city of Bergamo.

Italy inaugurated a living monument to its COVID-19 dead on Thursday as it marked the anniversary of one of the most haunting moments of the pandemic: when Bergamo’s death toll reached such heights that an army convoy had to transport coffins out because its cemeteries and crematoriums were full.

Premier Mario Draghi visited the northern city on Thursday to commemorate a national day of mourning for Italy’s coronavirus victims. Flags flew at half-mast around the country and public authorities observed a minute of silence.

Draghi laid a wreath at Bergamo’s cemetery and inaugurated a forest named in honor of the more than 100,000 victims in Italy, the first country in the West to be hit by the outbreak.

“This wood doesn’t only contain only the memory of the many victims,” Draghi said.

“This place is a symbol of the pain of an entire nation.”

At the Wood of Memory, Bergamo Mayor Giorgio Gori said the city had decided against a memorial or a piece of artwork to commemorate its dead.

“We decided to honor victims with a work that is alive, with a monument that breathes,” he told the handful of dignitaries gathered on a windy lawn surrounded by the first 100 freshly planted saplings.

The anniversary came as much of Italy including Bergamo is under new lockdown, with schools and restaurants shuttered, amid a new surge of infections. And it comes as Italy’s halting vaccination campaign has slowed down further because of the suspension of AstraZeneca shots pending review.

The prime minister told the Bergamo gathering that whatever the European Medicines Agency decides, Italy would intensify its inoculation campaign and that expected increases in deliveries “will help compensate for the delays by pharmaceutical firms.”

Footage of the army convoy snaking its way through Bergamo’s roads on March 18, 2020 remains one of the most heart-wrenching and iconic images of the pandemic.

It joined the photo of an exhausted Cremona nurse collapsed on her computer keyboard after a shift, and more recently, an image of a Rome-area bistro owner sitting hunched over in her restaurant kitchen after the latest lockdown.

For Bergamo, though, the army convoy was early evidence of the outsized toll the first weeks of the outbreak had on what would become the hardest-hit province: By March 18, 2020, Italy had recorded 2,978 deaths — nearly 2,000 in Lombardy.

The province of Bergamo had a 571 percent increase in deaths compared with the five-year monthly average — the biggest increase in Italy and one of the biggest localized increases in mortality in Europe.