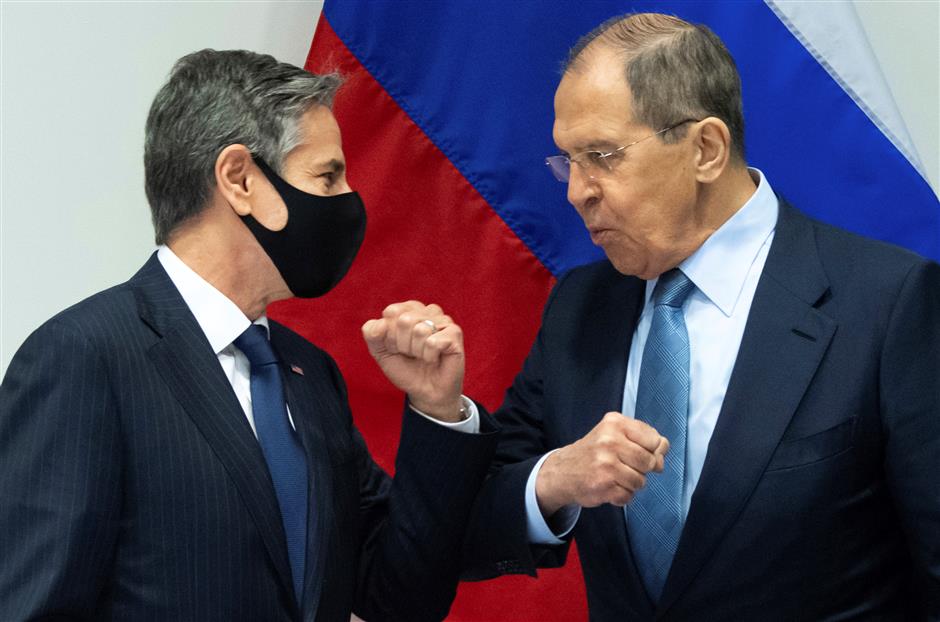 US Secretary of State Antony Blinken (left) greets Russian Foreign Minister Sergey Lavrov as they arrive for a meeting at the Harpa Concert Hall in Reykjavik, Iceland on Wednesday.

Top diplomats from the United States and Russia sparred politely in Iceland during their first face-to-face encounter, which came as ties between the countries have deteriorated sharply in recent months.

US Secretary of State Antony Blinken and Russian Foreign Minister Sergey Lavrov spoke frankly but calmly of their differences as they held talks on the sidelines of an Arctic Council meeting on Wednesday in the Icelandic capital of Reykjavik, a city with deep history in US-Russian relations.

“We seek a predictable, stable relationship with Russia,” Blinken told Lavrov, echoing comments made by US President Joe Biden.

"It's also no secret that we have our differences and when it comes to those differences,” he added.

A senior US official called the meeting “a good start” with “no polemics” that had allowed both sides to “tee-up a lot of the issues that the two presidents may have the opportunity to discuss.”

After the meeting, which ran for a longer-than-expected hour and 45 minutes, Lavrov told Russian reporters the talks had been “constructive” and that Russia has proposed starting a new and broad strategic bilateral talk.

“There is a lot of rubble, it’s not easy to rake it up, but I felt that Antony Blinken and his team were determined to do this. It will not be a matter for us,” the Russian FM said.

Biden and Putin have agreed in principle to hold their first summit, possibly in June in Europe following a G7 summit and a NATO leaders’ meeting. On Monday, Blinken said he expected the summit to happen in the next few weeks. But asked after the meeting if Russia had formally agreed to the summit, Lavrov did not reply.

There were some signs of thawing relations just before the meeting.

In a letter to Congress, Bliken said that waiving the original sanctions mandated by Congress for Swiss-based Nord Stream 2 AG, and its chief executive Matthias Warnig, “is in the national interests of the United States.”

The ruling was a significant reversal of Washington’s earlier stance on the project. Former US President Donald Trump’s administration had long time promoted US gas and openly criticized European countries for buying energy from Russia.

The 1,200-kilometer pipeline, which is more than 95 percent complete, will run beneath the Baltic Sea and double Russian natural gas shipments to Germany, Europe’s largest economy.

Russian giant Gazprom has a majority stake in the project, working alongside an international consortium that includes Germany’s Wintershall and Uniper groups, Dutch-British giant Shell, France’s Engie and Austria’s OMV.

The new pipeline follows the route of the original Nord Stream 1 pipeline, which began operations in 2011.