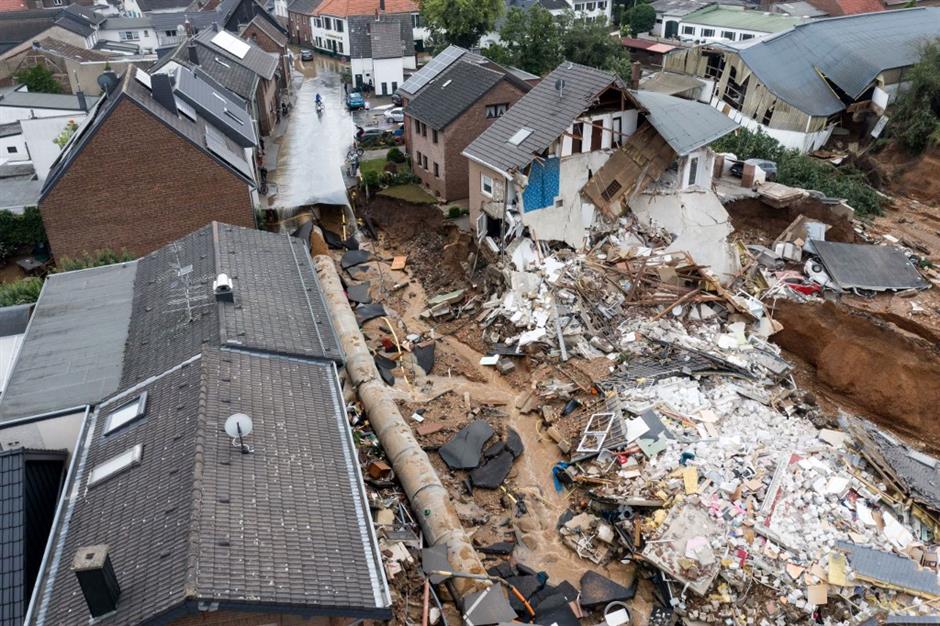 An aerial view shows an area completely destroyed by the floods in the Blessem district of Erftstadt, western Germany, on July 16, 2021. The death toll from devastating floods in Europe soared to at least 126 on July 16, most in western Germany where emergency responders were frantically searching for missing people.

The death toll from the flood disaster triggered by heavy rainfall in western and southern Germany has risen to more than 100 as of Friday noon local time, according to police and local authorities.

The federal states of North Rhine-Westphalia and Rhineland-Palatinate were hit particularly hard, with 43 people and 60 people killed respectively.

"It is a national disaster," said Malu Dreyer, minister president of Rhineland-Palatinate at a press conference, adding that "people can count on all forces in the country to stand together."

A large number of people are still missing. The district of Ahrweiler alone currently estimates about 1,300 missing people, while around 3,500 are being treated in care facilities. "Due to the complex damage situation, a final assessment of the situation is not yet possible," the district announced via Twitter.

North Rhine-Westphalia's minister president Armin Laschet said that ways would need to be found to get roads, bridges and other infrastructure up and running again. "A great national effort is required so that the worst things are quickly removed."

More storms and heavy rainfall are expected to hit Rhineland-Palatinate and the federal state of Saarland over the course of Friday. The German Weather Service (DWD) warned of local thunderstorms with precipitation between 15 and 25 liters per square meter as well as hail and gale-force winds.