China respects the Afghan people's choice and hopes for a smooth transition in the country, a foreign ministry spokesperson said on Monday.

The Taliban said on Sunday that the war in Afghanistan has ended and they will soon declare the establishment of the Islamic Emirate of Afghanistan. They will take responsible actions to ensure the safety of Afghan citizens and foreign missions in the country.

In response, spokesperson Hua Chunying said the situation in Afghanistan has undergone major changes and China respects the wishes and choices of the Afghan people.

China expects the Taliban to fulfill its commitment to ensure a smooth transition in Afghanistan, curb all kinds of terrorist and criminal acts, keep the Afghan people away from wars and rebuild their beautiful homeland, she said.

To a question whether China was in contact with the Taliban and recognizes the Taliban regime, Hua said China has maintained contact with the Afghan Taliban on the basis of fully respecting Afghan national sovereignty and the will of all factions in the country, and has always played a constructive role in promoting political settlement of the Afghan issue.

"We hope the Taliban will unite with all parties and ethnic groups in Afghanistan to establish a broad and inclusive political structure that suits its own national conditions to lay the foundation for realizing a lasting peace in Afghanistan," the spokesperson added.

On many occasions, the Taliban has expressed the hope of developing sound relations with China, saying they look forward to China's participation in the reconstruction and development of Afghanistan, and that they will never allow any forces to use the Afghan territory to endanger China, according to Hua.

She said that China always respects the sovereign independence and territorial integrity of Afghanistan, has never interfered in the internal affairs of Afghanistan, and always pursued a friendly policy toward all the Afghan people.

"China respects the right of the Afghan people to independently determine their own destiny, and stands ready to develop good-neighborly, friendly and cooperative relations with Afghanistan."

The United States and several European countries are evacuating their embassy staff from the country. But Hua said the Chinese embassy in Afghanistan is still operating normally, and the Chinese ambassador and embassy staff are performing their duties as usual.

Most of the Chinese citizens in Afghanistan have already returned home as per arrangements made by the Chinese embassy, but there are a few who have chosen to stay there voluntarily. The embassy is in touch with them, Hua said. 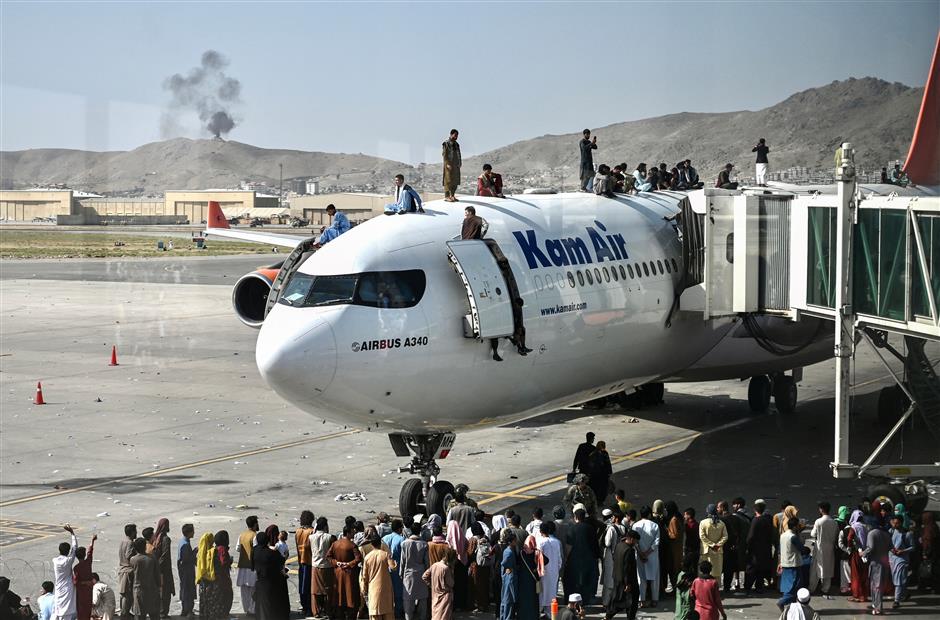 Afghan people climb atop a plane while waiting at Kabul airport on Monday, after a stunningly swift end to Afghanistan's 20-year war, as thousands tried to flee Taliban's hard-line Islamist rule.

The Taliban swept into Kabul on Sunday after President Ashraf Ghani fled the country, bringing a stunning end to a two-decade campaign in which the US and its allies had tried to transform Afghanistan. The country's Western-trained security forces collapsed or fled in the face of an insurgent offensive that tore through the country in just over a week, ahead of the planned withdrawal of the last American troops at the end of the month.

In the capital, a tense calm set in, with most people hiding in their homes as the Taliban deployed fighters at major intersections. Many fear a return to the kind of brutal rule the Taliban imposed when it was last in power. They raced to Kabul's international airport, where the "civilian side" was closed until further notice, according to Afghanistan's Civil Aviation Authority. The military was put in control of the airspace.

Videos circulating on social media showed hundreds of people running across the tarmac as US soldiers fired warning shots in the air.

Senior US military officials, who spoke on condition of anonymity to discuss the ongoing operation, told The Associated Press that the chaos left seven dead, including several who fell from the flight.