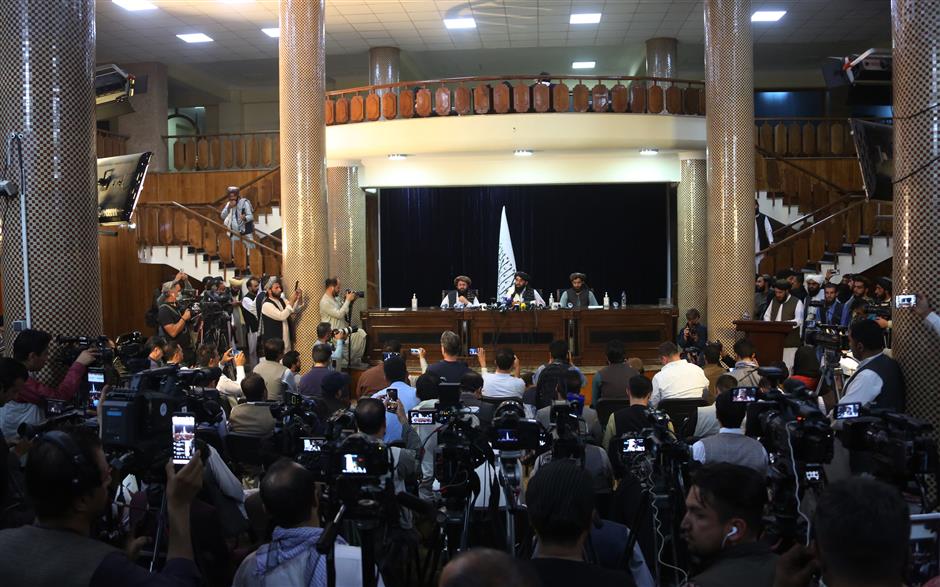 The Taliban did not want to have any internal or external enemies, and intended to form an inclusive government in Afghanistan, a Taliban spokesman said on Tuesday.

At its first press conference since the Taliban's takeover of most parts of Afghanistan on Sunday, the group's spokesman Zabihullah Mujahid said they did not want any internal or external enemies, and they wanted to have good relations with everybody to develop economy and achieve prosperity.

"Afghanistan will have a strong, Islamic government," he said, adding that no Afghan politicians would be ignored in the new government.

The Taliban leadership was working and consulting on the name and specification of the new government, he told the televised press conference.

The spokesman promised to ensure the safety of people who worked with the United States and allied forces.

He said Afghanistan's interactions with foreign countries would continue, and the Taliban would use the country's natural resources for reconstruction.

Afghanistan would be drug free if the international community provided alternative crops for the country, he added. "All borders are under Taliban's control."

He also said the Taliban would allow women in Afghanistan to work and study based on the Islamic law, and they would be offered with all rights within the Islamic principles, because women are vital parts of the society.

Afghan President Mohammad Ashraf Ghani left the country on Sunday night, as the Taliban fighters entered Kabul and took control of the capital.

In another development, Mullah Abdul Ghani Baradar, political chief of Taliban, returned to Afghanistan from Qatar on Tuesday.

Another Taliban spokesman Mohammad Naeem said on Twitter that a delegation led by Baradar had landed at Kandahar in southern Afghanistan.