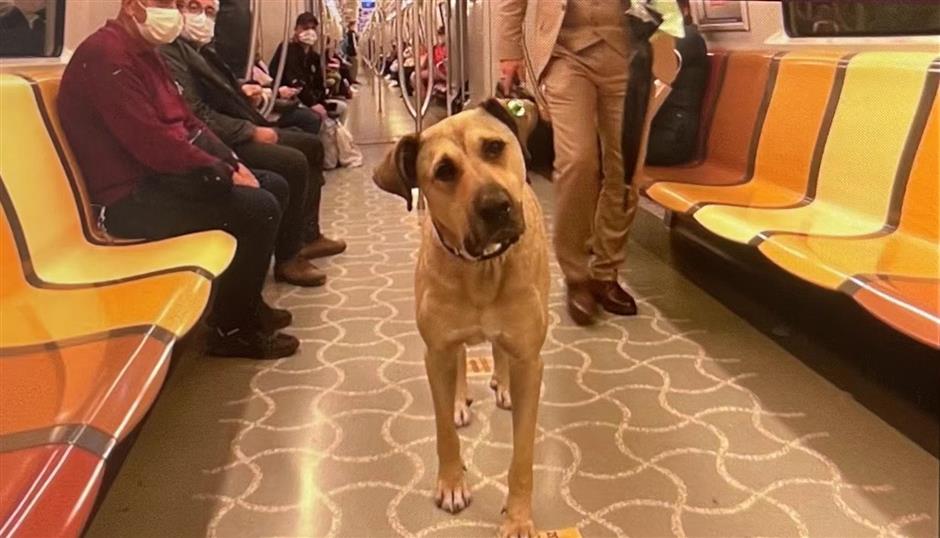 Marking World Animal Day on Monday, local residents have been telling the story of a stray dog named Boji who regularly walks around the city on public transport each day in Turkey's largest city Istanbul.

The buzz started two months ago when several citizens noticed the dog commuting in public vehicles, such as ferries, subways, trams, and buses, and shared her photos through social media.

After that, the Istanbul municipal teams found her on a tram. She went through a medical check-up, and the veterinary attached a tracking device below the skin to trace Boji and ensure her safety.

The data obtained from this tracking system revealed that Boji makes at least 40 km each day on public commuter vehicles, traveling in up to 30 stops, the Istanbul municipality's press office told Xinhua.

According to the municipality, Boji knows the subway travel rules, giving way to the disembarking passengers and waiting in line to enter the train calmly, and finds a place for herself.

She now has a Twitter account which shares her journeys and photos across the city each day in different public transportation means.

"Hi, I'm Boji of Istanbul. Just like millions of my fellow Istanbulites, I use the municipality's public transport services every day," Boji "said" in one of her photos. "Come and say hi if you spot me on a bus, metro train, or a ferry."

Another photo of Boji, showing her waiting on a subway stop, reads "for safety in the subway, I do not cross the yellow line."

Boji took her name from railway terminology, bogie, which means "a frame placed under the trains," according to Adnan Aldemir, general manager of Tram Operations of Metro Istanbul.

"And she is called Boji as she mostly sleeps in the bogie area," he noted.

Marking World Animal Day on October 4, the municipality said in a written message that Istanbul is a "very big family" with its stray cats, dogs, seagulls, and its people. "The city belongs to all of us," it read.

"On World Animal Day, a day of action for animal rights, it is very nice that many people of Istanbul share the stories of this beautiful dog and send photos of her to each other," an Istanbul resident Nilgun Kilinc said while following Boji on Twitter.