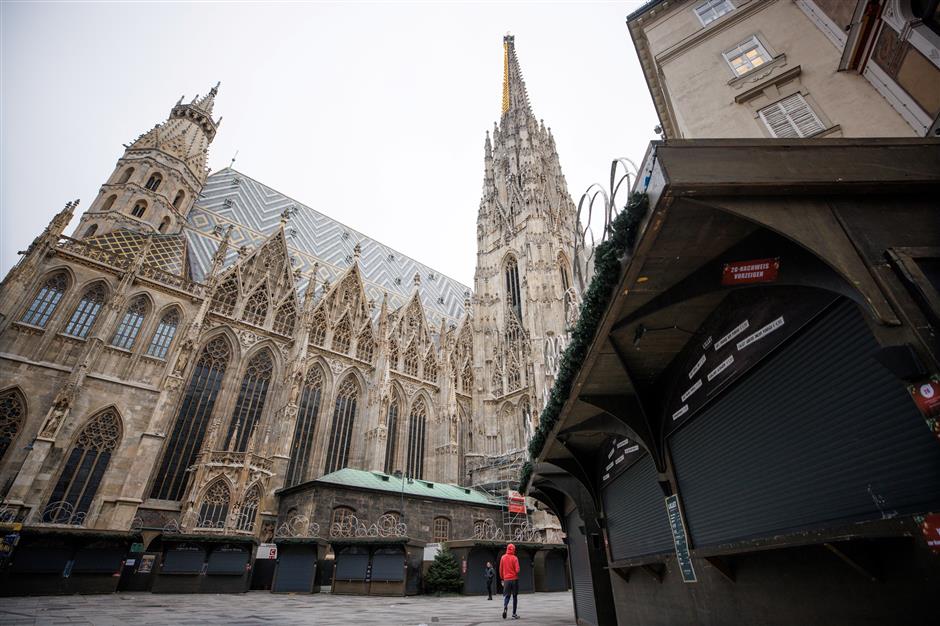 Stalls of a closed Christmas market are seen in front of St Stephen's Cathedral in Vienna, Austria yesterday as the country returns to a nationwide partial lockdown during the coronavirus pandemic.

Austria powered down public life on Monday as its fourth national COVID-19 lockdown began, making it the first western European country to reimpose the drastic and unpopular measure this autumn in the face of surging coronavirus infections.

The lockdown is the first introduced since vaccines became widely available. Most places people gather, like restaurants and bars, cannot open their doors for 10 days initially and maybe as many as 20, the government says.

Christmas markets, a big draw for tourists that had only just begun to open, also shut but, in a last-minute change, ski lifts remained open to the vaccinated. Hotels, however, closed to tourists not already staying there when the lockdown began.

"I'm really tired of these lockdowns. I've just had enough," a 42-year-old lawyer who gave her name only as Irena said on her way to work in central Vienna.

Asked whether a lockdown could have been avoided, she said: "If you look at other countries, I think so... The political leadership definitely failed on all levels."

Vienna's streets were quieter than usual on a chilly, overcast Monday as many shops stayed shut but people went to work. The government is urging people to work from home where possible.

Around 40,000 people, many of them supporters of the far-right Freedom Party, protested in the city against coronavirus restrictions on Saturday. The protests were largely peaceful and the police made six arrests, in contrast to weekend clashes in Brussels and across the Netherlands .

As the working week resumed, the mood was more resigned than defiant.

"It's like a luxury prison. It's definitely limited freedom and for me it's not great psychologically," said Sascha Iamkovyi, a 43-year-old entrepreneur in the food sector.

"People were promised (by the government) that if they got vaccinated they would be able to lead a normal life but now that's not true."

Roughly 66 percent of Austria's population is fully vaccinated against COVID-19, one of the lowest rates in western Europe. Many Austrians are sceptical about vaccinations, a view encouraged by the far-right Freedom Party, the third-biggest in parliament.

The government imposed a lockdown on the unvaccinated last week but daily infections kept rising far above the previous peak reached a year ago and intensive care beds are running short.

On Friday, the conservative-led government said it was reimposing a full lockdown and would make it compulsory to get vaccinated as of Feb. 1, a step few countries have taken.

"It is a situation where we have to react now," Health Minister Wolfgang Mueckstein told ORF TV on Sunday night.

"A lockdown, a relatively tough method, a sledgehammer, is the only option to reduce the numbers (of infections) here."

People can leave home for a limited number of reasons like going to work or buying essentials. Going for a walk is allowed with no limit on time or distance. Only one person from another household can be met at a time.