Rescuers were desperately searching for survivors early Sunday after dozens of devastating tornadoes tore through six US states, leaving at least 83 people dead, dozens missing and towns in ruin.

President Joe Biden called the wave of tornadoes, including one that traveled more than 200 miles, "one of the largest" storm outbreaks in American history.

"It's a tragedy," a shaken Biden, who pledged support for the affected states, said in televised comments. "And we still don't know how many lives are lost and the full extent of the damage."

Scores of search and rescue officials were helping stunned citizens across the US heartland sift through the rubble of their homes and businesses overnight.

More than 70 people are believed to have been killed in Kentucky alone, many of them workers at a candle factory, while at least six died in an Amazon warehouse in Illinois where they were on the night shift processing orders ahead of Christmas.

"This event is the worst, most devastating, most deadly tornado event in Kentucky's history," said state governor Andy Beshear, adding he fears "we will have lost more than 100 people."

"The devastation is unlike anything I have seen in my life, and I have trouble putting it into words," he told reporters.

Beshear has declared a state of emergency.

The tornado that smashed through Kentucky had rumbled along the ground for over 200 miles (320 kilometers), Beshear said, one of the longest on record.

The longest a US tornado has ever tracked along the ground was a 219-mile storm in Missouri in 1925. It claimed 695 lives. 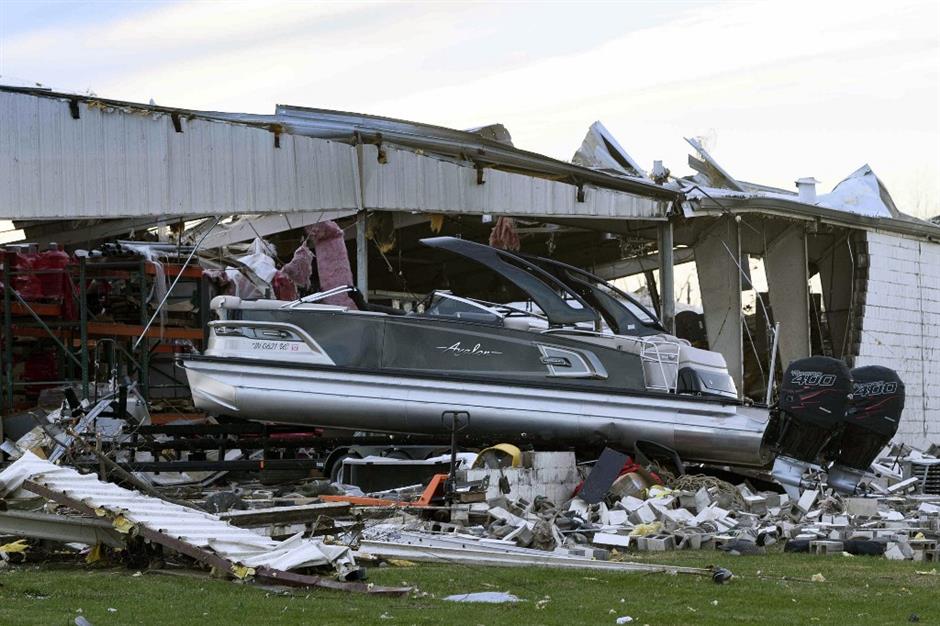 A boat sits at rest after being sucked out of a marine dealership by a tornado in Mayfield, Kentucky, on December 11, 2021. The western Kentucky town of Mayfield was "ground zero" of the storm – a scene of "massive devastation," one official said.

The western Kentucky town of Mayfield was reduced to "matchsticks," its mayor Kathy O'Nan told CNN.

The small town of 10,000 people was described as "ground zero" by officials, and appeared post-apocalyptic: city blocks leveled; historic homes and buildings beaten down to their slabs; tree trunks stripped of their branches; cars overturned in fields.

Some Christmas decorations could still be seen by the side of the road.

Beshear said there were 110 people working at the candle factory when the storm hit, causing the roof to collapse.

Forty people have been rescued, but it would be "a miracle if anybody else is found alive," he said.

CNN played a heart-rending plea posted on Facebook by a factory employee.

"We are trapped, please, y'all, get us some help," a woman says, her voice quavering as a co-worker can be heard moaning in the background.

"We are at the candle factory in Mayfield... Please, y'all. Pray for us."

The woman, Kyanna Parsons-Perez, was rescued after being pinned under a water fountain.

David Norseworthy, a 69-year-old builder in Mayfield, said the storm blew off his roof and front porch while the family hid in a shelter.

"We never had anything like that here," he told AFP.

In one demonstration of the storms' power on Saturday, when winds derailed a 27-car train near Earlington, Kentucky, one car was blown 75 yards up a hill and another landed on a house. No one was hurt.

Reports put the total number of tornadoes across the region at around 30.

At least 13 people were killed in other storm-hit states, including at an Amazon warehouse in Illinois, bringing the total toll to 83.

In Arkansas, at least one person died when a tornado "pretty much destroyed" a nursing home in Monette, a county official said.

Another person died elsewhere in the state.

Four people died in Tennessee, while one died in Missouri. Tornadoes also touched down in Mississippi.

Biden said he planned to travel to the affected areas.

He said that while the impact of climate change on these particular storms was not yet clear, "we all know everything is more intense when the climate is warming, everything."

More than half a million homes in several states were left without power, according to PowerOutage.com.

This combination of pictures created on December 11, 2021 shows handout satelite images released by Maxar Technologies on December 11, 2021, an overview of an Amazon warehouse after (top) tornadoes hit the region and before (bottom) on September 24, 2021 in Edwardsville, Illinois.

One of the tornadoes hit the Amazon warehouse in the southern Illinois city of Edwardsville, with around 100 workers believed to have been trapped inside.

"We identified 45 personnel who made it out of the building safely, one who had to be airlifted to a regional hospital for treatment, and six fatalities," Edwardsville fire chief James Whiteford told reporters.

But he said the operation had turned from rescue to focus "only on recovery," fuelling fears the toll could yet rise.

Amazon chief Jeff Bezos said he was "heartbroken" at the deaths, tweeting: "Our thoughts and prayers are with their families and loved ones."