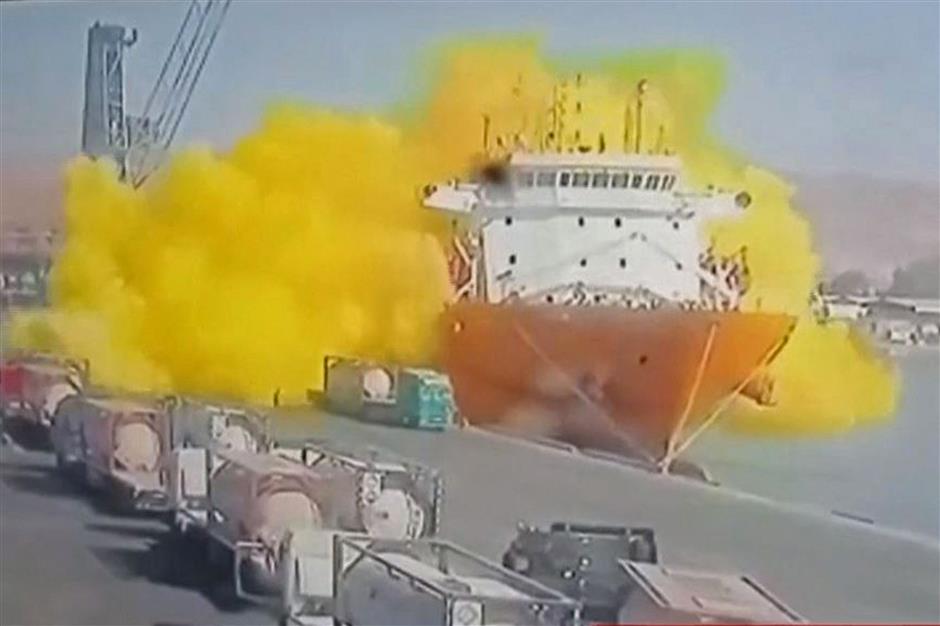 This image grab taken from a CCTV footage broadcasted by Jordan's Al-Mamlaka TV on June 27, 2022, shows the moment of a toxic gas explosion in Jordan's Aqaba port.

Twelve people were killed and 251 others injured on Monday in a chemical gas leak from a container at Jordan's Aqaba port, Jordan state TV reported.

Jordan opened a large field hospital in Aqaba to treat those injured in the toxic gas leakage as the Red Sea port city's hospitals have reached full capacity, according to the state-run Al Mamlaka TV.

Director of Aqaba Health Department Jamal Obeidat said those injured are in moderate to serious medical conditions, according to Al Mamlaka TV.

He warned Aqaba residents to remain at home, saying that the danger of the toxic gas leakage is still there.

Kamal Kreisha, a receptionist at the Prince Hashem bin Abdullah Military Hospital in Aqaba, said all staff in the hospital were working hard to handle the flow of the injured.

"All Aqaba hospitals are full... we have enough medical equipment and oxygen supply at hospitals, but there is panic and the relatives of the injured are flocking to hospitals," he told Xinhua.

Samer Zbeideh, a resident of Aqaba who works as a teacher, told Xinhua that the situation is scary.

"I am staying home with my wife and two daughters. We closed the windows and the doors and we are watching the news... we hope this will be solved very soon. It is a tragic incident," he told Xinhua.

Jordan's Prime Minister Bisher Khasawneh arrived in Aqaba Monday evening to follow up firsthand on the efforts to deal with the repercussions of the explosion of a gas tank, the state-run Petra news agency reported.

Khasawneh expressed his deepest condolences and sympathy to the victims' families and wished a speedy recovery for the injured.

Khasawneh has directed Interior Minister Mazen Faraya to lead a team to investigate the incident, according to a statement by the Prime Ministry.