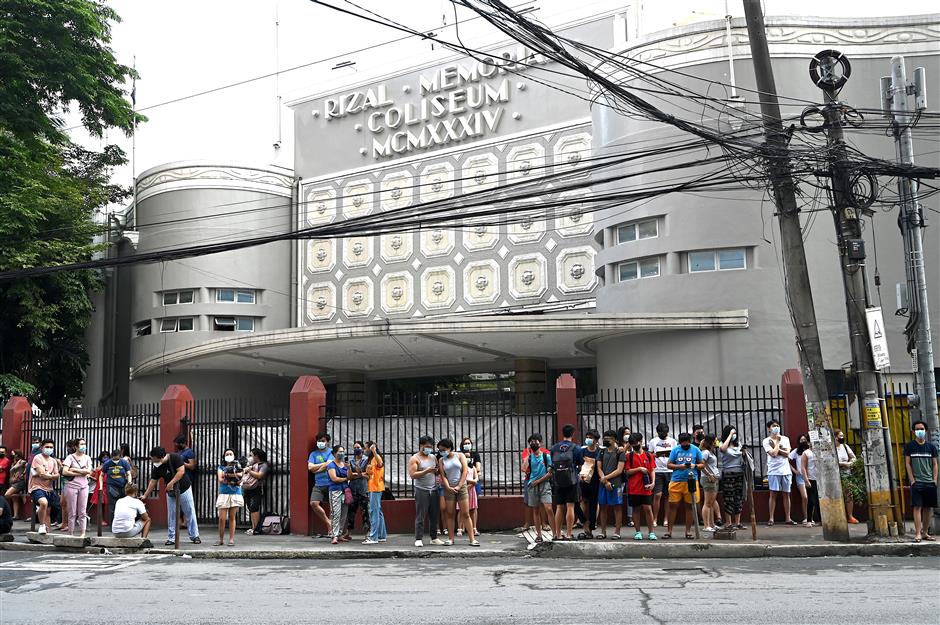 Residents evacuate their buildings after a 7.1 magnitude earthquake, some 300 kilometers away, was felt in Manila on July 27, 2022.

A 7-magnitude earthquake that rattled the main Luzon island in the Philippines on Wednesday killed at least two and injured some 30 others, government officials said.

The National Disaster Risk Reduction and Management Council (NDRRMC) confirmed the death of one person in Benguet province in the northern Philippines. Local authorities also reported that at least five people were injured in Benguet province.

Governor of Abra province Jocelyn Bernos said a 25-year-old male was also killed after he was pinned by a concrete slab in Bangued town. She told a local radio interview that at least 25 were slightly injured from the earthquake.

The Philippine Institute of Volcanology and Seismology (PHIVOLCS) said a 7-magnitude earthquake rattled Abra province in the northern Philippines at 8:43am local time (0:43am GMT).

The institute first reported the magnitude as 7.3 and the epicenter was Lagangilang town. An updated report changed the epicenter to Tayum town, adding the quake hit at a depth of 17 km.

The tremor was felt in many areas on the main Luzon Island, including Metro Manila, where high-rise buildings swayed and train transport suspended operation. It was also felt in many provinces, including Ilocos Sur, Pangasinan, Nueva Vizcaya, Bulacan, Laguna and Cavite.

In the capital region, panicked employees in offices, including the presidential palace, ran out of the buildings.

Mayor of La Paz town in Abra province Joseph Bernos said the quake damaged many concrete houses, buildings and infrastructure in the province. "I received reports that there were massive damages in our province," he told a radio interview, adding that some buildings at the University of Abra were also damaged.

The tremor also caused damages to the century-old structures in Vigan City, in Ilocos Sur province, a tourist destination known for its preserved Spanish colonial and Asian architecture on the west coast of Luzon island.

A local disaster official of Baguio City, also in the northern Philippines, said Kennon Road, a major road connecting the city and Manila, was closed while the damage was being assessed.

PHIVOLCS cheif Renato Solidum warned the tectonic quake would trigger aftershocks and could cause damage such as landslides. He urged the people and the local government officials to be vigilant.

"Make sure to inspect the buildings for cracks and watch out for landslides, especially when it rains," he told a news conference, urging villagers to leave areas prone to landslides.

The Philippines has frequent seismic activity due to its location along the Pacific "Ring of Fire."

On July 16, 1990, northern Luzon was shaken by a 7.8-magnitude earthquake that caused a 125-km-long ground rupture that stretched from Aurora province to Nueva Vizcaya, killing around 1,200 people and damaged scores of buildings and houses.