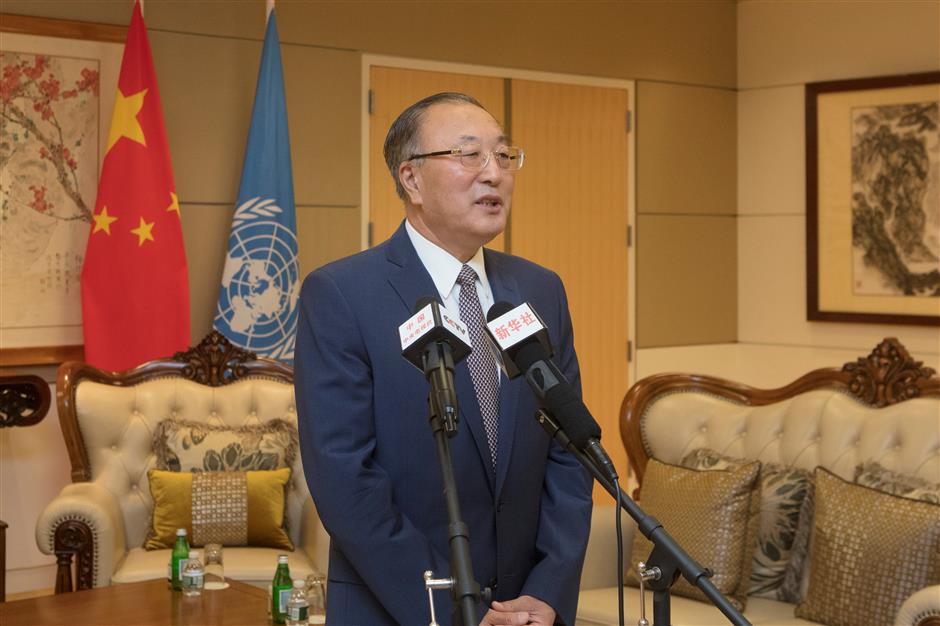 China on Monday assumed the rotating presidency of the Security Council for August with the priorities of facilitating dialogue and cooperation for common security and supporting Africa's capacity-building for sustaining peace.

Amid a shifting international landscape, the Security Council must revisit the role of dialogue and cooperation for common security, said Zhang Jun, China's permanent representative to the United Nations.

"The council must reaffirm its mission of maintaining common security and fulfill its due responsibilities. Therefore, China has proposed to hold a briefing on August 22 on the theme of 'Maintenance of international peace and security: promote common security through dialogue and cooperation,'" he told a press briefing on the Security Council's August work program.

"Through such discussions, we hope we can forge some basic consensus on this important issue, and we will understand better that our humanity shares the same future, shares the same world, and any country's security is indivisible from (that of) others, and we are an indivisible security community. We hope that by working together, we can jointly maintain world peace and global security, we can also oppose bloc politics, oppose confrontation and make sure that we are all working toward the same direction," he said.

The second priority will be to support Africa's capacity-building to sustain peace, said Zhang.

He said that many African countries are facing myriad crises, such as the COVID-19 pandemic, war and conflict, climate change, and higher energy and food prices.

China has proposed an open briefing on August 8 on the theme of "Peace and security in Africa: capacity-building for sustaining peace." The aim is to help all parties better understand the African continent's difficulties and adopt measures to address their root causes.

The Chinese presidency's third priority is strengthening mediation efforts for the political settlement of hot-spot issues. The fourth priority is to uphold the openness, inclusiveness, solidity and cooperation of the Security Council, said Zhang.

China attaches great importance to its presidency of the Security Council. It will adopt a responsible and constructive approach, uphold genuine multilateralism, strengthen communication and consultation with council members and all other parties, and earnestly perform its presidential duties, he said.

"I hope through our efforts, the council will better meet the expectations of all parties, strengthen solidarity and cooperation, and better play its role in maintaining world peace, safeguarding common security and addressing current challenges."

Replying to questions, Zhang said China is a firm supporter of the United Nations in its role in addressing global challenges, upholding peace and security, and promoting common development.

On nuclear submarine cooperation between the United States, the United Kingdom and Australia (AUKUS), Zhang said that such a move involves the transfer of weapon-grade enriched uranium and related technologies and equipment. Such an act violates the purposes and principles of the Nuclear Non-Proliferation Treaty. It poses serious risks of nuclear proliferation and may provoke an arms race in the region, threatening regional security and stability.

On many occasions, the United States and the United Kingdom have expressed their concerns over the nuclear issues in Iran and the Korean Peninsula while condoning AUKUS cooperation. This is a pure double standard, he said.

On the Korean Peninsula nuclear issue, Zhang said that with their continued joint military exercises, some countries have increased the risk of military confrontation and tensions on the peninsula.

In recent years, the Democratic People's Republic of Korea (DPRK) had taken some steps to denuclearize, and the previous US administration also took a positive step forward in relations. But dialogue has since stalled. It is hoped that the DPRK and the United States will resume direct dialogue as soon as possible. In particular, the US side should take meaningful and practical actions to respond to the DPRK's concerns, he said.

Parties should remain calm and restrained and avoid any actions that could escalate tensions or lead to miscalculations. They should resume dialogue and engagement as soon as possible, meet each other halfway and promote a political settlement to the nuclear issue, said Zhang.

China last held the rotating Security Council presidency in May 2021.