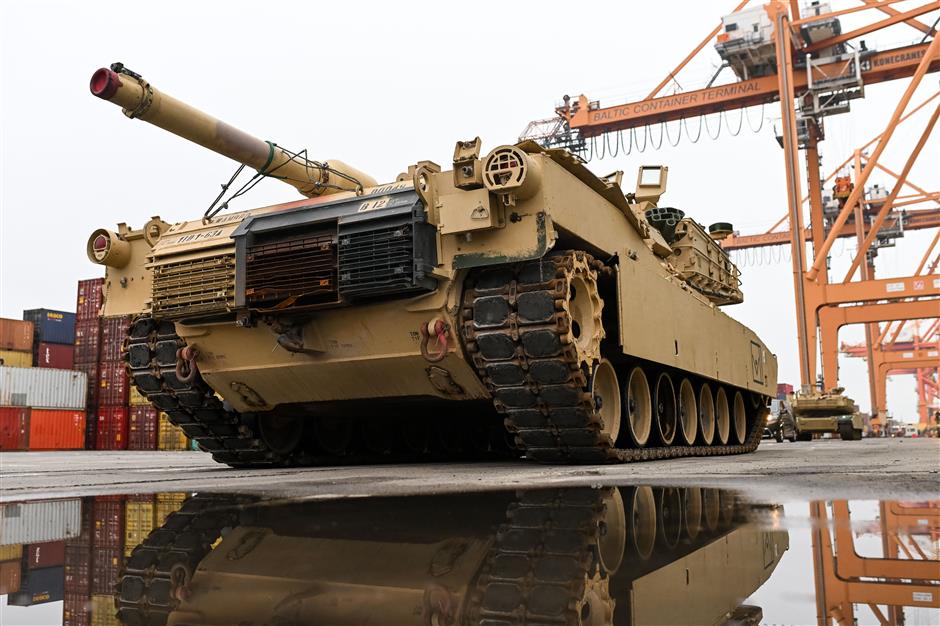 In this file photo taken on December 3, 2022, an M1A2 Abrams battle tank of the US army that will be used for military exercises by the 2nd Armored Brigade Combat Team, is unloaded at the Baltic Container Terminal in Gdynia, Poland.

US President Joe Biden announced on Wednesday that his administration will provide Ukraine with 31 US-made M1 Abrams tanks, which Russia has said will be its target if they were to be used in the ongoing conflict between Moscow and Kiev.

"Today I'm announcing that the United States will be sending 31 Abrams tanks to Ukraine, the equivalent of one Ukrainian battalion," Biden said, addressing the nation in televised remarks from the White House.

Biden said the decision was recommended by Defense Secretary Lloyd Austin, who, together with Secretary of State Antony Blinken, flanked Biden as he spoke. "Because it'll enhance Ukraine's capacity to defend its territory and achieve the strategic objectives," Biden said.

Biden said the United States is also sending Ukraine parts and equipment necessary to sustain the sophisticated tanks, adding that Washington will soon begin to train Ukrainian soldiers on how to operate and maintain the tanks, the delivery of which, he noted, will take time.

The US delivery of M1 Abrams tanks, among the most powerful and capable of the kind in the world, is considered yet another major development in the Ukraine crisis, potentially further escalating the situation as other members of the North Atlantic Treaty Organization (NATO) also intended to aid Ukraine with tanks.

Before the formal announcement by Biden, reports of US provision of the M1 Abrams tanks to Ukraine had already infuriated Russia.

Moscow's ambassador in Washington, Anatoly Antonov, said Tuesday that "if a decision to transfer to Kiev M1 Abrams is made, American tanks without any doubt will be destroyed as all other samples of NATO military equipment."

"If the United States decides to supply tanks, it will be impossible to justify such step using arguments about 'defensive weapons,'" the envoy said. "This would be another blatant provocation against the Russian Federation."

The US commitment came on the heel of the confirmation from Germany that it will deliver 14 Leopard 2 A6 tanks to Ukraine, ending a stalemate where a previously reluctant Germany found itself under increasing pressure from the United States and other allies to authorize tank shipment to Ukraine, which has long demanded such weapons.

Other NATO countries, including Poland, the Netherlands, Norway and Spain, have either committed to or been considering sending Ukraine the Leopard 2 tanks. Britain has already said it will send its Challenger 2 tanks to aid Ukraine's offensive in the conflict with Russia.

Biden said in his remarks that earlier in the day, he spoke with German Chancellor Olaf Scholz, French President Emmanuel Macron, British Prime Minister Rishi Sunak and Italian Prime Minister Giorgia Meloni "as part of our close coordination on support for Ukraine."