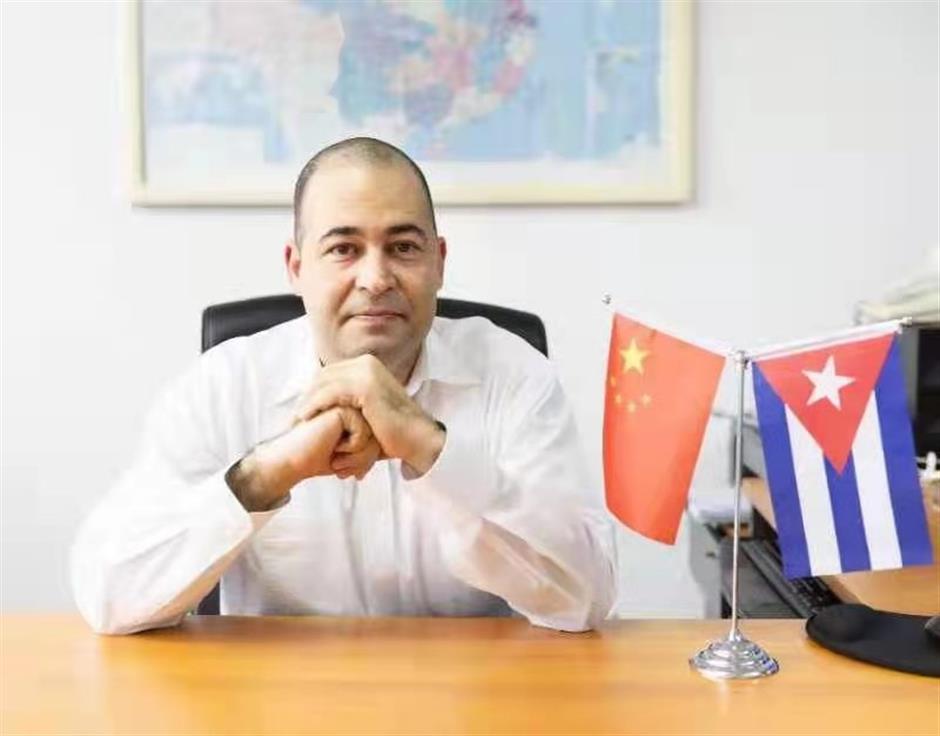 Néstor Enrique Torres Olivera, consul general of the Republic of Cuba in Shanghai

In a recent meeting with researchers and the press, Néstor Enrique Torres Olivera, consul general of the Republic of Cuba in Shanghai, gave an introduction to the political, social and economic situation in Cuba.

The consul general gave the speech while visiting the Shanghai Academy of Social Sciences Think Tank Foundation on Tuesday.

As elsewhere, the pandemic is a major challenge whether for the Cuban people or the government, with daily increments of confirmed cases at 8,000 to 9,000, and deaths at 70 to 80. According to the latest updates, there has been a total of 403,000 confirmed cases and 2,900 deaths.

While the numbers seem formidable, the mortality rate of 0.72 percent is quite low compared with the average 2 percent elsewhere in the world, said the consul general.

First of all, Cuba owns its successful pandemic containment effort to its developed medical care system. Cuba is the only country in Latin America that has developed its own vaccines, with a total of five COVID-19 vaccine candidates. Two of them, Soberana 02 and Abdala, have already been authorized for emergency use.

Of Cuba's population of 11 million, about 2 million have been vaccinated with three jabs, and 9 million of Cubans have received one jab. Clinical tests suggest that one jab of one of the two vaccines has an efficacy of 91 percent, with two jabs at 92.28 percent, much higher than the global average of about 50 percent. Significantly, these vaccines are safe for pregnant women and juveniles.

The rather macabre description of Cuban health situation, as given by the US, is totally inconsistent with the reality and provides no more than another subterfuge for the US to attempt the so-called humanitarian interference in Cuba.

Then the consul general explained what happened on July 11 in Cuba, when some Cubans took to the streets in some cities. The protests were quite limited in scale, and later on were more than eclipsed by pro-government demonstrations. While some protesters vandalized and were involved in damaging public property, there were more of those with grievances to air over the lack of food, medical supplies, and electricity. These lacks should be blamed squarely on the economic sanctions imposed on Cuba by the US since 1962. The pandemic and the sanctions combined have had a serious impact on the normal function of the economy, with the US seeking to weaponize the pandemic against Cuba.

During his four-year tenure, Trump had initiated 243 sanctions against Cuba, which considerably aggravated the economic situation of the country in the grip of the pandemic. The US has also provided international support and financial aid to organizations hostile to Cuban government with the explicit aim at sowing disturbances and chaos there.

As a matter of fact, under the effective leadership of the Cuban Communist Party, all government organs and agencies are functioning in an orderly manner, with the state and government firmly in control of the situation.

The Cuban government has always been committed to improving the livelihood of the people, and is conducting criminal investigation into people involved in the violence that resulted in property damages in the July protests. Of course, the process is wholly open and transparent.

In spite of US sanctions and the ravages of the pandemic, the Cuban government has been consistently emphatic on economic development, pushing forward with its socio-economic reforms to meet the people's aspirations for better life.

Previously the country has been dominated by big state-owned enterprises, but now incentives are being created to encourage private and small enterprises. In the past, salary is more or less fixed, now it is becoming more flexible, leading to "more pay for more work."

If the government listens more to the voice of the grass-roots people, as the government is doing now, the needs of the people have a better chance of being addressed. The pandemic has significantly affected the life of the people, particularly those economically vulnerable.

To sum up, the consul general said, Cuban problems should be addressed by the Cuban people. He also said that the good relations between China and Cuba have been instrumental in fostering good mutual relations in other aspects.

Cuba has participated in all previous China International Import Expo. Cuban President Miguel Diaz-Canel attended the first CIIE held in Shanghai in 2018. More exhibits from Cuba will be on display in a pavilion at the CIIE this year.

The expo has already become a good platform to showcase Cuban products, including cigar, rum, medical products, honey, and shrimps.

Given Cuba's edge in medical and pharmaceutical research, the country is also seeking cooperation in related fields.