On how to tell China stories more effectively

Experts gather at Tongji University to share their views on how to create a more effective Chinese narrative in the changing world. The forum coincides with the official launching of the National Language Promotion Base at the university. Wang Hui, an official from the Ministry of Education, expresses his hope that the base could develop smoothly and contribute solidly to the cause of promoting the Chinese language.

A number of experts were in Shanghai to explore some of the challenges of shaping a more authentic and effective Chinese narrative in a changing world, with some envisioning new trends and opportunities looming in the post-pandemic era.

The experts shared their views at a recent forum held at the International School of Tongji University, which also coincided with the launch of a book series featuring the perception of China by international students at the university. The series include, notably, a book entitled "The China Stories Told by International Students."

In his keynote speech, Li Yuming, a professor from Beijing Language and Culture University, set forth the economic attribute of language by suggesting a combination of language instruction with professional needs, citing language data as an essential factor of production in digital economy. As has been observed, digital economy has already emerged as a new economic form in addition to traditional agricultural economy and industrial economy.

Li stressed that this agreement about language data is an innovative attempt at grasping, theoretically, the essence of information society, against the backdrop of rapid development of digital economy, with considerable significance for the promotion of Chinese language teaching and learning overseas.

Economic development as a driver of learning a particular language has not been something new. For instance, it could be observed that the international propagation of the Chinese language has been inextricably linked up with the development of the Chinese economy. Similarly, when Taiwan proceeds with its promotion of Chinese language among overseas Chinese, it is as a rule accompanied by the passing down of skills, in catering, motor repairs and agricultural technology. Similarly, in Japan, language promotion has always been linked up with exports of its products. 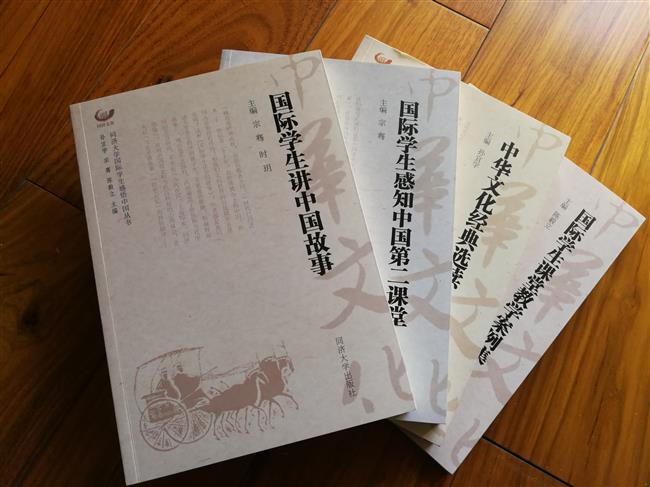 The forum also coincides with the launching of a book series published by Tongji University Press.

All experts suggest the commodization of language dissemination as a trend, hinting at the new perception of language promotion as a measure to raise productivity level along with the introduction of relevant industries, with a view to fostering local economic development. Obviously this goes down particularly well with developing countries which stand to benefit.

In conclusion, Li believes that China is advantageously positioned in this aspect, given its over 3,000 colleges and universities and the many vocational schools, and the host of Chinese enterprises active along the Belt and Road regions.

Chen Shenglai, a senior researcher from Shanghai Academy of Social Sciences, believes that post-pandemic era will afford good opportunities for the dissemination of the Chinese culture.

"The onslaught of the pandemic, by plunging the world into the abyss of bewilderment and dismay, puts everyone on high alert when it comes to interpersonal contact, naturally leading to suspension of all forms of cultural communication," Chen observed, adding that this pandemic had led to major changes in human society whether in systems, ethical considerations, ways of life, manners, or customs.

All these constitute major challenges and crisis to previous international cultural communication based on globalization. With cloud computing-based cultural events leading the way in lifting the cultural barriers imposed by the pandemic prevention measures and new media gaining growing acceptance, Chen predicted that post-pandemic communications will be more "soft," more individualized and more responsive to the needs of the consumers.

In the post-pandemic time, Chen predicted, some cultural communication modes that have proved effective during the pandemic would be here to stay, and China's cultural enterprises must adapt to the changing scenario, by exploiting the country's edge in cyber infrastructure.

Obviously, the book series featuring international students' narrative of their China experience is a case in point.

The book, an anthology of about 150 stories told by students from over 40 countries and regions, is a collection of personal reports of their studies, life and travels in China, free of embellishments, intimate, thus vivid and compelling.

For instance, a Japanese student gives her story of studying, finding a husband, getting married and settling down in Shanghai. A German student tells of her affection for her ayi (domestic helper) in Shanghai, who urged her to get married and have a child, so that the ayi could prove useful again, and why the student thinks differently.

If anything, many of these students have demonstrated their competence at telling a good story, in their own way.

﻿
Special Reports
﻿
Global media duty-bound for a better world
On how to tell China stories more effectively
Is Western media trying to make China sick for the Olympics?
China's "celebrity crackdown": How has Western media covered it?
How Western media can be unfair on China: A direct comparison
A very British Thanksgiving in Shanghai
New Party resolution, by learning from the past, shines the path forward
Explicating the Party's original aspiration
On the historical significance of the new resolution
Seriously, shut up about your first-world issues
EXPLORE SHINE