Playing your part: The collective beauty of team sports

To some, individual accomplishments are the most rewarding. To know that you achieved a goal or completed a task without requiring the assistance of others is, for many, the pinnacle of success. When examining the individualist versus collectivist ideological continuum, opinions and philosophies, of course, lie at different points on the scale.

For others, a team effort may be equally, or even more, satisfying. After all, the collective work of many can complete gargantuan tasks that could never be done by one alone. Pride in these great achievements can be shared by each individual that contributed to their success. We see this pride in the accomplishments of groups; organizations, peoples, nations and of humanity as a whole.

When viewed holistically, both individual talent and effort manifest themselves as a part of teamwork, and, much as it takes a village to raise a child, individual talents are largely fostered within an environment of guidance and instruction. In short, it's us that make the group, and it's the group that makes us as well.

Of course, as it does with so many aspects of our world, sports also exemplify this duality. In individual sports such as golf, swimming, or tennis, it is the solo competitor who receives the glory and accolades, but it's well known that without trainers, coaches and a support system, the athlete would be hard-pressed to break through to any level of success.

On the the other side of that coin is team sports, in which individual efforts are combined to achieve the ultimate goal. Often, the final stage of the process, the finishing act, is most celebrated, but it would never come to be were it not for each link in the sequence of events preceding it. In basketball, for instance, think of a fast-break basket after a quick turnover. Not a hoops aficionado? Don't worry, I'll explain...

A player on the defending team correctly reads the eyes and intent of his opponent who possesses the ball. When the opponent attempts to pass the ball to his teammate across the court, the defender anticipates the play and quickly jumps out to intercept the pass.

Reacting to the sudden change of ball possession, his teammates stop on a dime and rush back in the other direction toward their opponent's goal. One player notices that the team's most talented scorer ― let's call him Jordan ― is being defended tightly as the teams streak back the other way for fear of his dynamic abilities. This teammate of Jordan's deftly steps in the path of that defender, blocking him from continuing to hound Jordan and providing his talented teammate with some space to work.

The ball-handler notices this and immediately zips a pass to Jordan. A second defender, equally fearful of Jordan's scoring talent and not wanting to allow an easy basket, abandons his defensive responsibility to prevent the score. Jordan, seeing this, whips a quick pass around the side of the approaching defender to the man he was previously marking, who drops the ball in off the backboard for two easy points.

Now, who's deserving of praise for this successful play? On the stat sheet, the scorer will be credited with two points for the basket. Jordan will receive an assist, an official statistic, for the play as well for directly passing to the basket-maker. The adroit teammate who stole the ball in the first place will have a steal to his credit marked on the ledger. But what about the man who freed up Jordan with his screen move? He receives no statistical accolade, and the majority of observers in the audience likely wouldn't notice his maneuver at all, especially since it happened away from the ball, where most eyes are constantly fixed.

However, his teammates, coaches and the more adept fans watching the game will certainly appreciate his contribution. Without it, the play as it happened likely wouldn't have occurred at all. In fact, when coaches and team managers are choosing players other than superstars to round out a starting lineup or team roster, it's plays like these that often serve as the deciding factor. 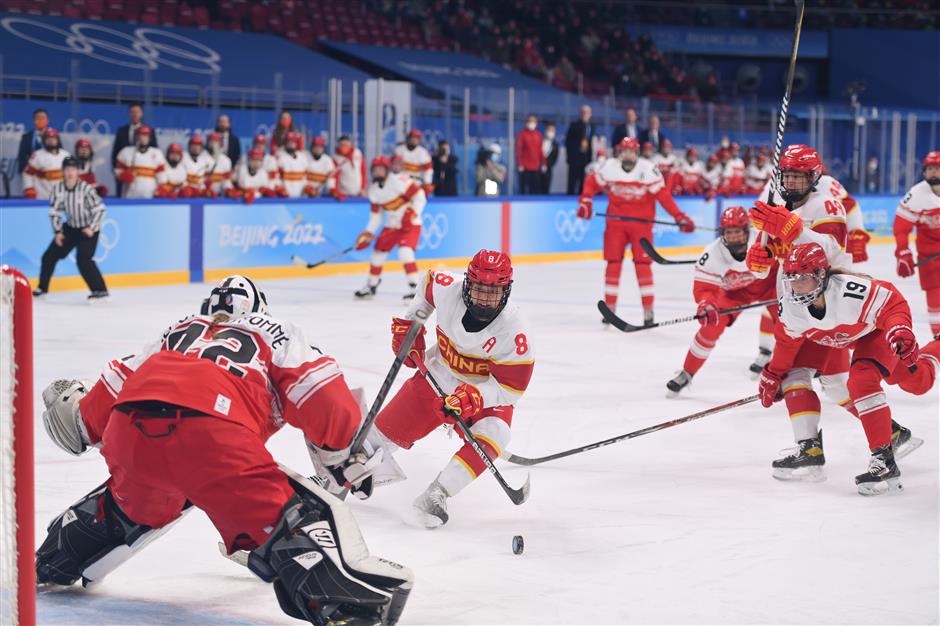 China's Lin Qiqi (8) on her way to scoring a goal during the women's ice hockey group match between China and Denmark on February 4. China won 3:1.

In this year's Winter Olympics, the most analogous team sport to the basketball-related scenario I just described is clearly ice hockey. Though on ice instead of hardwood, skates instead of sneakers, and using sticks and a flat puck instead of a round, bouncing ball, the two sports, in their most basic essence, have much in common. Teams strategically move in formation and use both individual skill and symbiotic movements to evade defenders and put the puck in the net.

Scoring in ice hockey is much less common, however, and the final tallies resemble those of football more than basketball. In fact, hockey has quite a lot in common with football as well, albeit at a greatly heightened pace and with significantly more physical aggression permitted within the rules. Any enthusiast of either basketball or football would likely find a great deal to enjoy about the game of ice hockey.

Another example of a team sport at the Winter Olympics, though starkly different in nature, is bobsled, or bobsleigh. In this event, two to four people cram into a small sleigh and shoot down narrow, icy tunnels at staggering speeds to see who can complete the course in the shortest time.

The crew consists of a pilot, who steers the sleigh in either direction to maximize velocity and maintain an optimal direction, and a brakeman, who is in charge of bringing the sleigh to a stop at the race's conclusion. In four-person races, two pushers are added to the crew, who are in charge of pushing the sleigh to a quick downhill start and using their body weight to assist the pilot in guiding the sleigh's precise direction. Though the pilot generally receives a majority of the praise, without the other crew members, the endeavor would be considerably more difficult.

And what would an article on team sports be without mentioning the venerable shuffleboard-on-ice extravaganza that is curling. You know the sport, where one teammate slowly slides a heavy stone across the ice while teammates use brooms to help steer the stone toward the center of a target. This is also a sport where teamwork is essential to success. But that gem of a game is a topic for another day.

Stay tuned, and remember to be a team player! 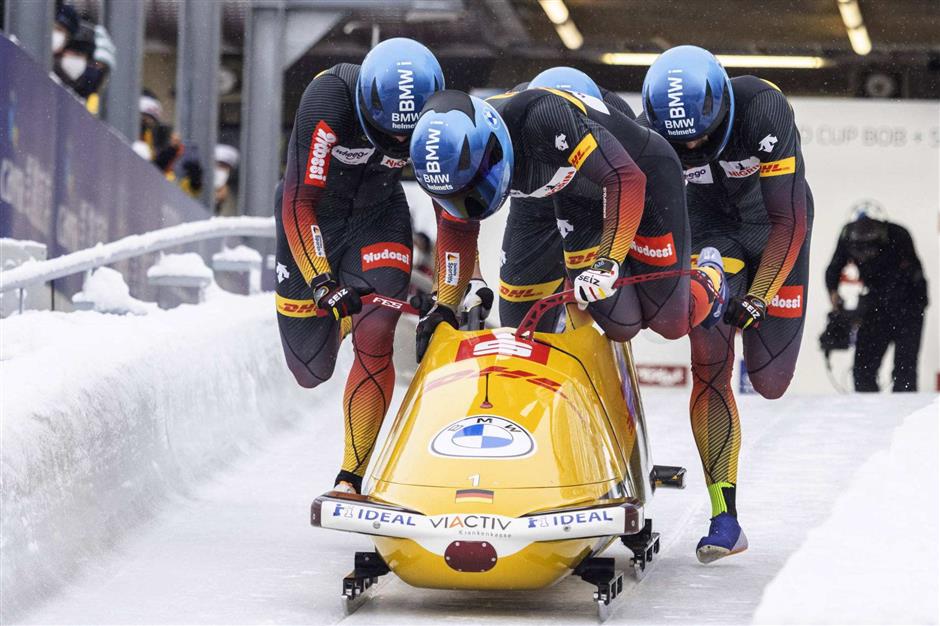 Bobsleigh is a winter sport that highly displays teamwork. 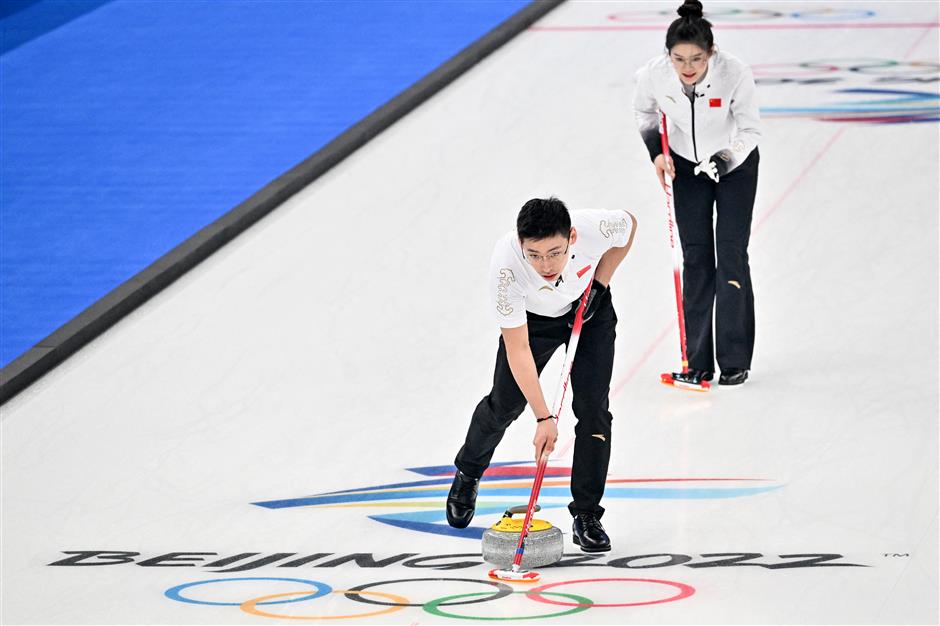 China's Ling Zhi (front) and Fan Suyuan curl the stone during the mixed doubles round robin session 13 game of the Beijing 2022 curling competition between the Czech Republic and China at the National Aquatics Center on February 7. China lost 6:8.