When I was strolling through our neighborhood in suburban Shanghai at dusk last week, a strange creature the size of a kitten caught my eyes. It was attempting to climb up a sidewalk curb, but flopped back halfway each time.

I hurriedly went up to it and lifted it with a fallen twig. I discovered that it was a young hedgehog with a thin layer of quills covering its tender back. It "conquered" the curb with my assistance and nudged its way through a lush lawn toward the bank of a river that circles our residential community.

It was my first encounter with a hedgehog. This enjoyable experience strengthened my positive feelings toward the environment in which I live. 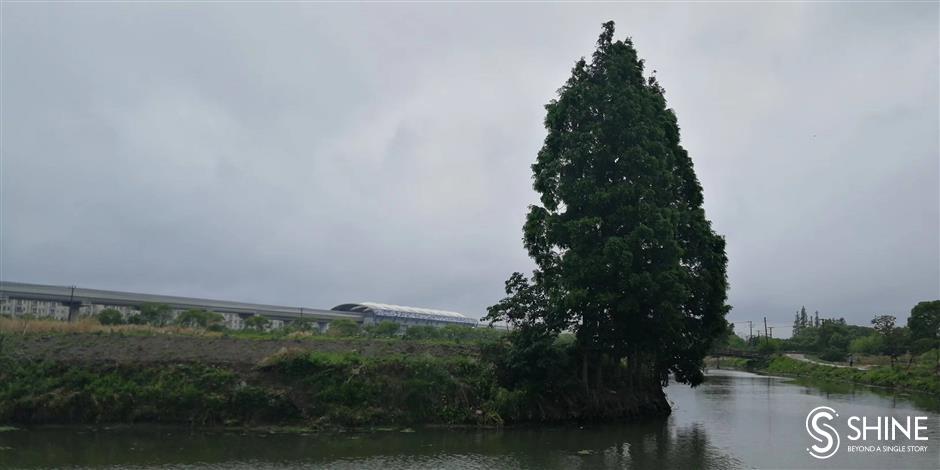 An agricultural landscape near the author's residential community in Qingpu District of west Shanghai.

A closer look at the rural wetland that's conducive to biodiversity.

Our community, like many other newly built suburban communities, is surrounded by wetlands that include forests, lakes, rivers and farmland. The river that circles our neighborhood passes through many idyllic villages and ecological corridors before joining the 62-square-kilometer Dianshan Lake, which sits at the heart of one of Shanghai's most important wetland areas in the upper reaches of the Huangpu River.

The unusual appearance of a hedgehog in a normal residential area like mine could be due to fewer human footprints during the city's lockdown. But, at its core, it's about the city's ever-improving biological diversity, thanks in large part to the constant expansion or restoration of wetlands. According to local wildlife protection authorities, wetlands are now one of the most important sources of biodiversity in Shanghai.

A recent United Nations article commemorating this year's International Day for Biodiversity on May 22 claimed biodiversity "is often understood in terms of the wide variety of plants, animals and microorganisms, but it also includes ... the variety of ecosystems ..." Wetlands are defined by the United Nations as ecosystems in which water is the primary factor controlling the environment and the associated plant and animal life.

Wetlands encompass both freshwater and marine ecosystems, including all lakes and rivers, underground aquifers, swamps and marshes, wet grasslands, as well as all man-made sites such as fishponds, paddy fields, reservoirs and saltpans.

Indeed, the entire Qingpu District in west Shanghai, where I live, "thrives on wetlands," according to a recent report in Xinmin Weekly. According to the United Nations, wetlands are home to 40 percent of all plant and animal species, despite covering only about 6 percent of the Earth's land surface. As a result, wetland biodiversity is important for our health and food supply.

I relocated from downtown Shanghai to Qingpu District in 2012. Many polluting factories, such as plastics-processing plants, have been closed over the last decade. In their place, large wetlands comprised of farmland, forests and water bodies have emerged and expanded, encircling an increasing number of residential neighborhoods and business districts.

A view of the Great Lotus Lake wetland. The photo was taken more than a year ago. 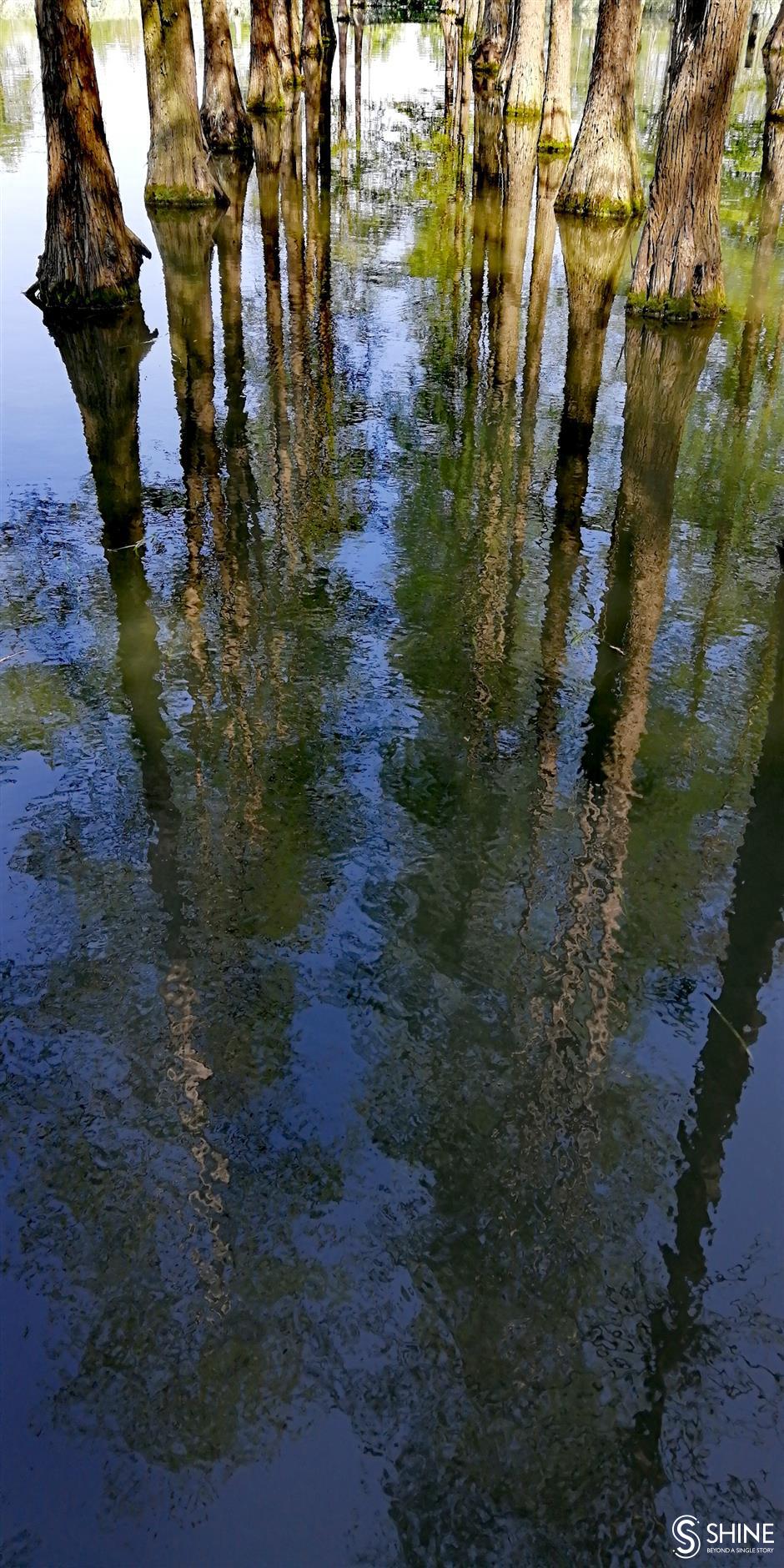 The Great Lotus Lake wetland, about 2 kilometers from Dianshan Lake, is a model project in Qingpu's efforts to restore biodiversity-friendly natural habitats. After years of restoration, it has finally become the home of Shanghai's only wetland-themed country park, which features a unique water-borne fir forest and large organic farms that use frogs as natural pest killers.

Given the momentum in wetland restoration across Qingpu District, some wild animals came into our view prior to the current lockdown – even before the pandemic outbreak at the end of 2019.

Raccoon dogs are not "intruders" into our suburban lives. "They are true 'aboriginal inhabitants' here," Wang Fang, a life science professor at Fudan University, said in a recent interview.

"They're returning because our environment has improved."

According to The Paper, a leading Shanghai-based news outlet, these wild raccoon dogs have mostly been found roaming or inhabiting newly built neighborhoods in outlying Qingpu, Songjiang and Minhang districts, where many residents live close to farmland or undeveloped land.

In many cases, forests and bodies of water connect agricultural landscapes and undeveloped areas. They are part of a larger system of wetlands that gives many wild animals and plants more places to live and more ways to live. 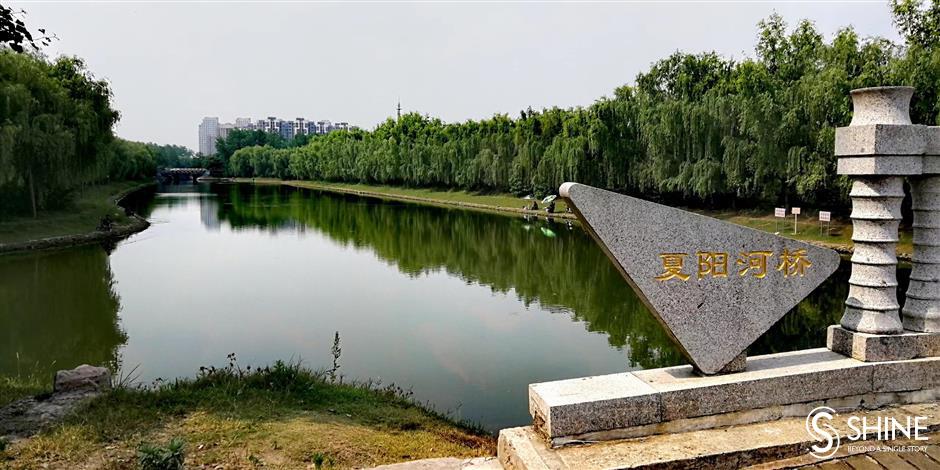 A wetland ecosystem in the heart of Qingpu District 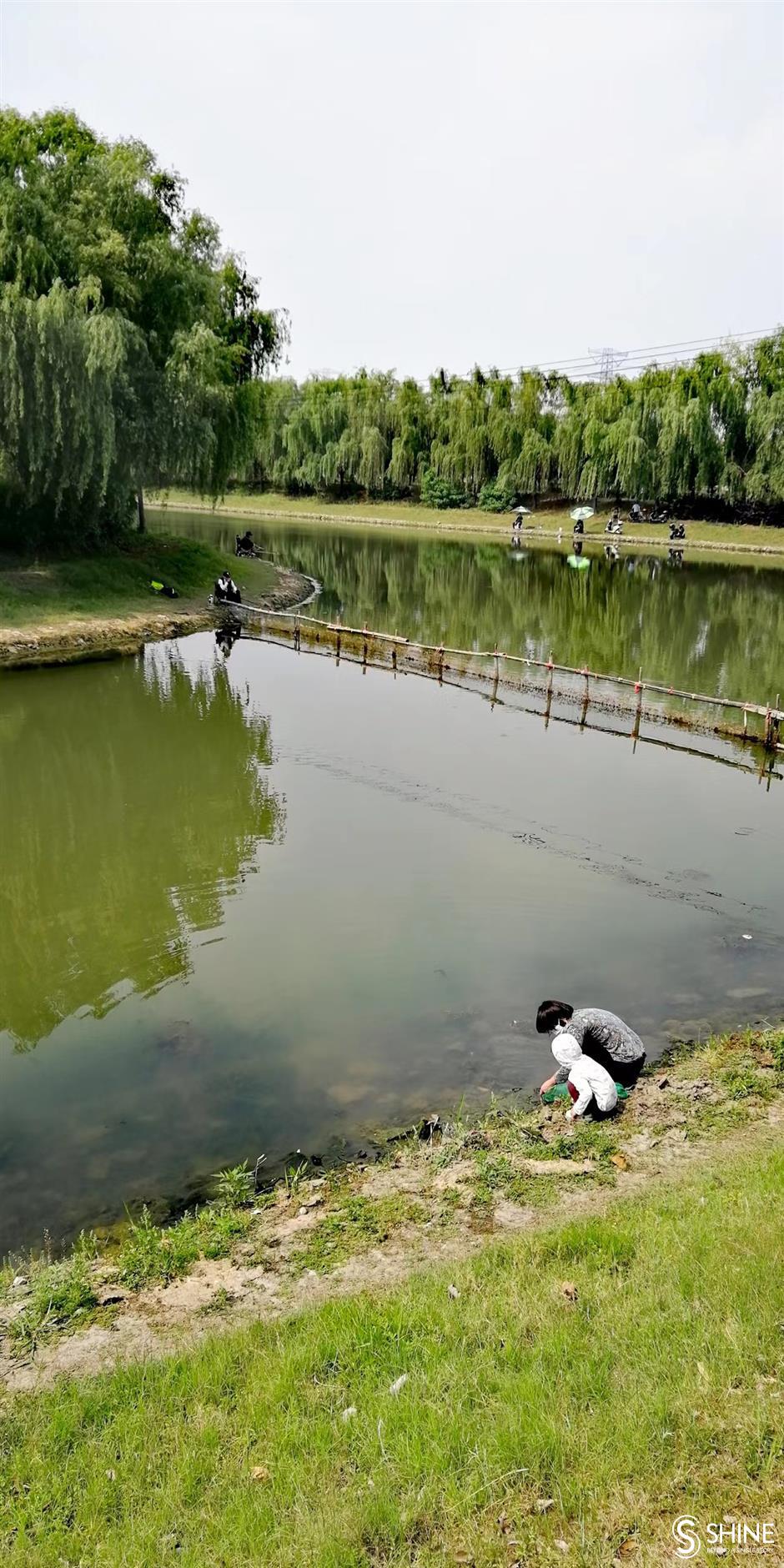 A woman and her granddaughter play with water grass in a wetland area near a residential neighborhood in the central part of Qingpu District.

Chen Xuechu, an ecological and environmental science professor at East China Normal University, is one of the brains behind the coastal wetland park's ecological restoration.

"The park is like nature's theater, allowing nearby residents to appreciate wildlife at a closer distance, while effectively restoring biodiversity along the coastal beach," he said in a documentary released on May 22 to mark the International Day for Biodiversity.

The 230,000-square-meter coastal wetland, which is the size of 33 standard football stadiums, was finished and opened to the public in 2017. Its success in restoring biodiversity extends beyond attracting an increasing number of wild animals. In a recent in-depth report, The Paper cited an article in Nature, the world's leading science magazine, as praising "the manicured wetland that sucks up more carbon than a natural marsh." The Yingwuzhou project is referred to as "the manicured wetland."

The city's current lockdown has prevented me from conducting additional field research in Yingwuzhou or the Great Lotus Lake area, but I was able to visit rice fields surrounded by shallow rivers and shaded by massive trees near my residential community on Wednesday. Squirrels and swallows darting here and there "greeted" me there. Freshly cut rapeseed stalks that had been put in the fields as "green fertilizers" gave off a light, lingering scent. 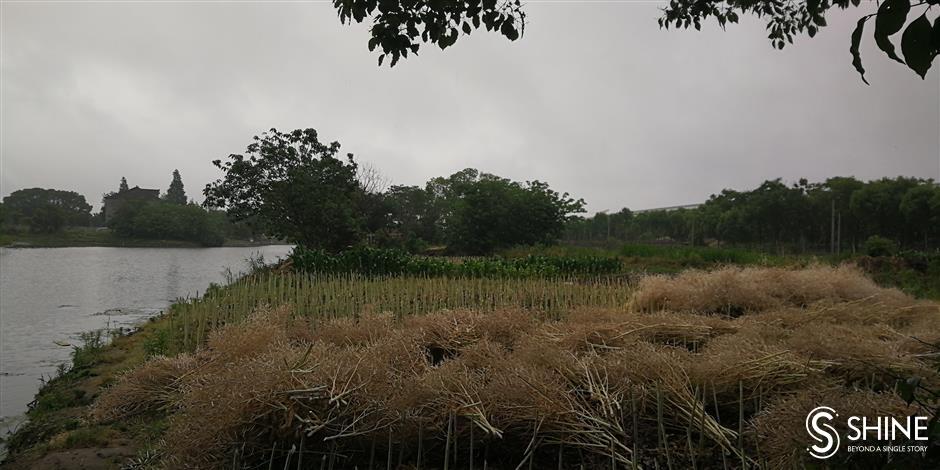 Back in my neighborhood, common blackbirds and Chinese bulbuls have been chirping happily throughout the lockdown, soothing us with nature's sounds. It's wetland diversity at work right outside my door.

Shanghai is rich in wetland resources, according to the National Forestry and Grassland Administration, with nearly 500,000 hectares of wetlands. It intends to increase its forest coverage to 23 percent by 2035, up from around 19 percent currently. The biodiversity of the city will benefit from this effort and the city's ongoing campaign to spruce up agricultural landscapes.

Wetlands, as the United Nations points out, are critical for humans, other ecosystems and our climate. Biodiversity loss could spread zoonoses – diseases transmitted from animals to humans – whereas biodiversity preservation provides excellent tools for combating pandemics such as those caused by coronavirus.

"Let us hope we don't end up in a world where we believe modern mechanics can replace nature's infinitely advanced functions," says Anne Sverdrup-Thygeson, a conservation biology professor at the Norwegian University of Life Sciences and author of "Buzz, Sting, Bite: Why We Need Insects." 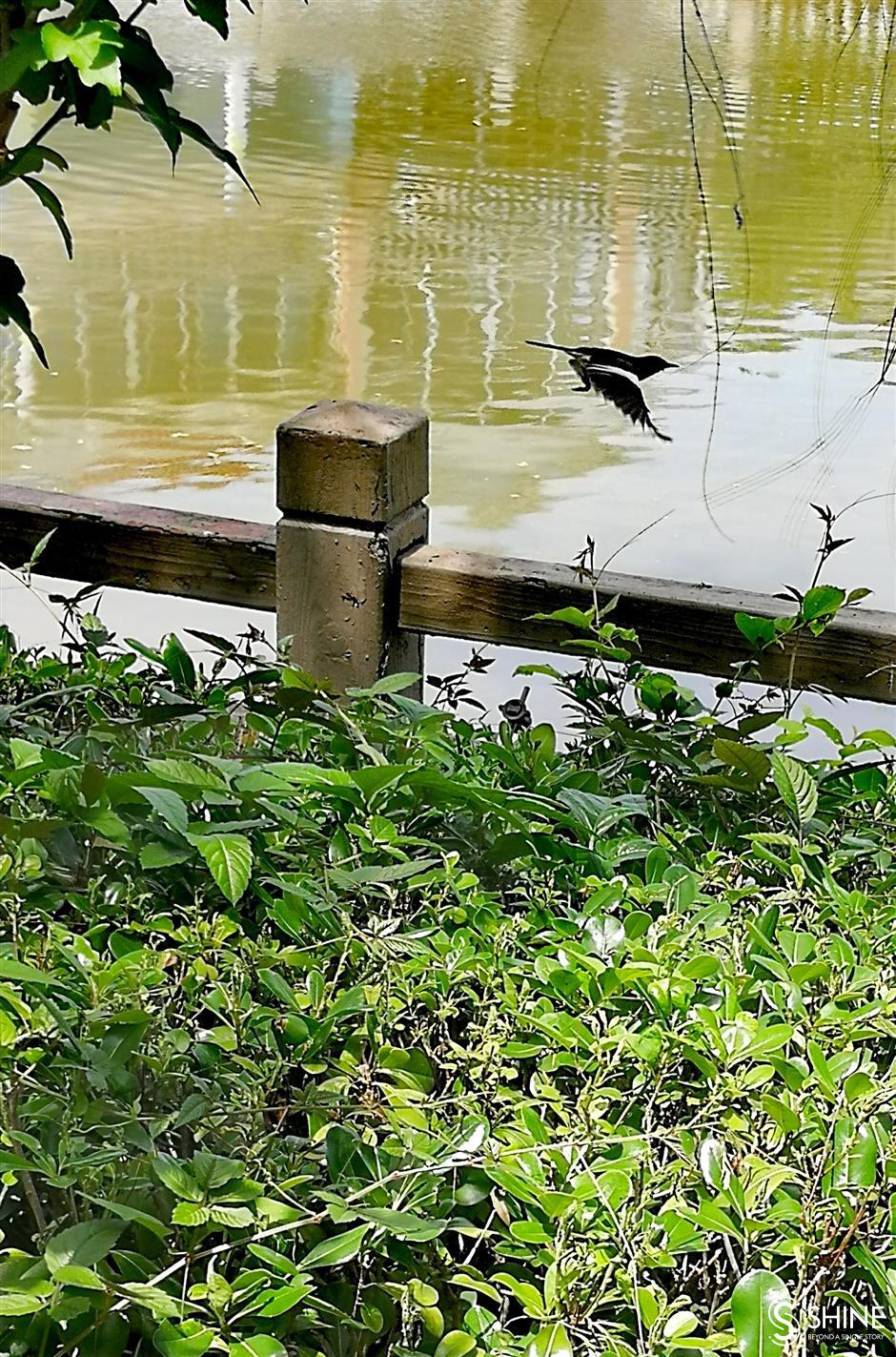 Birds fly over a residential community. 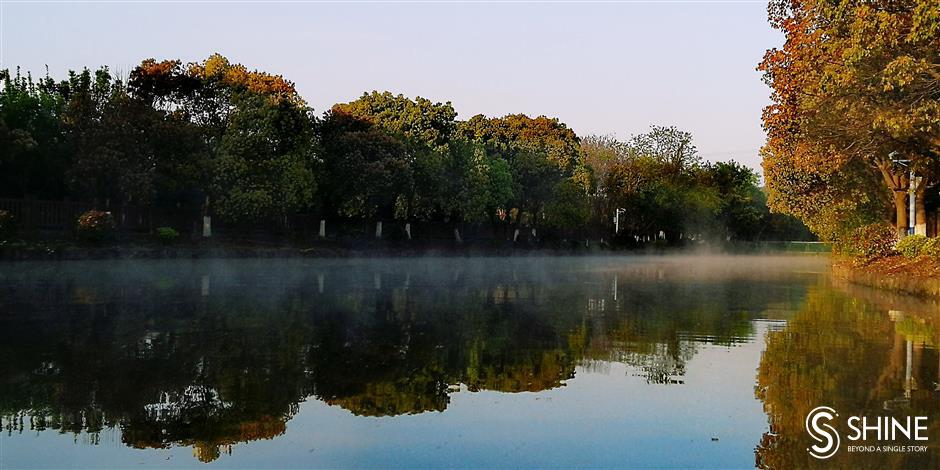 A wetland at Zhongbu Village, one of China's most beautiful villages. It's about five kilometers away from the author's neighborhood. The photo was taken a year ago.