Short videos are becoming an important means of entertainment, but indulging in them can be addictive, leading to significant mental and health impacts. 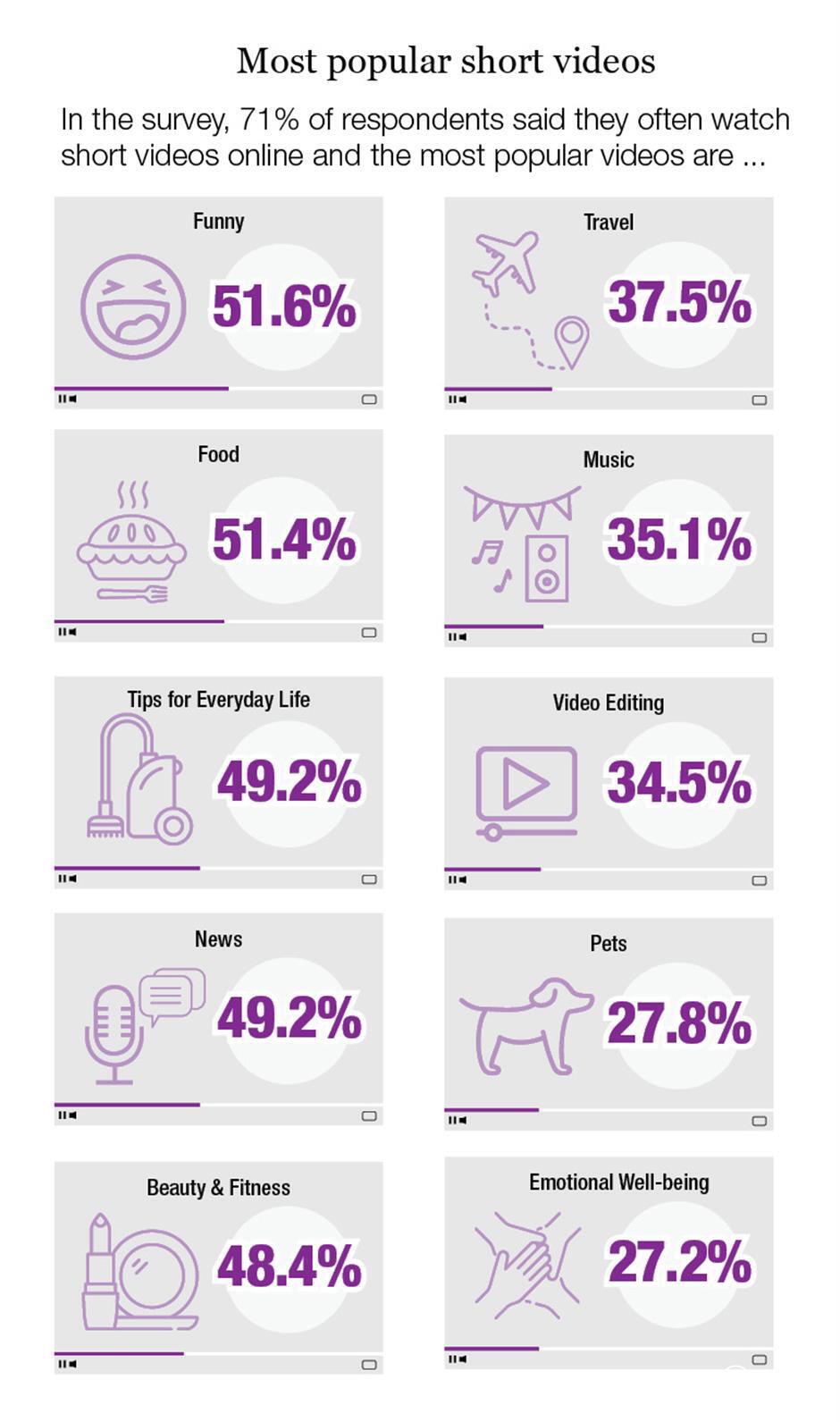 According to a survey conducted by wenjuan.com for the China Youth Daily, 81.0 percent of the 1,538 people polled said they watch videos for relaxation and entertainment; 71.0 percent watched short videos on a regular basis; 61.8 percent believed that long-term viewing of short videos could interfere with their normal social interactions; and 65.2 percent suggested that video platforms step up in issuing regular alerts so that users could take a break.

This appeal for external aids to help kick the addictive habit hints at the crushing hold short videos have on the shiftless multitudes – many of them are not utterly devoid of self-control in other circumstances.

"When I come across videos that make me laugh, I put a 'like,' and then forward the video to my friends," one of those surveyed said.

I made a cursory check of the videos I received so far in the day, and they include, among others, "Remember this if you want to buy good oil and rice," from my elder sister, "A child without a mom is pitiable indeed," from my younger sister, and a piece – forwarded by a friend – featuring a trip to Shanghai and Hangzhou by a German in the 1930s. Each of them was interesting but think twice before clicking on any of them.

For as you click on these seemingly innocuous videos, your life will be thrown into a mindless spiral as we eagerly move from one snippet to the next, each lasting 20 to 30 seconds, and are shocked, amused, and outraged in rapid succession.

You never have a chance to get bored, for you are always curious about what the next piece would be like, craving more and expecting more. All that is needed is a slight twitching of one of your fingers. 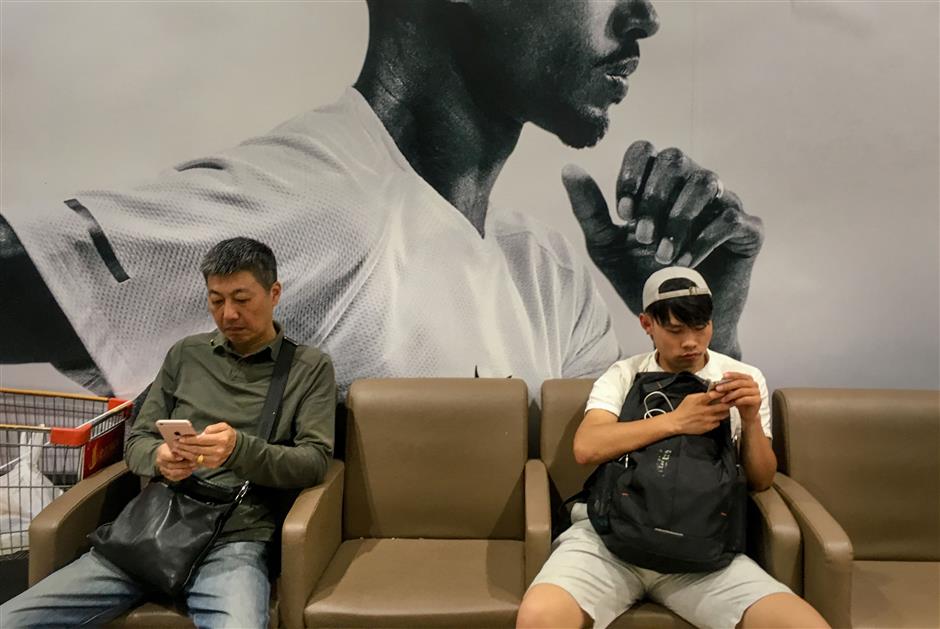 Short videos are becoming more popular. As of June, the size of short-form video service users has reached 962 million, up 28 million from last December.

Respondents do believe some videos could be useful by teaching you how to cook, how to apply make-up, practice wellness, or buy things. There was even an alleged telecom fraudster publicizing his identification and daring the police to catch him in Dubai, according to him.

One of the most sensational items recently was to recite or mock the crudely made poems attributed to Jia Qianqian, daughter of a well-known contemporary novelist, Jia Pingwa.

The daughter and father have been embroiled in a scandal since August 17, when the China Writers Association published a list of candidates for new members, including the young Jia.

Some of Jia's poems, which are frankly scatological and decidedly offensive, have been relentlessly mocked by the public. After the uproar, the association said in a statement on September 2 that it had decided to take Jia off the list after carefully listening to the different opinions of people from all walks of life.

After suffering public lynching for days, on September 4, Jia Qianqian claimed that she was NOT the author of the three outrageous poems singled out for online attacks.

Although Jia would continue to be chastised for a slew of other "poems" she wrote while under the influence of hormones, questions about how a person of such caliber was admitted to an elite university and ultimately became an associate professor remained unanswered. I am equally appalled that – if Jia Qianqian was honest about the authorship of the three poems – these platforms could get away with sponsoring such seditious and calumnious, purely fabricated, content for so long.

It is shocking to realize that a published video per se would have automatically acquired a degree of authenticity and suffice to preclude all incentives and the need for checking, even regarding such basic facts as authorship.

So it is natural that 36.7 percent of the respondents in the wenjuan.com survey cited the issue of false and misleading content in short videos as an issue, and relevant authorities should have stepped in long ago to address it.

Yes, juvenile-only modes have been in place for some time, but it is so easy for children to circumvent this. As a matter of fact, there is an equally compelling need for a mechanism to prevent adults from becoming addicted, notably by limiting the time they are allowed to view the videos. Thus, when 37.0 percent of the respondents said that, as far as viewing habits are concerned, parents should play an exemplary role for the emulation of juveniles, maybe all parents should put their mobile phones aside for a moment of self-reflection.

There is also a psychological explanation for this addiction. The urge to constantly scroll through the short videos could be explained by "intermittent reinforcement," a conditioning schedule in which a reward or punishment (reinforcement) is not administered every time the desired response is performed.

In other words, if you win every time or win the same amount when using a slot machine – this wouldn't be exciting or fun. When the reinforcement is intermittent, it would lead to a positive and euphoric response in the brain, very much like a gambling addiction.

Studies also suggest that the videos can vitiate your self-control so that your fingers keep twitching not because of a lack of self-control but because the algorithms of the platforms have, imperceptibly, mastered the art of frustrating any of your attempts at regaining self-control.

﻿
Special Reports
﻿
Finding short videos irresistible? Well, so is gambling…
Did the regulatory authorities go overboard in slapping Paris Baguette with a 'hefty' fine?
The 'offal' truth about exotic dishes: They bring people from different cultures together
Turning 60 but still working? The challenges of calling China's retirees back to work
The record-smashing heatwave is mercifully over
Chinese spikers in masks kick up a storm
The in-between cuisine: Western-style Chinese food
Don't bother. These wild guesses about foreign brands are simply rumors
Climate change heat is on, time to act now
What's in a name? It's just a matter of personal choice
EXPLORE SHINE