In this series on cross-cultural comparisons, we try to look at some Chinese manners, customs and concepts from a historical and cultural perspective, as distinct from their Western counterparts, with a view to arriving at an reappraisal of the Chinese outlook in the modern context. 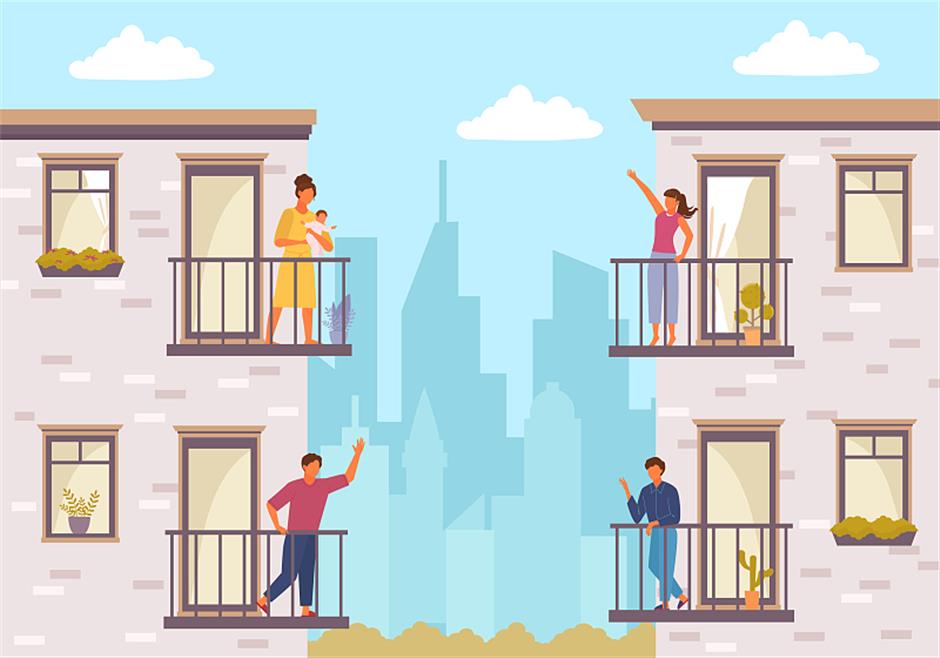 Confucius was once critical of a celebrity in the Analects. "Who says of Weisheng that he is upstanding? One begged some vinegar of him, and he begged it of a neighbor and passed it on."

The correct approach, as Confucius implies, is to say no.

Now, this Weisheng was a man of his word. He was having a tryst with his girlfriend at a rendezvous under a bridge. The girl failed to turn up on time, and he refused to leave the place, in spite of the rising tide, and was later found drowned, his arms still holding fast to a column. This gave rise to the idiom baozhuxin, or "column clasping faith."

But that Weisheng could borrow vinegar from his neighbor does imply something about traditional social fabric -- Neighbors could drop in, borrow things, exchange gossip, hence the traditional wisdom that neighbors are dearer than distant relatives.

Decades of radical urban relocations – and dislocations – have led to a new living paradigm centered on privacy and, in this process, we seem to be shifting from a dynamic neighborhood to a more insulating notion where a neighborhood means little more than physical adjacency.

While the development was at first perceived as progressive, more and more residents are looking back nostalgically, particularly during the months-long lockdown, when neighborly solicitude went a long way towards tiding over the difficult times.

In some communities, different stakeholders are coming together, collaborating on issues of communal concerns, with a view to building a spirited neighborhood where residents interact spontaneously.

In this aspect, some grassroots neighborhood offices (sub-districts) are playing an exemplary role in creating incentives to spark communal connection. 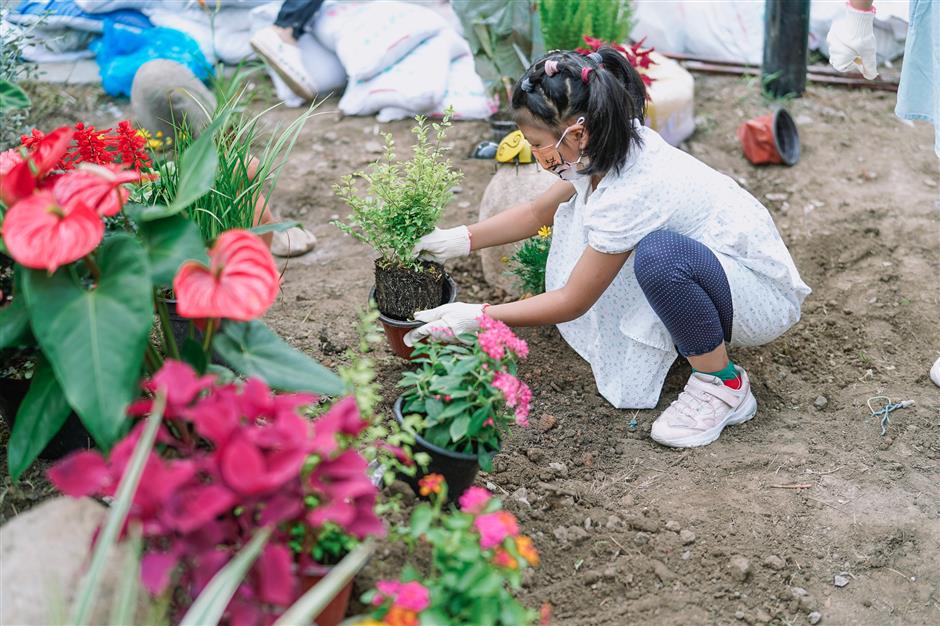 Children help to build a community garden in Sanlin, Pudong.

A case in point is the Dongming Road Neighborhood in Sanlin, Pudong, an extensive community relocated from downtown Puxi in the mid-1990s, during the first wave of the "great development" of Shanghai.

Typifying the dislocations that have taken place during the city's rapid transformation, the extensive community was chosen as a pilot area where all stakeholders joined hands to turn isolated, atomized households into an organic whole.

Liu Jing talked about the Dongming Experiment in a recent interview at the neighborhood Party-People Service Center.

Liu is director of Clover Nature School, a social organization dedicated to building gardens in underutilized community spaces set up by professor Liu Yuelai from Tongji University. Liu Jing was from Hubei Province, and after graduating from Fudan University, she joined in the community work two years ago after a two-year stint with Alibaba. She is also founder of MCamp, an educational facility for children.

"We came to Dongming Road communities at the beginning of this year and began to handle major projects in March. We have already latched onto every department under the neighborhood office, having won numerous awards for our projects, and are enjoying rave reviews for the ongoing Dongming Road Community Garden Fair," Liu said. The fair, held from November 1 to December 1, includes parent-children activities, art displays and performances, narrative programs on communal history, and flea markets -- activities designed to rekindle residents' interest in their own neighborhoods.

"The Clover from Tongji provides us with some theoretical guidance in general terms, which are not difficult to put into practice. The most difficult part is building mutual trust between people, particularly on how to entice them out of their dens and join in the activities," Liu said.

It can be tough for these activities that entail donation of time and some physical exertion.

And the key to overcoming the residents' inertia is the exemplary role played by Liu's team as organizers.

"Our strength lies in our readiness to participate, especially at the beginning, and once it gets going, we will switch to a hands-off approach," said Liu.

In completing a project, Liu's team need to demonstrate versatility in bridging different demands with the providers.

The needs can be diverse: Some communities want to have the walls painted, others might prefer potted gardens or wood work. Liu has in mind partners adept at these tasks. "We will be responsible for the full spectrum; the screening, decision-making, and we will answer for all eventualities," Liu said.

A community fair in Sanlin, Pudong

To maximize residential engagement, they prefer not to contract professional building teams, which can be expensive. These jobs will mostly devolve on the residents.

"Even somewhat technical operations like mixing concrete or paving roads could be competently undertaken by some residents," Liu said, adding that some temporary workers in the neighborhood might also be hired for more technical work, with the additional benefit of generating some income for the locals. She explained that the concept about temporary workers plus material procurement is a concept in gardening originated from Japan.

But Liu consistently played down the physical aspect of the endeavor, reiterating the central importance of residential participation, whether in designing a corner garden, in renovating a public space within a building, or in garbage sorting -- these joint effort provides busywork for residents, and the degree of their engagement would be the sole yardstick for judging the success of a project.

The interview was at this juncture joined by Zhu Yueyue, the appointed interviewee, who had been called out to another community where she had to take measurements of a parking lot for non-motor vehicles slated to be converted into a comfy civilian space where residents could sit down for a cup of tea and chat. Also a Fudan graduate, Zhu, a "new Shanghainese" like Liu, was a resident of Sanlin Yuan in the Dongming Road neighborhood.

Zhu is also chairman of the Jumingxin, a newly minted social organization spun off from the Clover project that will take roots in the 38 communities in the Dongming Road Neighborhood. "It will operate independently, not necessarily be beholden to me," Liu said.

Zhu said that while Sanlin is a more well-known place name, Dongming is fairly little-known, "sandwiched in the Sanlin Township like a yolk." When residents were scheduled to relocate to Sanlin Township decades ago, given their metropolitan origins, many expressed their distaste for the rustic associations of the area being known as a zhen, or "township." The Dongming Road Neighborhood was created and accepted, for jiedao (neighborhood) sounds distinctly urban.

A girl displays some of her dolls in a community flea market in Sanlin, Pudong.

But Dongming languished relatively unknown, with nearly all landmarks and metro stations named after Sanlin. In spite of this, Dongming's recent success in pandemic containment during the COVID-19 resurgence early this year earned it a glowing mention by the municipal Party secretary at an important conference.

Although Zhu was effusive about the fair she helped organize, her narrative of it has a personal touch.

When she took her family around the flea market at the weekend fair, her son's eyes were glued to a pair of leather shoes which were larger than his size. The little boy keeping the stall kept asking them to buy the shoes, and after the fourth time, Liu succumbed, paying 35 yuan (US$4.9) for the shoes, as well as a stool and some other items, to the glee of both kids. I got a glimpse of Liu's family of three later in an online competition for the "Most Beautiful Household" sponsored by the Pudong Women's Federation.

"Such an activity, an attempt at recreating the former neighborhood ambience, seeks to reconnect residents through exchange of daily goods. It might also lead to reflections on the consumerist society where people buy everything, with some brands particularly prized," Zhu said. The fair gives used items a new lease on life.

There are payoffs in other aspects.

In nuclear families, the care of children can be a full time engagement, but in a familiar neighborhood, Zhu said, the children can be taken care of by neighbors with their own children.

During the rehearsal of the performance for the fair, Zhu noticed that a girl had been watching the performance with great concentration. After negotiating with the child director, an extra role was created especially for the little girl, and she acquitted herself with great success.

Although the fair got rave reviews from all parties, Zhu confessed hosting an event like this could be a fraught experience.

If too few turn up, it would be embarrassing for visiting dignitaries.

If too many show, there would be challenges in maintaining control.

Occasionally some residents complained that such activities should not take place in the time of the pandemic, though most were jubilant, saying that this is something unseen for the past two years.

They are fortunate in enjoying staunch support from neighborhood officials.

When their experience is summarized theoretically by their Tongji partner, such practice promises to be emulated in the rest of the city or country, contributing further to building neighborhood vibrancy by leveraging all stakeholders.

﻿
Special Reports
﻿
Building communities where neighbors care, share, and fare well
'Painful menstruation leave' provokes more controversy than praise
The Hamburg port deal: a model to reconnect China and Europe
What do you weigh? How (and why) I lost a stone in Huangshan
The beautiful game on its biggest stage: Watching the World Cup in Shanghai
Chinese views on more births changing as world population hits 8b
Why European leaders should visit China?
Not a travel diary: Shanghai's mangled columnist goes home
Hothouse tutorials by any other name smell equally obnoxious
Quarantine: the chance of a lifetime to be with yourself
EXPLORE SHINE