Cold War's complicated legacy and lessons we forget at our peril

The Cold war — a period that is usually dated from 1946 (or 1947) until the dissolution of the Soviet Union in 1991 — continues to influence us today.

Indeed, with renewed tensions between Russia and the West, it is clear that many of the most pernicious characteristics of that time — rising military spending and stereotyping the behavior, or doubting the motives, of “the other side” — are still with us.

As one born in 1943, I remember many things about that time vividly: How in grade school we were instructed that, in the case of a warning siren or sudden flash of light, we were to kneel next to our desks and cover our heads; riding in the family car in the early 1950s and peering closely at a small house we were passing, hoping to get a glimpse of the mysterious person — a “communist” — that my father said lived there; and fearing, one beautiful autumn afternoon in the midst of the Cuban missile crisis of 1962, that we were on the brink of a nuclear war. 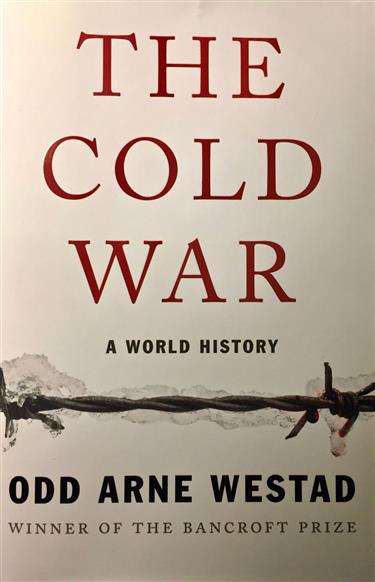 Living is not understanding

“The Cold War” by Odd Arne Westad reminds me that living through the Cold War, however, is not the same as understanding it.

Although I remember most of the key events and national leaders, my knowledge of the forces involved, as well as how they were interrelated, was influenced — and limited — by the emotions and passions of the time.

Westad’s lengthy book (630 pages), representing a staggering amount of research, is dazzling in its breadth of comprehension and clarity of narrative.

He reminds us that even though the Cold War is remembered not only as a period of great tension but also as having successfully avoided conflict between the Soviet Union and West, there were a number of costly conflicts during these years between smaller states, often complicated when one or more of the rival powers decided to support a particular side.

Westad says the seeds of the Cold War were planted much earlier, in the latter part of the 19th century and the early years of the 20th century, when Western nations competed for colonies in India, Africa, and Asia.

An arms race between the then-great powers of Germany, Great Britain, France and Russia eventually led to the ghastly human and economic losses of World War I, further contributing to the genesis of the Cold War by unleashing destabilizing forces that battered Europe, such as the collapse of the old Austria-Hungarian, Ottoman, and Russian empires, the birth of Soviet Russia, simmering resentment in Germany over its defeat that contributed to the eventual rise of Hitler and imperial Japan’s hunger for territorial and economic gains in both China and the western Pacific.

Europe’s struggle to achieve post-war stabilization was undermined by the Great Depression.

Less than 20 years after the ending of the first, an even more devastating world war created the immediate conditions from which the Cold War began.

Over the next several decades, as tensions between East and West grew, former colonial states won their independence, rarely peacefully.

Jealous of their newly won independence, they were wary of the embrace of either rival bloc. For a few years, spurred on by newly independent India’s Prime Minister Nehru and Indonesian president Sukarno, they sought to become a neutral grouping of non-aligned states. Economic and political realities, however, soon forced most, especially the smaller states, into the shadow of one camp or the other.

Among the thoughts triggered by Westad’s, some of the most provocative involve how the Cold War might very well have turned out very differently if only:

• US president FDR had lived into the post-war era so that he could have continued to develop his relationship with the Soviet Union in implementing their wartime agreements;

• US president John Kennedy had not been murdered and, instead, continued to build upon the effort begun with Soviet leaders towards limiting the nuclear arms race and beginning disarmament, the subsequent relationship between the US and Russia might have evolved into a workable partnership.

Throughout this remarkable book, the reader “hovers” in time, watching as key decisions are made and marveling at how many of them were based upon misinformation or misunderstandings.

The tit-for-tat response and counter-response of each side to the other’s moves (or what were thought to be their intentions) for the next several decades only served to reinforce — and, in a real sense, create — the belief that this was an all or nothing struggle for survival.

Nonetheless, for all of the missteps and misjudgments — and there were many — major disasters were somehow avoided. This is all the more amazing because the Soviet Union and the US all had significant internal destabilization at some point during these long years.

With the disintegration of the Soviet Union, some in the West foolishly proclaimed “victory” while others believed that now the world could embark on a truly peaceful future.

However, since the fundamental causes of the Cold War — indeed, of all of the conflicts of the bloody 20th century — remain little understood or unresolved, it is hardly surprising that we find ourselves in the second decade of the 21st century once again in a time of rising inter-state tensions aggravated by extreme nationalists.

Instead of building bridges, or reinforcing those that exist, far too many seem determined to blow them up once again. Despite the beliefs of some, history does not “repeat itself.” What do re-occur are stubborn patterns of human behavior that, sadly, repeatedly lead to tragic outcomes.

Not only, for example, do today’s nationalist populists, constantly sowing suspicions about multi-state cooperation, use the alleged threat posed by immigrants to boost their own control, but they also refuse to recognize how those waves of refugees are largely the result of climate change — heat waves, droughts, and crop failures — and ongoing wars and civil unrest that can only be successfully resolved through international teamwork.

Where among us are those with eyes to see and courage to lead?