That we could have an illustrated edition of the life of Confucius and his Analects is not so remarkable as it first seemed.

As Michael Puett observes in his forward to “The Analects,” as adapted and illustrated by Chih-chung Tsai, no one would think of illustrating Kant’s second critique. The discrepancy lies in the fact that the Chinese notion of philosophy is not the same as it is conceptualized in the West.

In “The Analects,” basic Confucian principles are elucidated through a series of dialogues between the sage and his disciples. Confucian doctrines lend itself to a cartoon rendition because it has never been esoteric theory that is the preserve of scholastic deliberation. It is more a compendium of musings, events and conducts that relate to daily life, with the purpose of achieving social order and harmony.

As a matter of fact, much of Confucian philosophy is set out in how the mentor comports himself in a living situation concerning studying, governance, filial piety, or even cooking. These mundane situations have been skillfully and successfully exploited by Tsai in his graphic creation of Chinese classics.

When Tsai’s “Chuangtzu” came out in 1986, it topped the sales record chart for ten months. This marked the beginning of Tsai’s engagement with Chinese classics.

In 1994, seven pages of Tsai’s “Chuangtzu” was included in a textbook for senior high school students in Japan. When Tsai’s illustrated library of Chinese classics came out three decades ago in the Chinese mainland, it took mainlanders by surprise.

Significantly, in September 2013, when cartoon editions of textbooks on traditional Chinese culture for students in the Chinese mainland were compiled, about 260 stories had been based on Tsai’s cartoons.

Today 10 million copies of Tsai’s cartoon works (numbering 100 titles) in various languages have been sold in over 30 countries and regions.

Puett even argues that “When we read Chih-chung Tsai’s text, we avoid the risk that so many modern readers of the text fall into — the danger of simply looking for a statement here or there that sounds philosophically profound, pulling it out of the context in which it appears, and ignoring the way the situation is portrayed.”

Of course there is yet another dimension we cannot afford to ignore. Our distance from Confucius’ times dictates that textual ambiguities are often unavoidable, and that much of Confucian scholarship in the past ages has been committed to syntactic disambiguation, contextual explication, or assessment of textual differences with different editions. 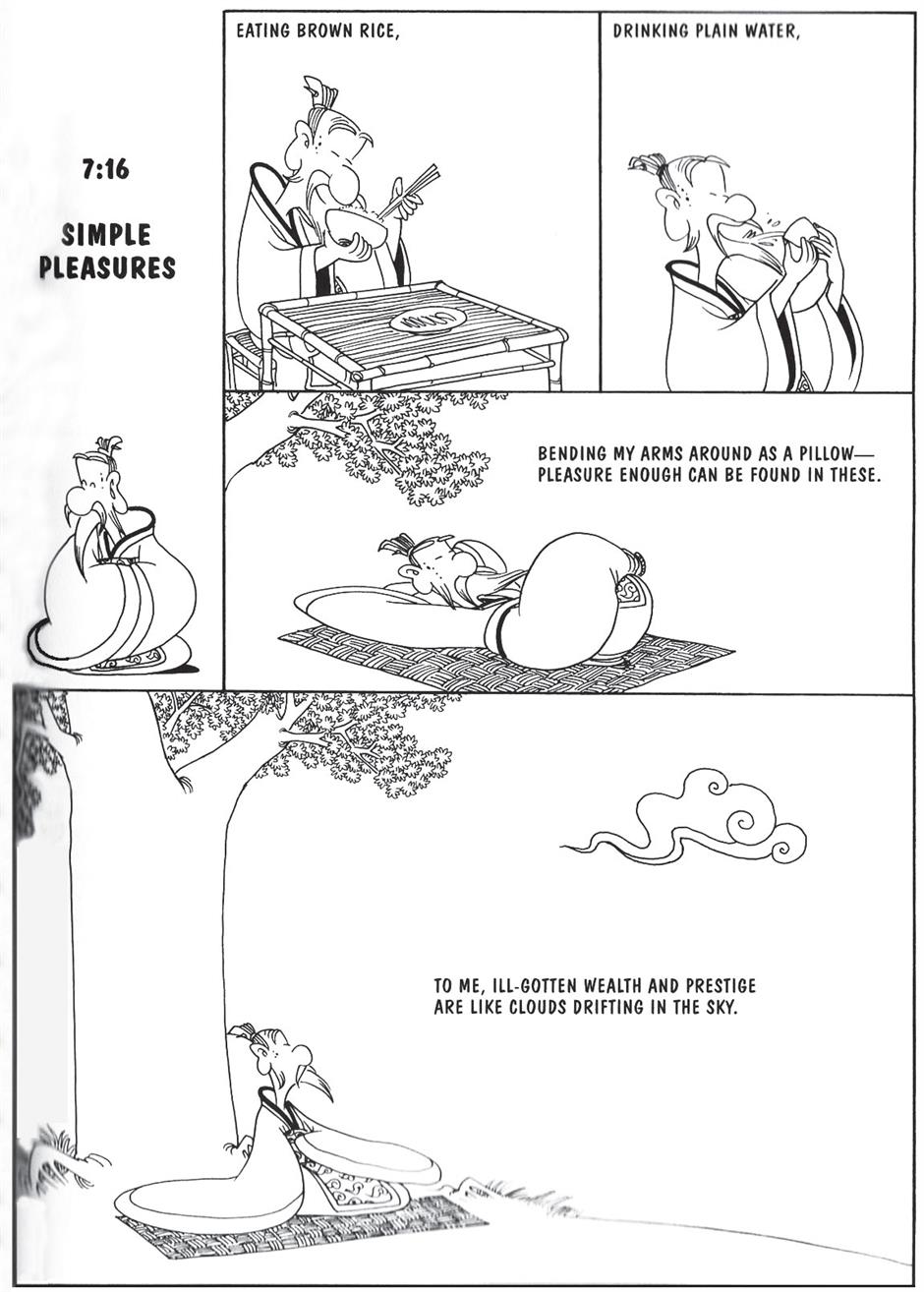 The buildup of commentaries of Confucian texts over the past two millennia means that this scholarship is already part and parcel of Confucianism, rather than something external.

The mention of Confucius in modern Chinese would often conjure up the image of a pedagogue, or a pedantic reciter of platitudes that fails to keep up with the times. The cartoon adaptation, however, also plays up the playful aspect of Confucius, as evinced in many of the delightful situations delineated in the cartoons.

The vigor and vivacity of Confucianism can be better understood in a historical context. Confucius lived during 551-479BC, towards the end of the Spring and Autumn Period (770-476BC), which was followed by the Warring States Period (475-221BC) (the two periods made up the Eastern Zhou Dynasty which, with Western Zhou, made up the Zhou Dynasty).

Some people tend to have a forward looking attitude, which enables them to envision an ideal age in a future time. Some tend to look back. If Edward Gibbon measured the decline of Roman Empire against the first years of the empire, then this great Chinese sage tried to restore Chinese to its height of order and stability during the Western Zhou Dynasty. He could have made it earlier, but for the want of reliable historical documents.

That Dynasty was ruled by a Tianzi (Son of Heaven), with many fiefs having local control but showing their loyalty to the Tianzi by visiting the Son of Heaven regularly or sending tribute to him.

Then the center could no longer hold. As disputes arose, conflicts erupted frequently. With the states gradually swallowing up one another for more than five centuries, the about 140 states at the beginning of the Spring and Autumn Period were reduced to seven major powers towards the end of the period. This ceaseless strife for supremacy fostered an intellectual ferment later known as baijia zhengming, or “the contending of a hundred schools of thought.”

Confucius moaned this increasingly eroded solidarity, and deemed his chosen mission to restore the Dynasty to its former glory.

Commenting on the poems he included in “The Book of Songs,” he observed that all the poems show “purity of thought.”

Mencius observed that “Confucius completed the Spring and Autumn Annals and the history struck terror into the hearts of rebellious subjects and undutiful sons.”

At the beginning Confucianism was just one of many schools of thoughts that emerged during that period. It was the Legalism as proposed by Han Feizi that enabled Qin to tip the balance and achieve national unification. After the short-lived Qin Dynasty (221-206BC) was taken over by the Han Dynasty (206BC-220AD), at the suggestion of a Confucian scholar Dong Zhongshu, Emperor Wu (156-87BC) proscribed all non-Confucian schools of thoughts and espoused Confucianism as the orthodox state ideology. The recipe Confucius prescribed for a harmonious society is simple: Let the five constant virtues of benevolence, righteousness, propriety, wisdom and fidelity inform all social relations.

As these are a distinct Chinese concept, they are not easy to be put into English. For instance, the central concept of li, depending on the context, can be translated as ceremony, propriety, ritual, proper behavior or sacrifice (etymologically, though, the character suggests sacrificial utensils containing plenty of offerings).

Confucius’ pet term of Junzi refers to someone so fully developed in his character and virtue that we should all look up to him as a model and guide. When this is translated as “gentleman” so much is lost that it could simply refer to someone kindly enough to hold doors open for others.

As most of these elaborate rituals are no longer practiced in our daily life, it would be interesting to see how Tsai represented them in his cartoon version. When I saw zuoyi (making bows with hands folded in front) practiced in a real life situation in an old footage from early last century, the force of its impact I sustained was probably not inferior to those Westerners who found the scene deserving of documentation.

I was similarly moved a few years ago in Japan when I saw how corporate leaders there ritually practiced kowtow on tatami in great solemnity prior to a dinner.

The relevance of Confucius today could never be understated. Although “The Analects” is a book of only 12,700 characters, I doubt how many Chinese have read all of it, and how many of those who have read it regard it as more than a collection of clichéd precepts and aphorisms.

Given the considerable language barriers, compared to text-only editions, the illustrated version will hopefully bring Chinese readers more readily into the world of the sage.

Meanwhile, this light-hearted treatment of the legacy of the Chinese culture would also bring Westerners into contact with some of the fundamental concepts of Chinese attitudes and outlooks.

The book actually consists of three parts: Confucius’ biography complete with the full biographical text in Chinese, followed by selections from “The Analects,” and ending with introduction to some of Confucius’ disciples.