SIPG blanks Chongqing to extend lead in Group B 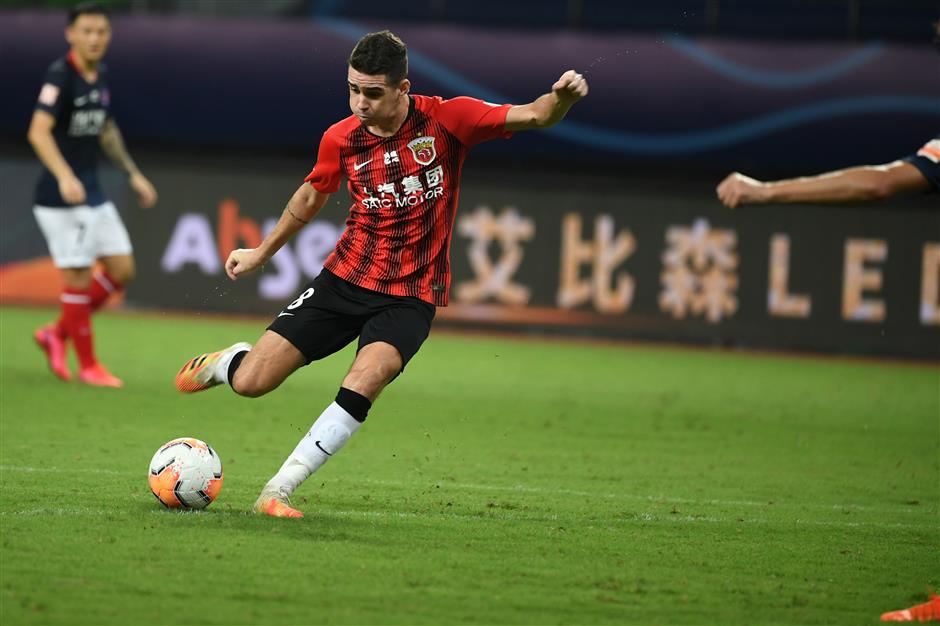 Shanghai SIPG playmaker Oscar scores the third goal against Chongqing Lifan during their Chinese Super League match in Suzhou, Jiangsu Province, on Wednesday. SIPG won 3-0 to extend its lead atop Group B in the CSL's Suzhou bubble.

Wang Shenchao claimed a goal and an assist as Shanghai SIPG easily beat Chongqing Lifan 3-0 in Suzhou in the seventh round of the Chinese Super League on Wednesday.

Shanghai took the lead in the 17th minute when Fu Huan's cross from the right was driven home by Austrian forward Marko Arnautovic.

A mistake from Liu Le allowed SIPG to double its lead just two minutes later, after the Chongqing defender mistakenly passed the ball to Wang instead of his teammate Sui Weijie, gifting Wang an easy tap-in.

Wang made another contribution in the 65th minute by rolling the ball back to playmaker Oscar, who smashed home from outside the box to make it 3-0.

"I am very satisfied with the whole team today. We scored three goals, but our opponents did not have any good opportunity," said Shanghai head coach Vitor Pereira.

SIPG now has 17 points to extend its lead atop the eight-team Group B by four points from Beijing Guoan. Wuhan Zall is third on 12 points after rallying past Tianjin Teda 2-1 in the late match in Suzhou. Tianjin is rooted to the bottom with just one point to its name.

In Dalian, northeastern Liaoning Province, Shanghai Greenland Shenhua and Henan Jianye played out a 0-0 stalemate in the rain earlier on Wednesday.

Originally scheduled for August 24, the game had been postponed due to heavy rain, though the hybrid grass pitch was in good enough condition to see the game played today.

Cao Yunding almost gave Shenhua the lead in the 8th minute following a foul on Moreno, but his free-kick cannoned off the post.

At the other end, Dourado had a chance on the half-hour mark, but his volley flew wide after he slipped on the wet grass.

The second half was a turgid affair until the 79th, when Moreno capitalized on a mistake from Jianye defender Guo Jing to roll the ball past the onrushing goalkeeper, but his effort struck the post.

Shenhua is fourth in the other eight-team Group A on 11 points, with defending champion Guangzhou Evergrande top on 16 points, followed by Shandong Luneng (16) and Jiangsu Suning (11). Henan lies seventh with 6 points.