Resumption of CSL season postponed, probably until the end of July

The resumption of Chinese Super League had been postponed, probably until the end of July, because the national team players who got China through to the third round of Asian qualifying for the 2022 World Cup are in quarantine.

The Chinese top flight was scheduled to resume after a one-month break on Monday with eight-time champion Guangzhou FC taking on Chongqing Athletic and Qingdao FC to face Henan Longmen but the matches were called off.

"We will also seek the clubs' opinions and eventually come up with a generally acceptable plan for the Super League."

China successfully qualified for the final phase of Asia's qualifying tournament for Qatar 2022 last week in games staged in the United Arab Emirates, leaving the national team squad in quarantine in Suzhou, neighboring Jiangsu Province, and unable to play for 21 days.

Chen said the CSL was the foundation of Chinese football and the CFA had no choice but to suspend it while national team players were unavailable.

A source familiar with the matter said CFA officials were meeting to discuss the restructuring of the season.

The opening five rounds of the CSL were held in April and May in bio-secure venues in Suzhou and Guangzhou, southern Guangdong Province, with the 16 teams split into two groups.

The source said one of the plans the CFA was considering was a return to the traditional home-and-away format for the rest of the season with a limited number of fans allowed in stadiums. The World Cup qualifiers will resume in September with the draw for the third round matches taking place on July 1.

Another source said China's success in reaching the third round meant the original structure of the season was no longer viable.

"The new plan is not out yet, but it's assumed that the matches will resume at the end of July," the source said. 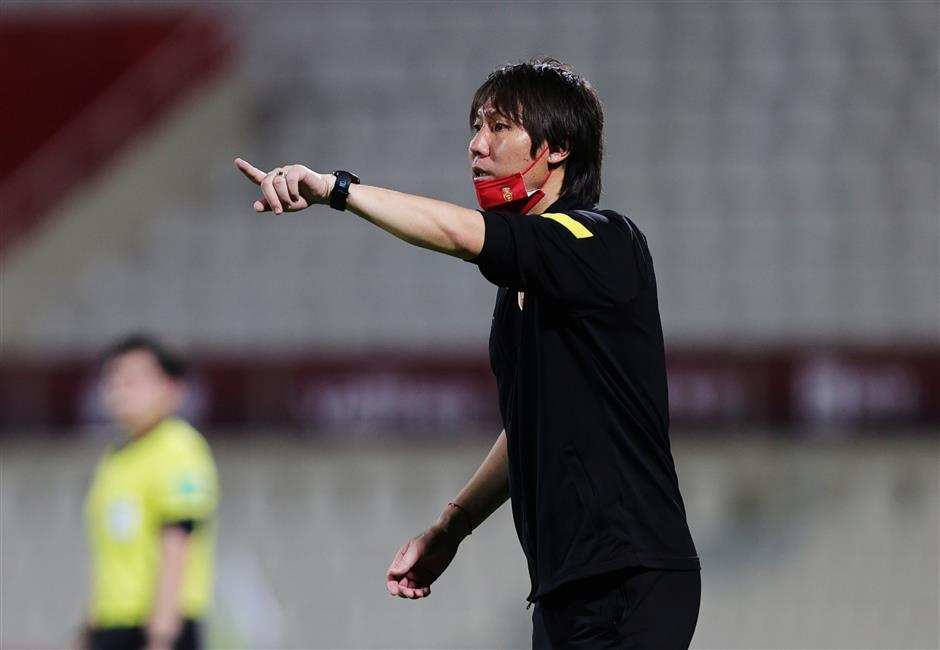 The former Everton midfielder, who took over as head coach following Marcello Lippi's resignation, led the Chinese to four straight wins this month to secure a berth in the next round of qualifying for Qatar.

"We won't change the coach for just losing a game or two.

"Li is now focusing on the team's preparations for the final round of the World Cup Asian qualifiers."

China will join 11 other Asian nations in the draw on July 1 for the final phase of the continent's preliminaries, when four guaranteed places in Qatar will be at stake. A potential fifth berth is available through a series of playoffs.

Li initially signed a contract until June 2020 after taking charge of the team following Lippi's resignation in November 2019 in the wake of a damaging 1-2 loss to Syria during World Cup qualifiers.

The COVID-19 pandemic put a halt to the qualifying schedule for almost 18 months, but upon its resumption the Chinese showed a marked improvement with Li leading the team to wins over Guam, the Maldives, the Philippines and Syria.

Those victories sealed second place in their qualifying group behind the Syrians and meant the Chinese advanced as one of the best runners-up to the next round.

Progress to the final round keeps China's hopes alive of qualifying for the World Cup for the first time since 2002, when the country made its debut appearance in the competition.