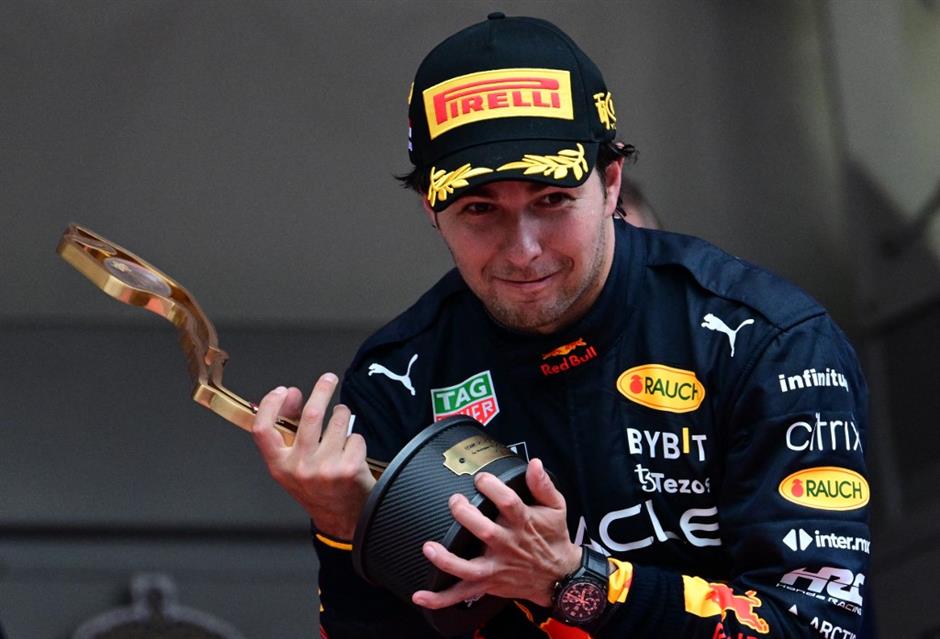 Red Bull Racing's Mexican driver Sergio Perez celebrates with his trophy on the podium after the Monaco Formula 1 Grand Prix at the Monaco street circuit in Monaco, on May 29, 2022.

Sergio Perez took his first win of the 2022 F1 season in a dramatic Monaco Grand Prix on Sunday, as Red Bull outwitted Ferrari in changeable conditions.

A heavy rain shower just before the race was due to begin delayed the start by one hour, and when the Grand Prix did finally get underway, all the cars were obliged to be fitted with full Wet tyres.

Starting from pole position, Ferrari's Charles Leclerc led away from teammate Carlos Sainz, with the Red Bulls of Perez and Max Verstappen third and fourth.

Perez was the first to pit as the track began to dry, coming in for Intermediate tyres on lap 16.

Leclerc and Verstappen pitted two laps later, but Perez's pace on Inters saw him vault the Ferrari into second place.

Sainz was now leading and elected not to pit for Inters, wanting instead to try his luck on slick tyres.

On lap 21, Ferrari called both Sainz and Leclerc in for a double pitstop to change to slicks, but Leclerc crucially lost vital seconds queuing up behind his teammate, meaning the Monegasque fell behind Verstappen into fourth place after the Dutchman stopped one lap later.

With Perez now leading from Sainz, Verstappen and Leclerc, the race was suspended on lap 30 after Mick Schumacher crashed heavily at the Swimming Pool, leaving debris strewn across the circuit.

Once the race resumed, it became clear that the two-hour time limit would be reached before the scheduled 78 laps, and though Perez withstood heavy pressure from Sainz, the tight confines of the Monaco circuit meant there was no way through, and Perez held his nerve to score his third career win and his first of 2022.

"It is a dream come true," said Perez afterwards.

"As a driver, you dream of winning here. After your home race, there is no other more special weekend to win so to do it and the way we did it."

"We made it a bit harder for ourselves at the end today and we had to not make any mistakes and keep it home and keeping Carlos behind wasn't easy."

"It is a massive day for myself and for my country. I am just very, very happy."

Behind the top two, Verstappen filled the final podium place, and seemed content to have extended his championship lead over Leclerc on a weekend where the Dutchman had not looked especially strong.

Having fallen from first to fourth after some questionable strategy calls from Ferrari, Leclerc looked crestfallen after the race, and the Monegasque's dreadful luck at his home race continues.

George Russell took fifth in his Mercedes, with McLaren's Lando Norris finishing a fine sixth and taking home the bonus point for fastest lap after recovering from illness earlier in the week.

Some good defensive driving saw Fernando Alonso take seventh in his Alpine, ahead of Lewis Hamilton in the second Mercedes.

Alfa Romeo's Valtteri Bottas and the Aston Martin of Sebastian Vettel rounded out the top ten, after Alonso's teammate Esteban Ocon received a five-second penalty for earlier contact with Hamilton.

In the Drivers' Championship, Verstappen extends his lead to 125, ahead of Leclerc on 116 and Perez on 110 points.

In the Constructors' Championship, Red Bull's lead now stands at 235, with Ferrari on 199 and Mercedes on 134.

The eighth round of the 2022 F1 World Championship is the Azerbaijan Grand Prix in Baku on June 10.