Zhu Lin defeats world No. 6 Sakkari for 4th round of Australian Open 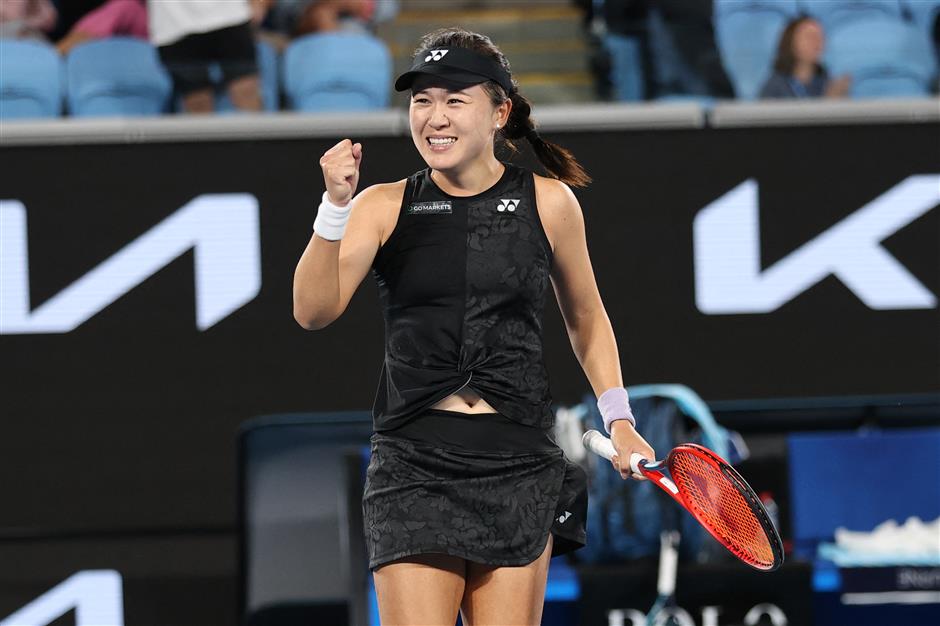 China's Zhu Lin celebrates after victory against Greece's Maria Sakkari during their women's singles match on day five of the Australian Open tennis tournament in Melbourne on January 21, 2023.

Chinese women's singles player and world No. 87 Zhu Lin upset world No. 6 Maria Sakkari of Greece 7-6 (3), 1-6, 6-4 in a three-set thriller, flying into the fourth round of the Australian Open.

"Am I in a dream?" Zhu said on the center court of the Margaret Court Arena.

The 28-year-old winner couldn't hold back her tears after her hard-fought win.

Zhu later told reporters that it was a tough match, not only physically but also mentally.

"She (Sakkari) is a real fighter. She never gives up and has reason to be a top 10. But today, I just keep pushing, being aggressive, playing my tennis and believing in myself. I'm so happy I did it," Zhu said.

As the final match on day five of the Australian Open, the showdown between Zhu and Sakkari took two hours and 33 minutes, concluding at about 1:45 am local time on Saturday.

Both players traded their serve before Zhu first held her serving game and went up 3-1. The first set was dragged into a tiebreaker, where Zhu won three points in a row and emerged victorious at 7-3.

Despite losing the second set at 6-1, Zhu broke Sakkari as soon as the decider unveiled its curtain and later survived her own serve, with her winning margin extended to a 2-0.

Though Sakkari edged past Zhu 4-3 during the set, Zhu outperformed her opponent by shooting high-quality winners and limiting errors. The last game of the match saw Zhu only concede one point to her opponent and lock up her triumph with a final ace.

Less than 24 hours after securing her spot in the third round of women's singles on Wednesday afternoon, the 33-year-old Zhang Shuai, who sits as world No. 26 in the doubles, returned to the outside court for her opening round of women's doubles.

Zhang and her Brazilian partner Beatriz Haddad Maia dropped the first set after being edged past 7-5 by their Canadian-American rivals Leylah Fernandez and Bethanie Mattek-Sands in a tiebreaker.

Facing a 0-4 disadvantage, the seventh-seeded Chinese-Brazilian duo hit a comeback by reeling off six straight game and taking the second set at 6-4. Zhang and Maia broke for a 2-1 lead in the decider and sealed their final victory at 6-7 (5), 6-4, 6-3.

Zhang and Maia fired 30 winners throughout the match, while their opponents landed 23.

In the mixed doubles, the Chinese wildcard pair of Han Xinyun and Zhang Zhizhen registered a 6-2, 6-0 loss to Brazilian duo Luisa Stefan and Rafael Matos in 50 minutes.

Stefan and Matos dominated the match by breaking their opponents five times and winning 92 percent of their first serve.

China's Yang Zhaoxuan and her Polish partner Jan Zielinski failed to survive a first-round encounter with the tournament's eighth seed Gabriela Dabrowski of Canada and Max Purcell of Australia, who breezed to a 6-2, 7-5 victory in one hour and eight minutes.