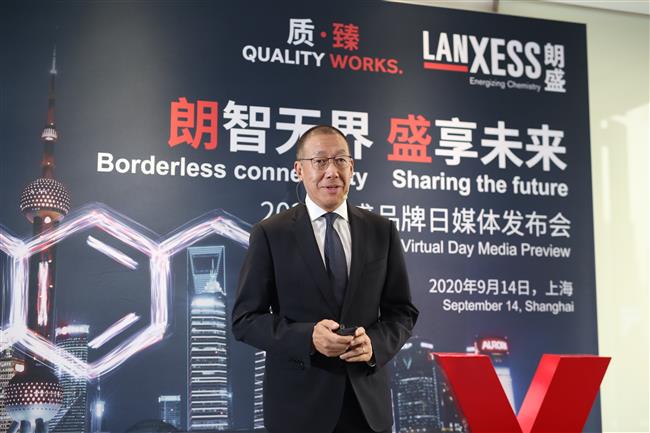 Lanxess AG has stood the test of the COVID-19 pandemic, thanks to its increasingly enriched business portfolio and greater global presence outside of Europe.

While many companies are struggling to overcome the virus, Lanxess has confidently released its financial target for this year despite facing many uncertainties. When many companies are cutting spending, Lanxess continues investing in China and its Asia application center broke ground in July as scheduled.

These achievements are thanks to Lanxess’ long-term strategy to broaden its presence and optimize its business, according to Ming Cheng Chien, president of Asia-Pacific Region at Lanxess.

“Since its beginning, Lanxess has never stopped optimizing its business. About ten years ago, Lanxess was the world’s largest rubber producer, which has one obvious weakness, that is: its near-total dependency on the automotive industry,” Chien said. “So four or five years ago, we started to change that. At that time, the rubber unit was a big chunk of Lanxess’  business portfolio, about 40 percent,” Chien said.

In 2018, Lanxess completely sold its rubber business to Saudi Aramco, the Saudi Arabian multinational petroleum and natural gas company based in Dhahran, Saudi Arabia, for 2.6 billion euros (US$3 billion).

“Timing is good. When the pandemic hit us and the automotive industry was heavily affected, we were not so significantly affected, thanks to Lanxess’ wider portfolio of products,” Chien said.

Lanxess’ other long-term strategy of increasing global presence also worked to help it overcome the pandemic. As a German specialty chemicals company headquartered in Cologne, Germany, Lanxess has been doing a lot of business in Europe.

For now, Europe is still the biggest sales market for Lanxess, accounting for almost half of its total revenue, while the Asia Pacific makes up less than one fourth. Lanxess’ target is to balance its global presence, namely obtaining roughly similar revenues from Europe, the Americas and the Asia Pacific.

The company is continuously increasing its presence in China since its spin-off from Bayer AG, and it paid off, according to Chien.

“If we did not have our business in China, we would see a much worse situation,” he said. “And especially from this experience amid the pandemic and the complex geopolitics, we really need to increase domestic supply chain, and a global presence is very important.”

In July, the company’s application center was built for making products for the Asia Pacific, especially for China.

“Lanxess has already realized we can not produce standard products for all regions. Very often, we have to make products for certain markets. China’s demands are different from others and China would require products for

“Disinfectant and products about food safety are all our strategy here as we see high demand of these products in China,” Chien added.

“We will also look into long-term applications, such as e-mobility and batteries. So we would use the application center to produce products which are most suitable for China. I am very confident our investment would pay off in the long term,” Chien said.