Since the Shanghai government introduced its "100 Measures" program on July 10 aimed at expanding, opening up and developing key industries, the focus has been on just how to implement these policies.

The 100 Measures cover five key areas as part of the city's economic opening up to build Shanghai into an international financial center.

They focus on easing access to the banking and financial sector, relaxing foreign ownership rules and giving securities companies more scope for business.

The measures relate to a number of different industries, so today we focus on two companies — Caterpillar Inc and Zhenhua Port Machinery Co Ltd, as well as the Lingang area as a whole. 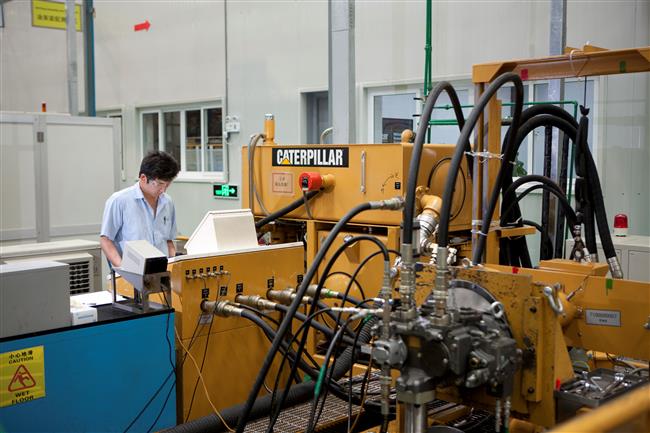 A worker in action at the Caterpillar Shanghai factory.

Caterpillar and ZPMC’s hopes and worries

As a representative of the green manufacturing industry, Caterpillar welcomes the introduction of the 100 Measures.

"The measures will help to create a better import environment for the manufacturing industry," said Song Feng, manager of Caterpillar Shanghai.

He cited Measure 47, which encourages the construction of a national demonstration zone for imported high-end equipment, improving managemient and developing a "circular economy".

The measures will promote cooperation and communication and, in the end, bring benefit to high-end manufacturing.

ZPMC said Chinese enterprises need to strengthen their communication and cooperation with foreign companies in high-end shipbuilding and upstream segments.

The expansion of opening-up is not just a one-way street — as a well-known enterprise internationally, ZPMC should “walk out” into the world.

In fields such as ship building, ship maintenance, automated terminals and shipping, ZPMC has a lot of experience to offer.

ZPMC cautioned that enterprises should avoid blind development of luxury cruise ships in spite of the government’s support as they are totally different from merchant ships.

Caterpillar Shanghai proposed that the re-manufacturing sector needs redefining. Rules on recycling and managing used materials need revision and importing and redistribution should also be revised.

Lingang area and the 100 measures

Since its inception in 2003, the Lingang area, covering 68 square kilometers of reclaimed land at the entrance to Hangzhou Bay, has made great progress.

Initially planned as an advanced manufacturing industry base, Lingang has has shaped itself into a modern, multi-functional and ecologically advanced urban town.

When the Shanghai government introduced its 100 Measures to expand opening-up, Lingang administrative committee recognized the changing landscape and re-calibrated its development aims and strategies.

Lingang is poised to be a key player in the Shanghai's plan to become an international innovative center for science and technology, which requires a transformation of its development ideas and strategies.

Based on the city government's 100 Measures, Lingang has drawn up its own sector-specific strategies.

It will endeavor to develop high-end manufacturing with the help of new emerging industries such as artificial intelligence, big data and unmanned systems.

It will focus on investing in and signing up significant projects. It will form a holistic and multi-level support system, assembling the force of the government,industry and society to help the development of enterprises, according to the administrative committee of Lingang.