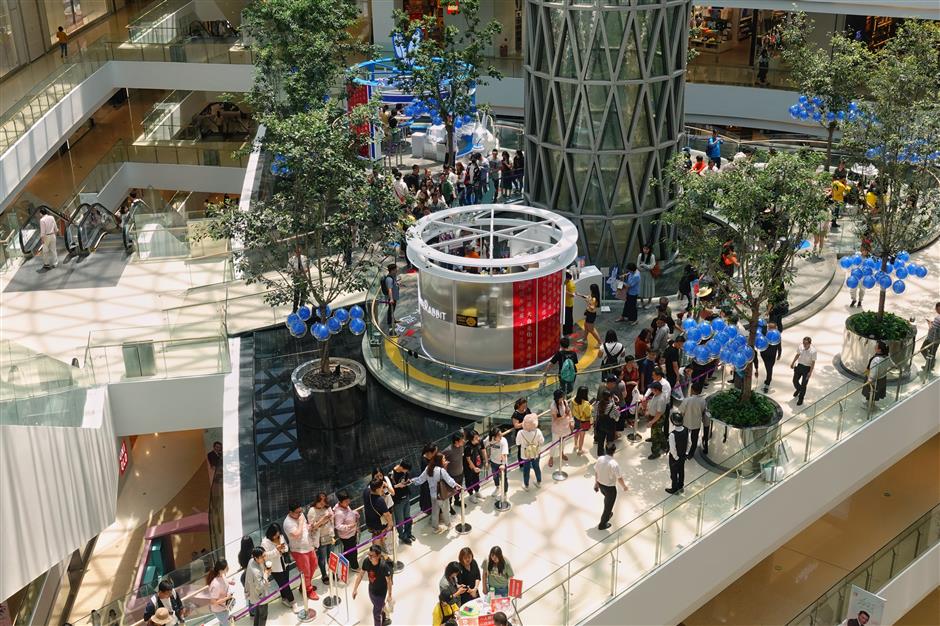 In the LuOne shopping mall in Huangpu District, one pop-up milk tea shop is drawing in huge volumes of customers by relying on nostalgia for an old brand of candy.

The Happy Lemon shop has partnered with the Shanghai-based White Rabbit candy company, a confectionary icon that has delighted generations of Chinese with its original vanilla nougat-like candy.

Through August 18, Happy Lemon is offering a White Rabbit candy version of its milk tea to coincide with the company’s 60th anniversary this year.

A large cup of the tea, with no add-ins, costs 19 yuan (US$2.75), six yuan more than Happy Lemon’s large regular milk tea. Since the drink was released last month, long lines have appeared, with customers queuing up for hours, even on workdays.

“First, you wait in line to grab a wristband, then you come back at the corresponding time,” said one older man in line, who is a self-proclaimed fan of White Rabbit candy. “In total, I’ve waited for four hours. After getting the wristband, I walked around the mall for three hours and bought a coffee (before coming back).”

The irony of buying a drink while waiting to buy another drink was not lost on him, nor was he alone. A handful of other customers in line were sipping cups of tea purchased from other chains. At the time, more than 200 people queued up to purchase the White Rabbit drink. 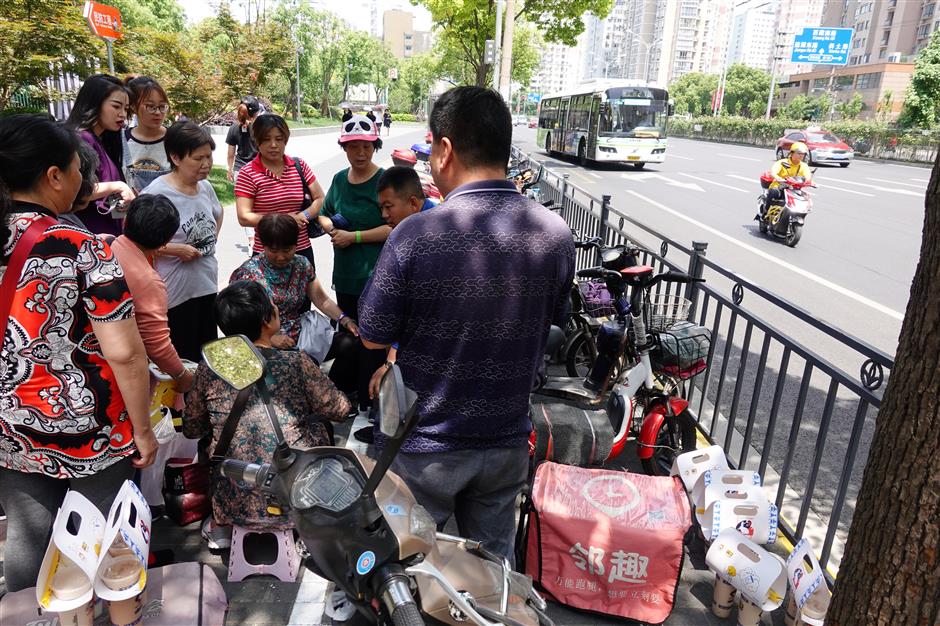 Apparent scalpers pour over their haul outside the LuOne shopping mall.

Many people in line said they expected to wait four to five hours for their drinks. When asked how long they would be willing to wait, most drew the line at about eight hours. One group of middle-aged women in line discussed a plan to sell their drinks outside. Quite possibly, they were huangniu, or “yellow cattle” — a colloquial term used to describe scalpers.

“I think up to one-third of these people (in line) could be huangniu,” one person told Shanghai Daily.

Shanghai’s affinity for the White Rabbit brand is proving to be a massive public relations success for both the company and the milk tea operator.

Curiously enough, Happy Lemon was not required to apply for a food vendor’s license to sell the drinks at this location. In a statement to media outlets, Zhu Liang, deputy director of the Shanghai Huangpu District Administration for Market Regulation, quoted Article 40 of the Shanghai Food Safety Regulation.

“The organizer of an exhibition has the right to sell food products related to the exhibition,” he said. “But we previously put on record the relevant qualifications and certificates of the food being sold.”

In addition to passing an inspection seven days in advance of the “exhibition,” staff must clean kitchen equipment every four hours to adhere to code.

For anyone who wants to buy into the hype without waiting for hours in line, there is a White Rabbit gift shop conveniently located a stone’s throw from the Happy Lemon cashier. There, brand fanatics can buy candy, pins and stuffed white rabbits.

Outside the shop, one woman was holding a White Rabbit logo tote and watching the long line of people. When asked where she purchased her bag, she replied, “Sold out. Come back tomorrow.” Apparently, she works for White Rabbit.

To the side, two women working for a Chinese travel company recorded a short product review video — sipping their drinks and leaving red lipstick smears on their straws. After the camera was turned off, one said, “I used to put six or eight (White Rabbit candies) in my milk tea. This drink tastes like there are maybe one or two pieces.”

“Have you ever had Coco’s milk tea? It tastes a lot like Coco,” she said.