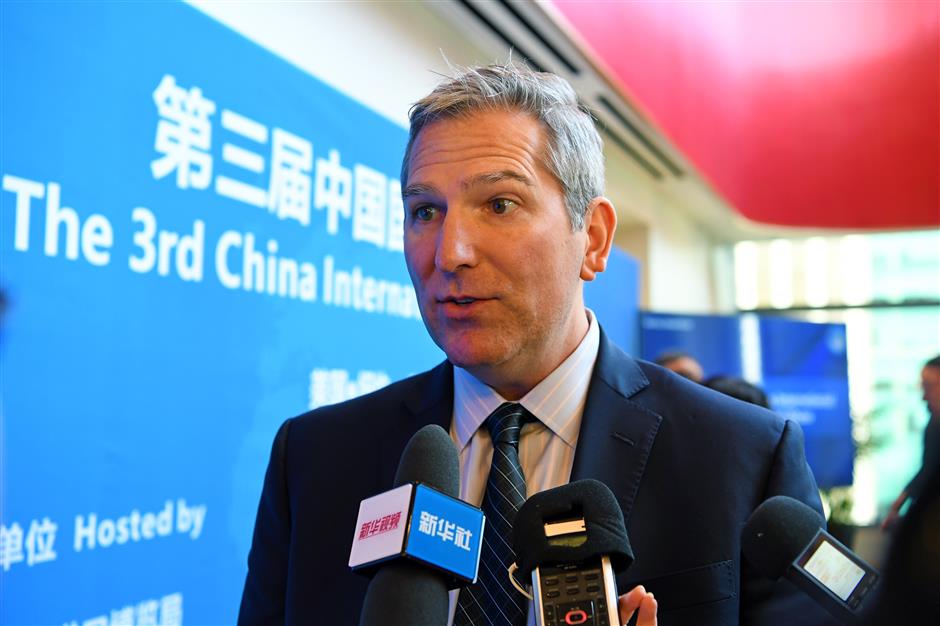 Jeff Zettel, Aramark Corporation’s associate vice president, is interviewed after the roadshow for the third CIIE in New York, US, on Monday.

Several US enterprises have expressed continued interest in participating in the China International Import Expo, after an overseas promotion for the event was held in New York on Monday.

A total of 41 companies from the United States have signed up for the third CIIE in November 2020, with many participants deciding to expand their exhibition areas, said Liu Fuxue, vice director of the CIIE bureau.

During the second CIIE, which concluded on November 10, US exhibitors not only made the top ranking in terms of total exhibition area from a single country or region this year, but also bagged US$12.96 billion of preliminary deals, accounting for 18.22 percent of the total, said Liu.

These numbers illustrate that in spite of the current tough climate of bilateral trade relations, the ties between Chinese and US enterprises is still strong, said Gu Chunfang, economic and commercial counselor of the Chinese Consulate General in New York.

About 20 US companies signed up for next year’s event even before the second CIIE ended, according to a news report published by China Central Television on November 7.

Liu said that US companies proactively joined the first and the second CIIE, reporting solid results.

“In talking with American business leaders and participants, I am aware that US companies still give much priority to the Chinese market with enthusiasm, despite the current China-US trade frictions,” said Xu Chen, chairman of China General Chamber of Commerce-USA and president and CEO of Bank of China USA.

As US business leaders regard the CIIE as a valuable platform, many top executives lead their delegations to the expo, showcasing their businesses and diving deeper into the Chinese market, said Xu, who added that the import market will play a more important role in China’s economic development.

“We will continue to lower tariffs and institutional transaction costs, foster a number of demonstration zones to promote import by creative means, to import more high-quality goods and services from around the world, including the United States,” she said.

As the world’s first import-themed national-level expo, the CIIE is a great platform for Chinese and US companies to go further together, Gu added.

“(The CIIE is) a fantastic opportunity for us and we’re looking forward to doing it again in 2020,” said Zettel, who signed an agreement with the CIIE bureau on Monday.