Commercial planemakers touted strong post-pandemic prospects for the Chinese aviation market as the country's largest air show opened on Tuesday, with an increasing share of the spoils expected to go to domestic manufacturers.

The normally biennial Airshow China in the southern city of Zhuhai, delayed by a year because of COVID-19, is being held until October 3.

Commercial Aircraft Corp of China said it expected China's share of the global passenger aircraft fleet would rise to 22 percent by 2040 from 20 percent in 2020. Its latest market forecast said 41,429 passenger jets worth US$6.2 trillion are expected to be delivered globally over the next 20 years.

Passenger demand is expected to rise by an average of 3.9 percent a year globally and 5.7 percent a year in China over the next 20 years, the planemaker added.

COMAC forecast that over the next 20 years, Chinese airlines would need 953 regional jets with 90 seats, the size of the ARJ21. That compared with 261 planes with 120 seats like Embraer E2 models and the smaller version of Airbus A220.

COMAC deputy marketing manager Yang Yang said there was enough room in the market for all players. "The aviation market is as vast as the Pacific Ocean, where we have our own competitive territories," he said.

COMAC expects local certification this year of its larger 160-seat C919, a rival to the Airbus A320 and Boeing Co 737 families, though it will take time to ramp up production.

"It reminds us that we need to fully listen to our customers and use our best products and best services to support our customers, because the post-COVID aviation market is full of competition, which is more intense than before COVID," Airbus China CEO George Xu said of the C919's entry into the market.

Xu said on the show's sidelines that the manufacturer was still in talks with China about certification, which along with support services was the key to customer confidence in placing orders.

"We believe the Chinese aviation market will become the world's largest in the future. Embraer has already built a strong and positive presence on the market providing a solid foundation for our most advanced jet, the E2," Embraer Commercial Aviation CEO Arjan Meijer said in a statement. 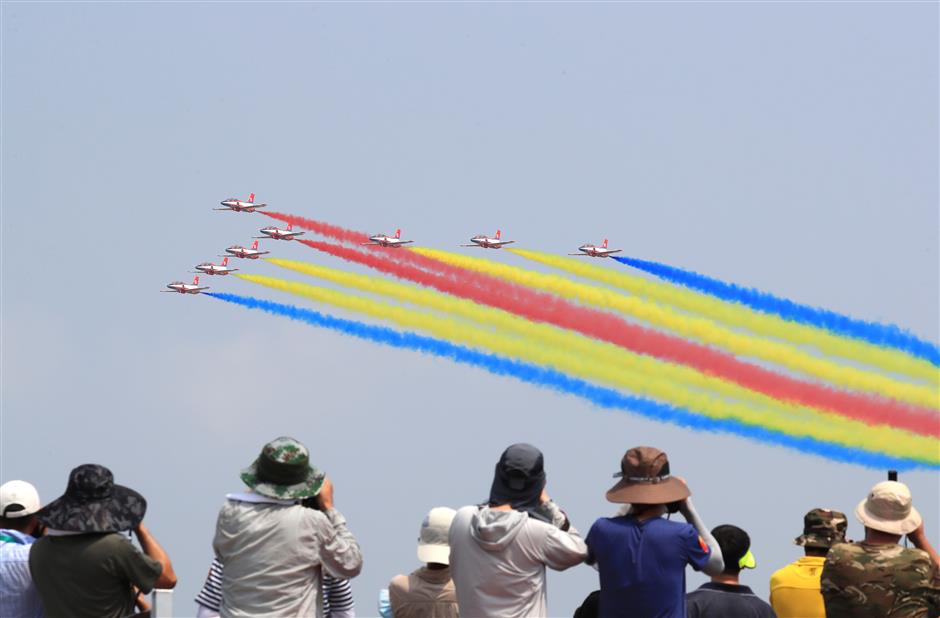 About 700 enterprises from 40 countries and regions are taking part in the air show, for which the number of venues has increased from eight to 11.

The show is a mostly domestic affair because of tight quarantine rules, and local aerospace and defense firms have ramped up their presence.

The flying demonstration on a hot and hazy day that had crowds scrambling for shade included a colorful display with J-10s by the Bayi aerobatic team following an opening ceremony attended by military and government officials.

China's J-20 fighter jet flew at the show with domestic, rather than Russian-made engines for the first time.

On the ground, China showcased a prototype of the CH-6 long-endurance drone capable of reconnaissance and strike operations. The drone has a cruising altitude of 10,000 meters, "but it can go as high as 15,000 meters," said Qin Yongming, general manager of drone maker Aerospace CH UAV Co.

"It can fly for longer periods (than previous models) ... it can carry out longer missions, with higher efficiency without any time limits."

Other debutants included the WZ-7 high-altitude drone for border reconnaissance and maritime patrol, as well as the J-16D fighter that has the ability to jam electronic equipment.

Both have already entered service with the Chinese Air Force, state media reported.

Organizers said the next Airshow China will be held from November 8 to November 13, 2022, and returning to the pre-pandemic schedule.