Li Min, a freshman at Fudan University, bought an iPad on the online shopping site Fenqile.com last year, on the recommendation of a roommate.

“At the time, I was preoccupied with examinations and didn’t have enough time to compare phones on various online sites,” she said. “After learning that my roomie was using Fenqile, I just followed suit.”

Founded in 2013, Fenqile is affiliated with Shenzhen-based Lexin Group, one of China’s leading financial services providers.

The online shopping mall focuses on young spenders, helping them buy consumer electronics and other products on installment-payment plans.

Campuses are fertile ground for online finance. The number of university students reached 37.4 million in 2016, creating a consumer market estimated at 452.4 billion yuan, according to a 2016 report on college student spending and finance.

After China Merchants Bank issued its first student credit card in 2002, many banks jumped in to target this lucrative consumer base. By 2007, almost one in four campus students had a credit card.

But as cardholder numbers kept rising, so did overdue payments. By 2009, the bad-debt problem had hit such alarming levels that Chinese regulators halted the issuance of campus credit cards.

“Against that backdrop, a handful of installment-payment platforms like Fenqile found a niche that has mushroomed since 2013,” said Zhang Yu, a Beijing-based analyst at iResearch Consulting Corp and the author of the 2016 student finance report.

An array of online platforms target the campus crowd, including peer-to-peer lending sites like Shanghai-based Maizi Financial Services and the financial arms of e-commerce giants like Alibaba Group and JD.com. 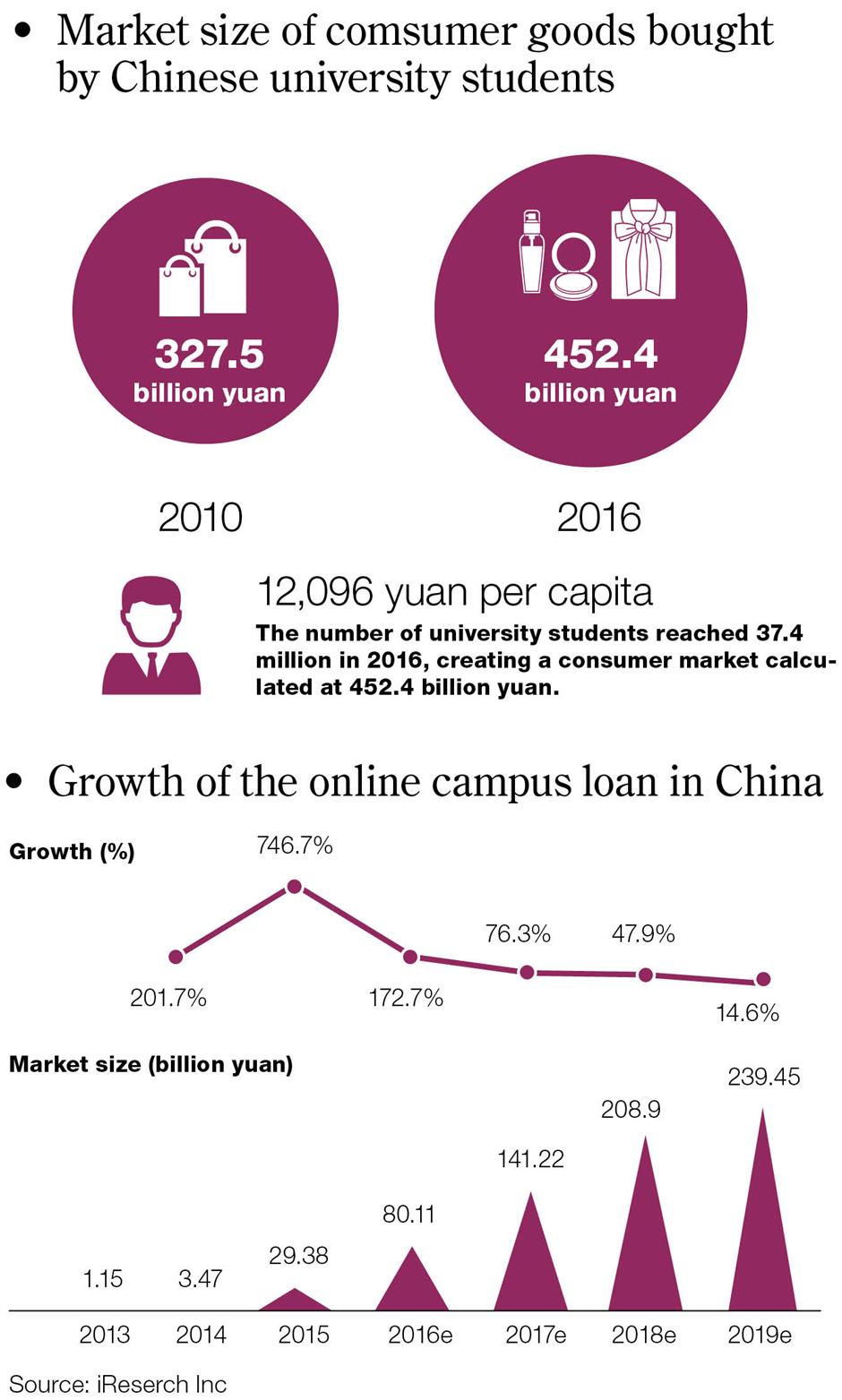 Business was booming until last year, when soaring student debt again caught the headlines. Reports of loan sharks coercing female students to provide nude pictures of themselves as collateral for loans jarred the nation. Even more alarming were reports of suicide among students unable to repay large sums they had borrowed.

In response, Chinese authorities intensified their crackdown on dubious behavior related to online lending to students, but that tough stance appears to be easing.

In May, the China Banking Regulatory Commission, the Ministry of Education and the Ministry of Human Resources and Social Security re-opened the door for banks to return to student lending, with tight regulations attached that bar unlicensed lenders and set forth rules on bank loans.

Some banks responded quickly to the call of the regulators. In June, the Shanghai branch of China Construction Bank launched an Internet “micro loan” called "xue e-credit" for college students. It also formed a pact with the Shanghai University of Engineering Science to educate students on rational borrowing habits.

“College students have long been our target clients,” said the credit card center of China Merchants Bank. “We want to help them cultivate good credit habits because they will become the backbone of our society in the future.”

The bank has promoted a series of distinctive cards, like “Hello Kitty” cards, and co-branded cards with the National Basketball Association to appeal young consumers.

“Banks are allowed to return to the fertile ground of campus lending, but it still remains to be seen if they will fare better this time,” said Zhang. “After an eight-year withdrawal from the campus credit market, traditional banks are faced with a lack of student credit data.”

As a result, the banks are now teaming up with big market players to take advantage of their strengths in financial technologies.

For example, the Industrial and Commercial Bank of China has launched a co-branded credit card with Fenqile, earmarking Wuhan University, Zhongshan University, Sichuan University and six others as a pilot program to test business procedures, according to media reports.

When asked about the relationship between banks and Internet finance providers, Zhang said the banks “are now functioning like a reservoir,” with the water, or money, channeled by the big data of online platforms to “thirsty” young consumers.

Installment-payment systems will become a main focus of online finance platforms, he added.

“The platform doesn’t provide credit services,” Fenqile said in a recent announcement. “Our funds come from banks and other licensed financial institutions. We are acting as a go-between for banks and those who need money.”

Zhang predicted that in the next few years, the authorized consumer-loan financial companies, mainly affiliated with banks, will be playing a bigger role.

Besides, the company launched a customized campus loan product named “xiaohua” in 2015. “Students will be granted an unsecured credit line ranging from 4000 to 8000 yuan based on their educational backgrounds. Currently, the product has been promoted in more than 1,200 colleges and universities in the country,” the loan service provider said.

I-pad buyer Li, said she probably wouldn’t consider borrowing money from a bank anytime soon. She said it would be too “time-consuming,” noting the experience of friends shuttled from one counter to the next when applying for loans or credit cards from traditional lenders.

“It is much quicker and easier for me to use the online platforms,” Li said.

In registering on Fenqile, a consumer has to provide basic personal information, like ID card number, phone and contacts for parents or friends. A facial recognition process is also required. Li said it took several days Fenqile to approve her application.

What she may not be aware of is that banks are now the backers of such online financial services providers.