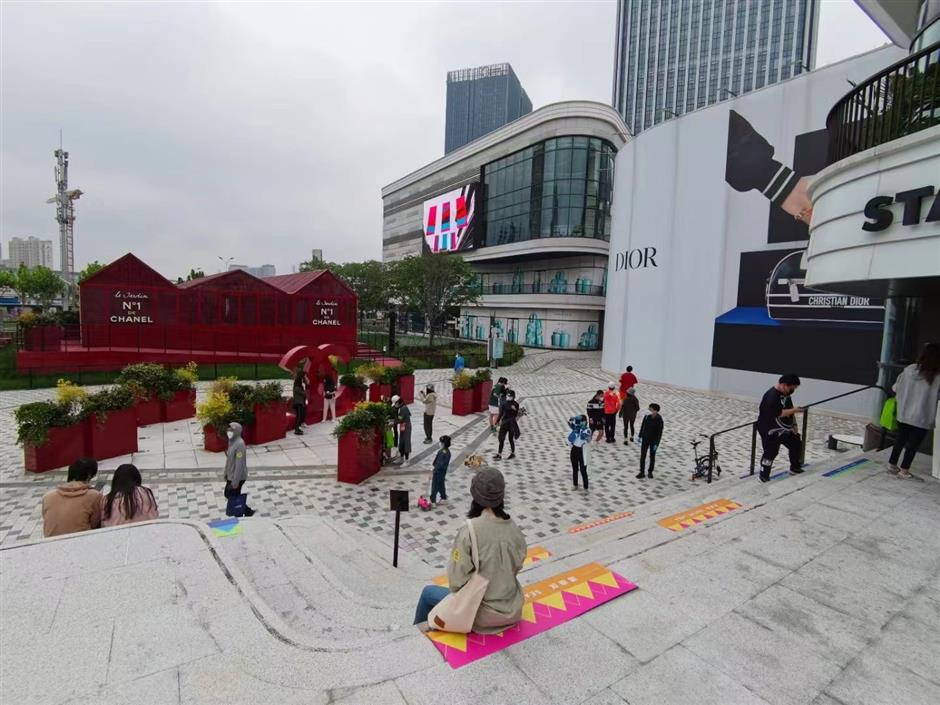 Taikoo Li Qiantan in Pudong New Area welcomed its first batch of customers on Friday in more than 50 days. 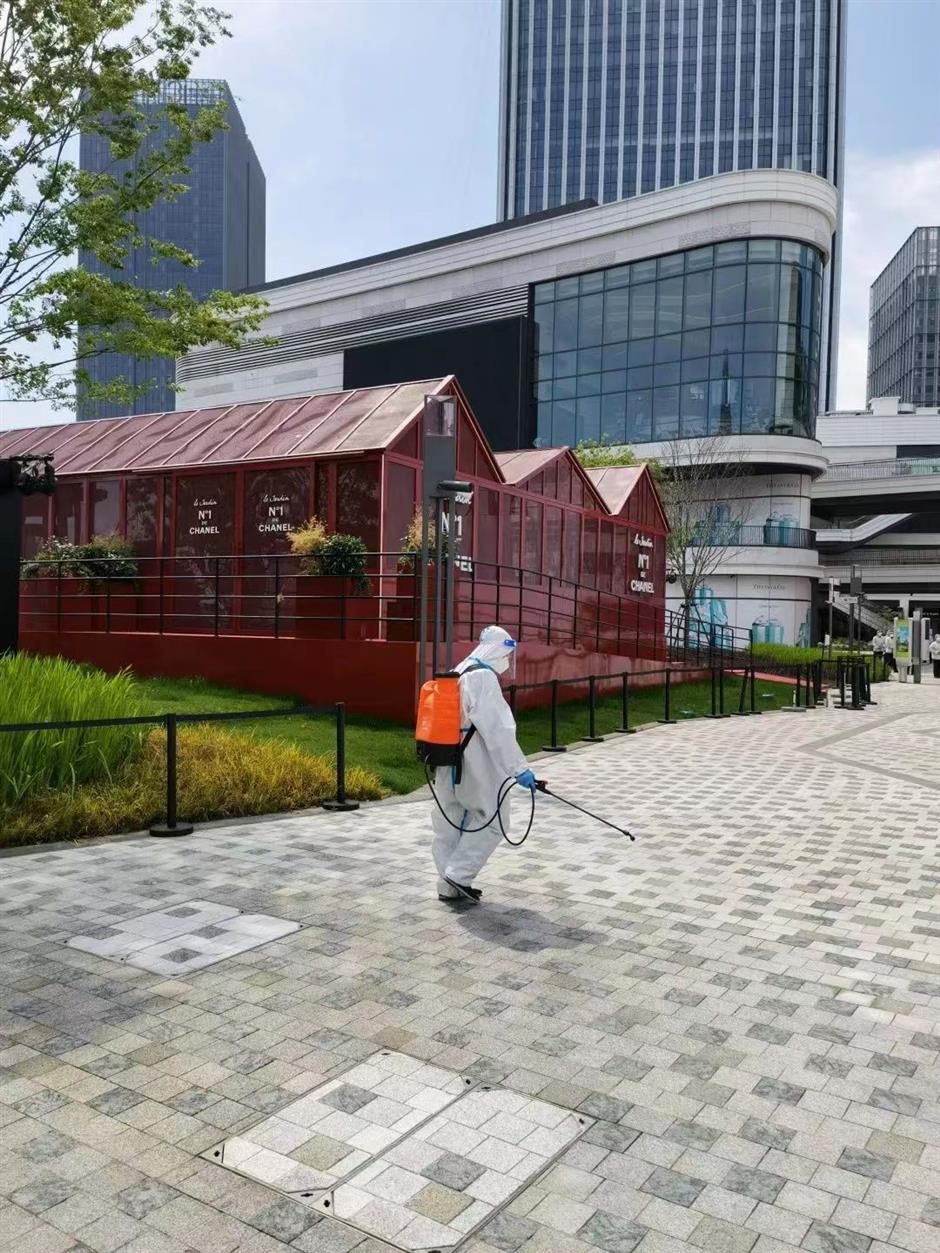 Thorough sanitization and disinfection was conducted before Taikoo Li Qiantan reopened to the public on Friday.

A handful of shopping malls in Shanghai have reopened their doors to the public as retailers around the city begin to make some cautious attempts to lure customers back to the offline scene.

Taikoo Li Qiantan, a lankmark retail complex located in the heart of the thriving Qiantan area on the east bank of the Huangpu River, officially resumed operations on Friday, more than 50 days after Shanghai hit the pause button to prevent the spread of COVID-19 with a citywide lockdown.

The 50-50 joint venture project between Swire Properties and Shanghai Lujiazui Group, which was officially unveiled last September, has nearly 40 of its 250 shops, including over 30 F&B outlets and six luxury and contemporary fashion labels, resuming business under strict pandemic-control measures.

The 120,000-square-meter retail complex now operates six hours a day from noon to 6pm, backed by more than 350 staff, both from the complex and the stores. All who are under closed-loop management will take one antigen test and one nucleic acid test every day.

To comply with the city's pandemic control requirements, the "venue QR code" and the all-in-one machines for health code scanning, ID verification and temperature check, also known as "digital sentinel," have been deployed at the mall, which has set up three temporary entrances and exits and imposed foot traffic monitoring and control.

All the F&B outlets operating at the moment do not provide dining services, and outdoor seating has been placed around the mall instead at a couple of venues. 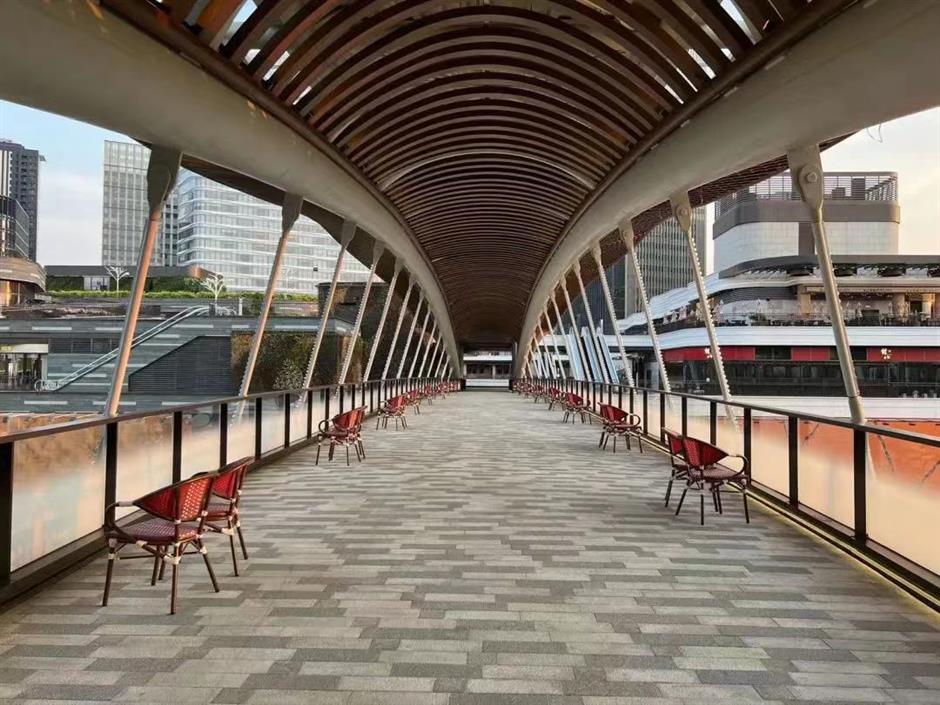 On the other side of the Huangpu River, meanwhile, Songjiang INCITY, a more than 150,000-square-meter shopping mall in the south-western district which opened last November, also has had 27 stores resume operations, mostly online, since the beginning of this month. The Yonghui Supermarket, the only store providing offline shopping services at the moment, regularly received around 1,800 customers a day over the past three weeks.

As planned, another 27 stores will be added by the end of this month which will then bring the number of stores back to business to 54 in total, accounting for about 35 percent of its tenant portfolio, according to Yang Lei, an operation official with the mall.

"Recovery of the local retail scene in general is still in the very initial stage, and what we have noticed is that both the landlords and tenants have begun making preparation works in a very proactive way," said Anny Zhang, managing director for JLL East China.

"An increasing number of F&B outlets as well as supermarkets have filed applications to become 'supply guarantee' enterprises, some retailers have been actively involved in businesses such as online group buying and pre-sales activities, while more landlords have been working with their tenants along with property managers to draft detailed plans for phased business resumptions in compliance with pandemic control policies."