Breath of fresh air in the realm of entrepreneurship 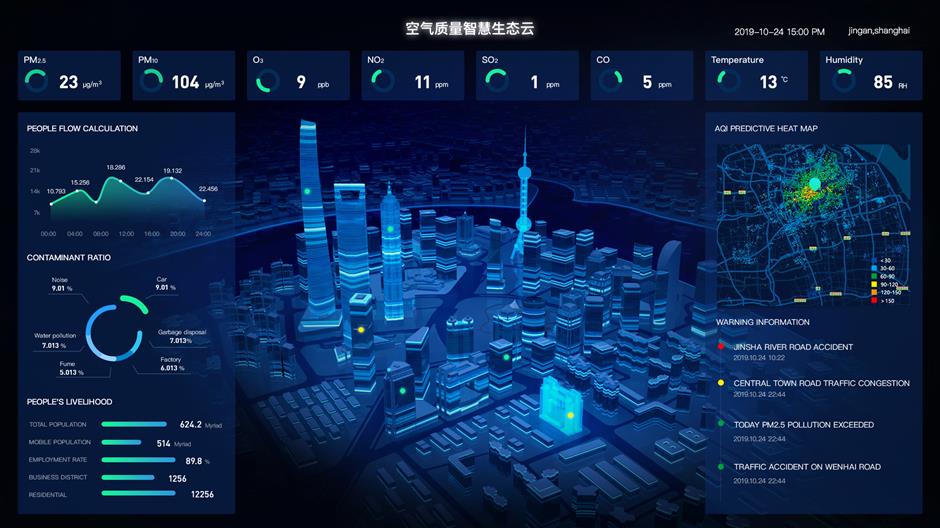 It’s that time of year again, when smog comes back to the skylines of Chinese cities.

Smog is something some Chinese have learned to live with. On smoggy days, people put on their face masks, close the windows and turn on air purifiers.

However, heightened concern about air quality and related health effects are spurring demand for better air-quality monitoring, with a rising crop of startups coming into the field.

With close to 100 million yuan (US$14.3 million) in revenue last year, Shanghai-based DST Technology, founded in 2012, has been a poster child in air-quality monitoring.

Unlike Xiaomi and other manufacturers of consumer-oriented air-monitoring devices, DST Technology is fixated on selling to corporate clients.

“We are more of a ‘2B’ (to business) company, targeting application scenarios like shopping malls, offices and upscale properties,” Liu Sitan, founder and chief executive of DST Technology, tells Shanghai Daily in an interview.

The company started out making sensors. Having worked at Honeywell for five years as a senior sales representative responsible for a whole product line, Liu is well-versed in the evolution of industry-grade sensors. In recent years, as environmental protection moved to the forefront of public consciousness, Liu saw that spontaneous air monitoring conducted by sensors could be a market worth billions in China. That was the principal motivation for him to leave a well-paid job at Honeywell and set up shop on his own.

“A lot of the so-called air monitoring is actually just air-quality testing, which is static and temporary,” says the 37- year-old. “But air quality keeps changing every minute.”

Instead of sampling air for tests, he explains that a dynamic monitoring process will yield more accurate results. 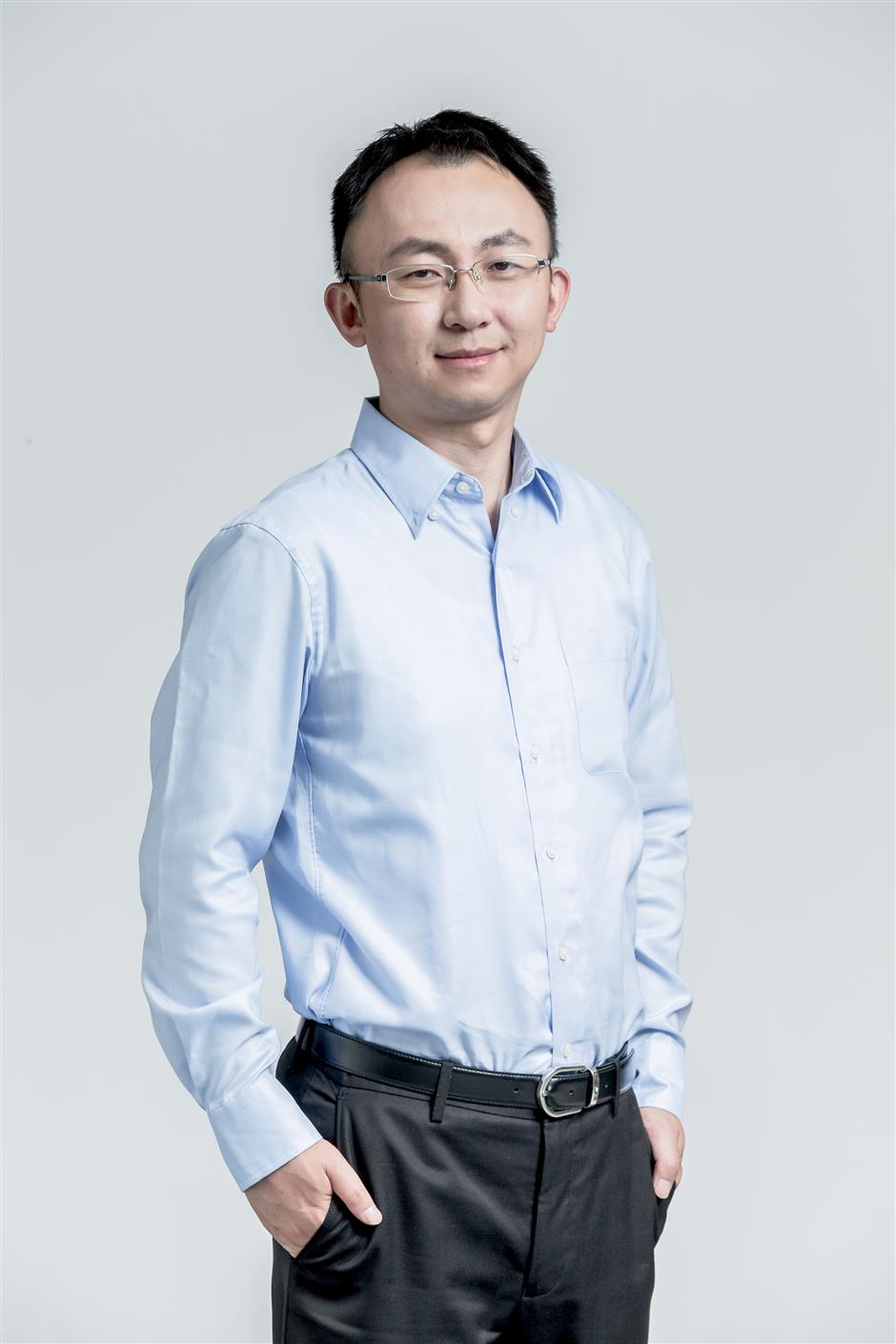 "A lot of the so-called air monitoring is actually just air-quality testing, which is static and temporary. But air-quality keeps changing every minute." —— Liu Sitan, Founder and chief executive of DST Technology, a startup firm specializing in air quality monitoring

To meet this goal, DST Technology is banking on an abundant supply of self-developed air monitors and Internet of Things technology. According to Liu, every single company device is capable of recognizing and monitoring a myriad of variables, including temperature, humidity, carbon dioxide, formaldehyde, air pressure, noise and PM2.5, the fine airborne participles that, once inhaled, stick to human lungs and settle there. High levels of PM2.5 are a principal culprit of smog and respiratory diseases.

Liu said measuring these variables is necessary because they are closely tied to human health. He said the company’s technology can also be applied to industrial uses, such as smoke-filled factory floors, to keep the levels of hazardous gases like ammonia, ozone and hydrogen sulfide under 24-hour supervision.

“We also equip our devices with the capacity to monitor anions in the air,” Liu says. “Multiple scientific findings point to anions as a factor conducive to longevity.”

From e-commerce platforms to offline retail stores, the Chinese market is awash in air-quality monitors, priced at between 200 yuan and well over 2,000 yuan. The complex specifications on their packaging often leave consumers scratching their heads. In the absence of authoritative guide, DST Technology seeks to provide the benchmark, claiming its products have better quality, data control, reliability and performance consistency.

“All of this (touting) is down to actual performance,” says Liu, who claims that devices with a sticker price of several hundred yuan usually have a large margin of error. “With the low accuracy in their readings, they are, in a certain sense, just toys offering little valuable health indicators consumers can rely on.”

DST Technology’s devices appear to be scoring way beyond the standard, with their measuring accuracy falling within a range of 5-10 micrograms per cubic meter, says Liu. 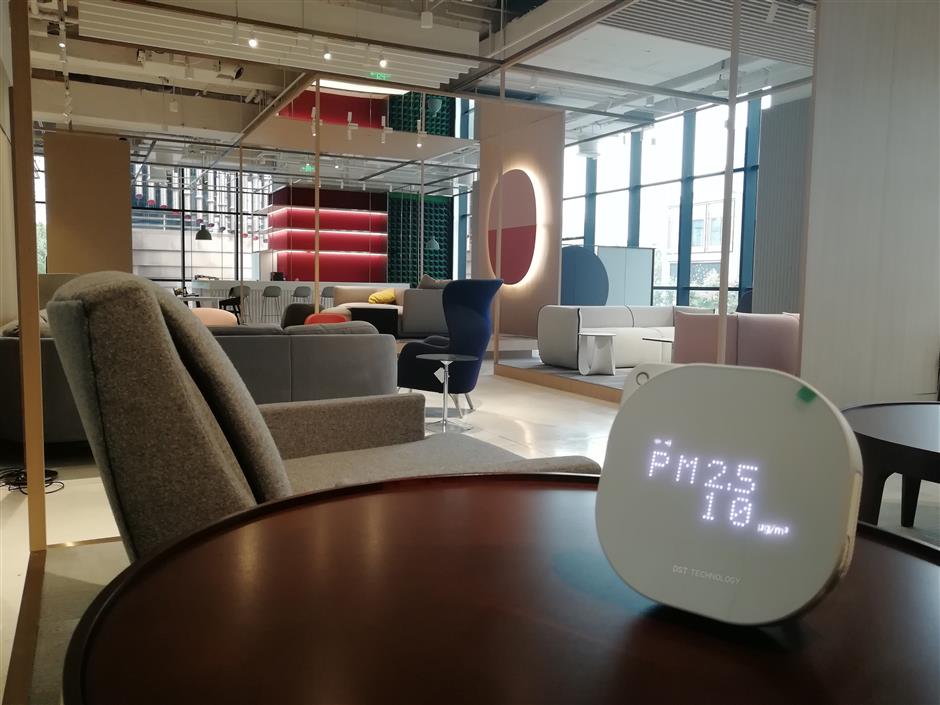 Every DST Technology device is capable of recognizing and monitoring a myriad of variables, including temperature, humidity, carbon dioxide, formaldehyde, air pressure, noise and PM2.5. — Photos by courtesy of DST Technology

He notes that the firm’s products can be up to 90 percent as accurate as top industrial gear, but sell for only a 10th of the price on average. In his words, the price gap between premium monitors and cheap ones can be “hundreds of thousands of yuan, if not millions.”

That’s why DST Technology, he says, aims for the area in between. Liu’s tactic is one of leveraging supply-chain advantages through economies of scale, eventually bringing down retail prices.

Nonetheless, he is aiming higher than competing only on price. Instead, he bets big on establishing a firm toehold through after-sale services.

“We are not just a hardware manufacturer bent on seeking a lucrative one-off sale,” he says, pausing. “We are keen to deliver better services to customers through data collection, mining and analysis.”

Liu’s vision for DST Technology is to evolve it into a software-as-a-service company in the field of air monitoring.

One of his winning strategies is to cooperate with developers of high-end property. Selling to them on a large scale could significantly boost the startup’s bottom line. Liu reckons that sending air-quality updates via mobile app to developers and homeowners would create customer “stickiness” and added value over a long period of time.

Another potential growth area for DST Technology is a move into the so-called “long-term rental” market. This is a common practice among largescale Chinese real estate brokers like Lianjia and Danke. They rent a home from a landlord, redecorate and then sublet it.

This burgeoning sector is the latest in a series of examples of customers bearing the consequences, occasionally fatal, when profit-driven businesses tend to cut corner. Air quality in these apartments, which are sublet within a year or less after being obtained from original owners, is dubious at best.

Risks in this sector went undetected until an Alibaba employee died of leukemia last year in Hangzhou, capital of Zhejiang Province and home to the e-commerce titan. His death came six months after he moved into a home operated by Ziroom, the long-term rental arm of Lianjia. The victim was believed to have been exposed to excessive levels of formaldehyde, a known cancer agent.

Liu said tragedies like that could have been avoided if high-accuracy air monitors had been installed to trigger alarm and possible intervention.

In addition to home rentals, DST Technology is zeroing in on air pollution in offices, a growing source of complaint among white-collar workers. The startup counts upscale business property management firms like JLL and shared-office operators such as MIXPACE among buyers of its air-monitoring products and services.

Liu said when high concentrations of toxic gases like formaldehyde or a sudden spike in PM2.5 are detected, cloud services run by DST Technology will initiate calls to service providers specializing in air purification. This has been a practice well replicated across industrial hubs like Caohejing in southwestern Shanghai, according to him.

“Our goal is to build an ecosystem,” Liu says. “After you are done with decor, we monitor and provide the data, proving to customers that we care about their health. We won’t be a referee and a player at the same time.”

Over the years, DST Technology has been a supplier to big-name malls and business properties like Kerry Center, Taikoo Hui and even foreign consulates in Shanghai. Customer orders stream in as the firm gains more recognition.

Despite its rising market share and high profile, DST Technology is cautious about tapping the frenzy over “smart home” applications in China as a “2C” (to customer) player, mainly due to weakness in branding.

Names like Xiaomi have been plastered across all e-commerce platforms and retail venues, making it hard for smaller players like DST Technology to give them a run for their money. To avoid head-on competition, the startup is collaborating with universities, institutes and even Chinese academicians in science to promote research that Liu says will “cut through falsehoods and nonsense surrounding air quality.”

DST Technology has partnered with Shanghai University to run a project called “Green Smart Classroom” to gauge the correlation between environment and student performance.

He admits this takes time, but he is convinced it will pay off eventually. In that spirit, DST Technology has joined hands with Shanghai University to run a project called “Green Smart Classroom.” It uses two identical classrooms, both equipped with air monitors, but one is equipped with an extra fresh air system.

The purpose of the study is to see how an array of environmental factors, such as carbon dioxide, PM2.5 particles, sun and noise, affect student concentration, drowsiness and test scores.

“We know the environment is not fixed,” Liu says. “Students enter and leave a room. But experiments like this more or less uncover the impact of the environment on productivity.”

Although he has yet to reach any conclusion, Liu says his views are echoed by defining research on the topic. He cites a study in the British medical journal Lancet that reports human health is now 20-30 percent determined by factors like the environment. This has been proven, at least in part, by the increasing incidence of respiratory diseases, like pneumonia, lung cancer and asthma, among Chinese citizens as air pollution rises.

Fortunately, China may be headed for a deflection point in its environmental crisis. As many media headlines suggest, clean air has moved up on the official government agenda. President Xi Jinping has emphasized the importance of preserving a “green mountain” and “clear water” on many occasions.

To entrepreneurs like Liu, this is a call for massive cleanup efforts amid a broader trend of concern about public lifestyles.

“What we do is ride the tide and harness our advanced sensors and Internet of Things technology in support of the human pursuit of health and a better lifestyle,” Liu notes.

Like many Chinese companies that venture abroad after success at home, DST Technology is also eying overseas markets with needs for air-quality monitoring services. South Korea could be a destination, among many others, because of its nationwide campaign to measure air quality at public facilities around the clock.

“This will be an immense opportunity for us,” says Liu, beaming. “In the past, smoke detectors were not mandatory, but now have become part of a modern building’s infrastructure. This all takes time.” 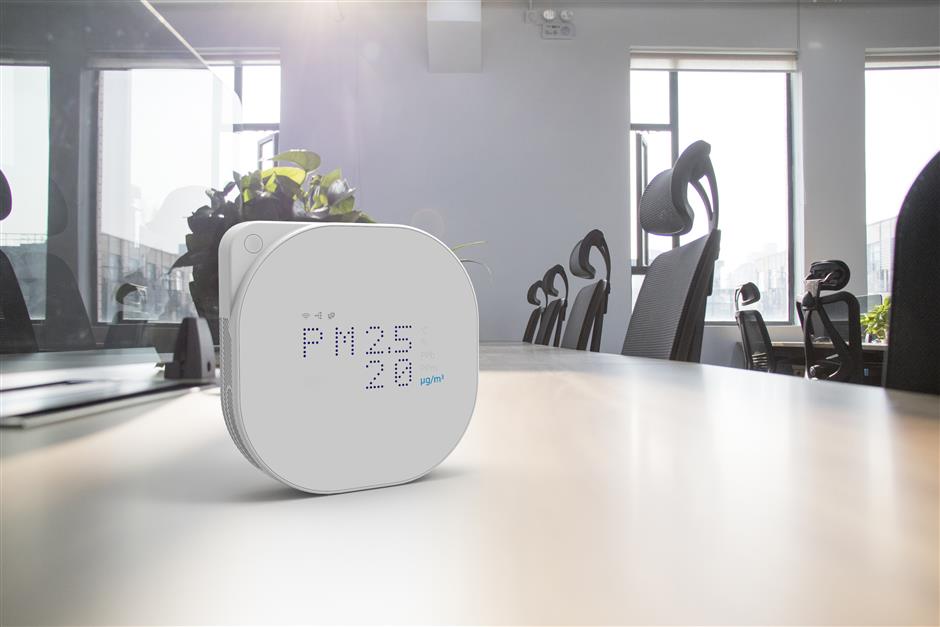