A half-sized model of the manned eVTOL aircraft was shown in an avian show in Zhuhai.

A Shanghai-developed five-seat "air taxi" will make its first trial flight in the city next March, after its debut at China's biggest air show in Zhuhai last month, Shanghai Daily learned.

The Vertical Take-off and Landing, or eVTOL aircraft, used in urban transportation, disaster emergency, energy and logistic industries, will create an over 100-billion-yuan (US$14 billion) market for the entire industry chain, Xie Ling, chief executive of aviation company Vertax, told Shanghai Daily in its Zhangjiang office.

The Vertax's Matrix 1 or M1 is an electric vertical takeoff and landing aircraft to operate as an "air taxi" service. It's designed with five seats, with a max range of 250 kilometers, a speed of 200 km per hour and 20 rotors. As it takes off and lands vertically, giving users the flexibility to serve almost any community.

"It's a faster, cleaner and smarter way of transportation and creates a future for urban air travel available to everybody," Xie said. 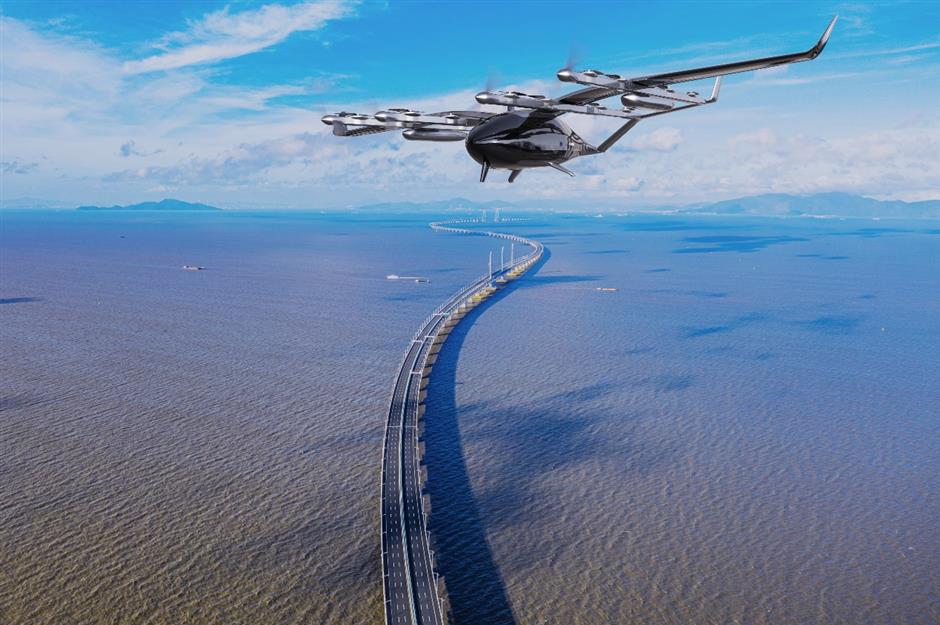 A virtual picture of the M1, which can hold five passengers and fly 250 kilometers. It will have a trial flight in March, in Shanghai.

The half-size M1 aircraft model was shown at the 2022 China International Aviation & Aerospace Exhibition in Zhuhai in south China's Guangdong Province, along with the company's eVTOL smart cabin. Vertax plans to make a maiden flight in the East China UAV Base in Jinshan District in March.

But it's still a long journey before M1's commercial use, like city-to-airport services, as it still needs multi-step regulatory approvals, Xie added.

In China, new-energy carmaker XPeng has developed a "flying car" through its subsidiary, also not in commercial use yet.

Founded in April 2021, Vertax has an R&D center in Zhangjiang, and an assembly and pilot plant in Jinshan. It has an internally incubated company Fcourier Aviation, for assembly and production in Zhongshan of Guangdong Province. Since its founding, it has received three rounds of financing for a cumulative amount of almost 100 million yuan.

The investors include Chen Danian, founder of Shanda Network and Lianshang Network, and brother of billionaire Chen Tianqiao. V Fund and Winweal Investment are also investors in the project.

The core technical team, including Xie, has a veteran background in the avian industry, and used to be technical members in COMAC for China's C919 and ARJ21 development. 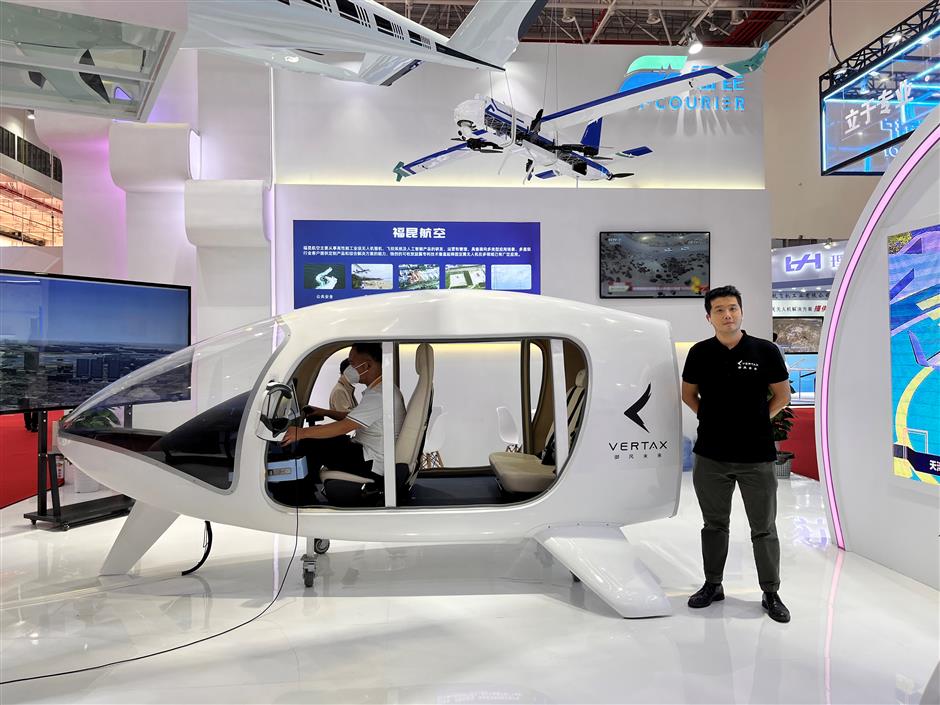 Vertax CEO Xie Ling poses with the cabin model of the aircraft. He is excited about the newly-released Shanghai policies.

The company has already mass-produced eVTOL fixed-wing UAVs (Unmanned Aerial Vehicles), as industrial drones without a human pilot onboard. Compared with other drones or UAVs, the models E5 and E6 offer long-range flights with up to 380 km cruising distance, and a flight time of 4.5 hours (E6).

The UAV orders contributed revenue of "several dozen million yuan" for the company, including overseas orders from Saudi Arabia. It supports cash flow and tech reserves for the coming eVTOL aircraft with passengers like M1, Xie told Shanghai Daily.

This may be the right time for the emergence of companies like Vertax, with Shanghai's updated blueprint.

The spotlight innovations, including brain-computer interfaces, artificial intelligence, eVTOL and 6G, are included. To achieve the target, Shanghai will establish city-level innovation centers, industrial zones and supporting policies. The tech zones, including Zhangjiang and Jinshan's UAV base where Vertax is located, are also mentioned.

Xie is optimistic for eVTOL's development with Shanghai's policies and the city's position in the industry chain.

With top firms like COMAC, Shanghai has a rich talent pool, mature testing, security and regulation approval systems, and many component suppliers in the Yangtze Delta region.

"Shanghai is a treasure trove, and arguably no other city in the country has as rich an aviation industry chain as Shanghai," Xie said.

In the future, Vertax will insist on independent research of airworthiness-driving core systems, manned eVTOLs for urban air travels with enhanced safety and longer flight range.