More than 80 percent of first round government-approved "white list" companies have resumed operations and production in Shanghai under a broad COVID-19 lockdown, including industry giants like Covestro, SMIC and Tesla, government officials said on Saturday.

The city has approved a new round "white list" of 1,188 firms, almost double the number of the first round, to hit the restart button, including logistics market leader SF Express and tech giant Huawei. More than 40,000 people have returned to work recently in the city, according to the Shanghai Commission of Economy and Informatization.

More measures are being released to speed up business and manufacturing resumption, such as digital certificates for transportation and people returning to work, and logistic support for special industries. They are expected to help business gradually return to normal in the city, as the China's top financial and shipping hub. 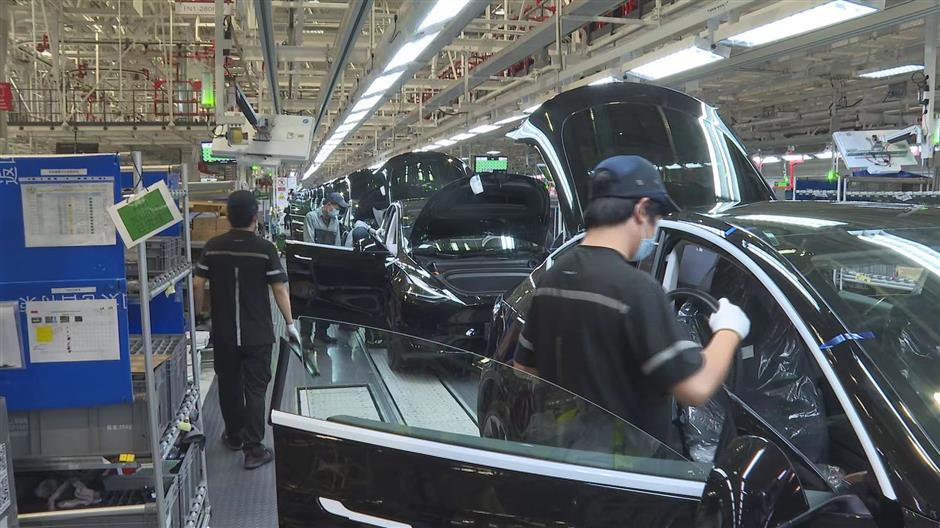 The resumption is a key task to ensure safety and stability of industrial supply chains and city operations. Leading firms and industrial giants will resume operation first, which will influence upstream and downstream enterprises, Zhang Hongtao, chief engineer of the commission, told a daily pandemic control conference.

More than 80 percent of the 666 first batch "white list" companies, including 247 foreign firms, have resumed production, with 1,188 firms approved as the next round. They cover automotive, integrated circuit, bio-medicine and chemical new materials sectors, Zhang added.

With final products such as cars and other durable consumer goods, the delayed demand is expected to be gradually released after the pandemic.

Automobile companies can make up for some of the production and sales lost by working overtime, according to a research note of the Huatai Securities.

The businesses restarting fits the country-level goal of snuffing out domestic transmissions while avoiding severe disruption to business and daily life.

US car maker Tesla's Shanghai factory officially resumed production on April 19, with about 8,000 employees back to work so far. Tesla said it is actively promoting the resumption of production at more than 100 parts manufacturers with the help of relevant government departments.

"We still have full confidence in China's economy," said Grace Tao, vice president of Tesla. "The pandemic is a short-term test. We have seen China's ability to cope with challenges and we believe that normality will soon return."

Its supply and logistics chains are in a "warming up" process, which has resumed 80 to 90 percent capacity, said Song Gang, manufacturing and operation director of the Tesla Shanghai Gigafactory. 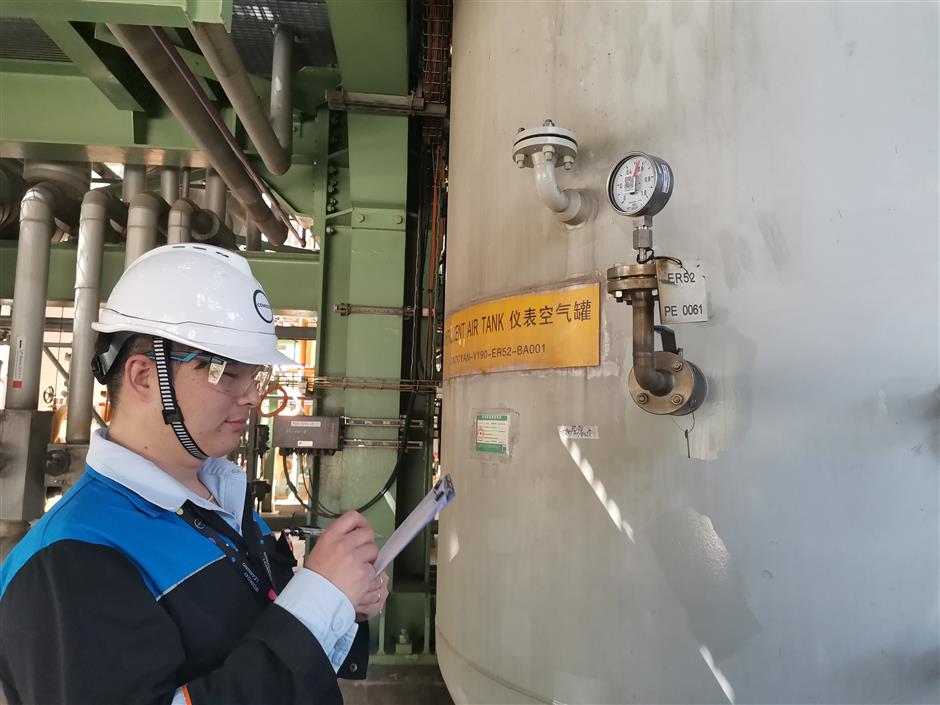 An employee of Covestro works on site at the Shanghai Chemical Industry Park.

German-based Covestro, with an integrated site in Caojing of the Shanghai Chemical Industry Park, has been running in closed-loop operation with about 900 employees and contractors, living on site on a voluntary basis. As of today, the Caojing site is running with a high capacity utilization rate.

As listed in the first round of "white list" firms, Covestro witnessed "a rebound in outbound logistics, including exports, as well as better materials availability as road logistics improves and work recovers at our suppliers".

AT&S, Austrian-based semi-conductors and microelectronics firm, with a production base in Xinzhuang Industrial Park of Minhang District, is increasing production capacity by calling back more employees, working in a close-loop management with roughly 2,000 employees.

Since late April, airfreight at Shanghai Pudong Airport has gradually resumed. Truckers have been successfully included into a "white list" that allows cargo transportation drivers to deliver raw materials or finished good across the country, said Chen Jiang Phua, Chairman of the board of AT&S (China) Co. He also hopes that regulators could further ease logistics control to support business restarting. 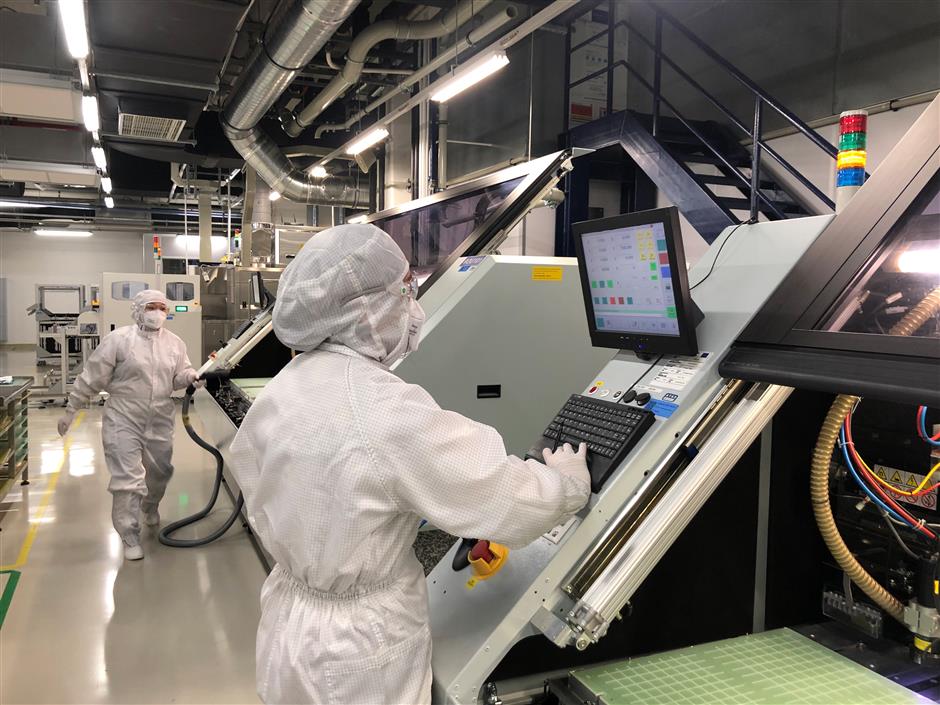 AT&S is increasing production capacity by calling back more employees.

Leading Shanghai-based chip firms have maintained production since the end of March. More than 6,000 people are working and living in the factories of Huahong while engineers have been working in the local factories of TSMC and SMIC, the world's leading chipmakers.

Chips are often seen as the "brain" of various devices, from smartphones to electronics and cars to industrial machinery. They are an upstream supply for many industries in the digitalized society, which makes the sector's restart vital.

More than 10,000 digital certificates for "returning to work" have been released citywide. The certificates, which can be accessed by the city's public service app Suishenban, contains PCR test result and other pandemic prevention information, which helps employees go back to companies easily and quickly. Recently, more than 40,000 people are returning to work.

The government will help firms alleviate logistics and transportation problems, especial for transportation and supply of raw materials required by chip, chemical and car firms. After verification, firms will generate electronic vehicle passes on Suishenban with personal information, nucleic acid/antigen information and route information. Shanghai, along with neighboring provinces and cities, have formed special teams on cross-provincial logistics, serving industries with high logistics demands such as automobiles and chemicals.

Under the guidance of the working group of the national ministries and commissions, Shanghai takes all measures to help enterprises overcome difficulties and blockages in resuming operations, from epidemic prevention, logistics to supply chain, Zhang said.

Since April, the Ministry of Industry and Information Technology, the country's top industry regulator, has dispatched special team to Shanghai to support the resumption of production.

On April 16, the Shanghai economy and information commission released a detailed guideline for enterprises to start the orderly resumption of work with controlled risks against this round of the COVID-19 pandemic.