Huang Cailiang is a nationally recognized expert in the traditional craft of red lacquerware, which was certified as part of China’s intangible cultural heritage by the Ministry of Culture in 2011. Nowadays, this tradition is preserved in Ninghai County, Ningbo.

Born in 1957 in Ninghai, Huang began to study red lacquerware at the age of 17, and has continued to do so for more than 40 years.

“Lacquerwares were meant to be practical objects for daily use. The ancient Chinese made lacquered wooden bowls and containers to prevent corrosion and prolong their lifespan. A red lacquered bowl was found in 1977 at the Hemudu Neolithic Site in Yuyao City, Ningbo. It dates back more than 7,000 years,” said Huang. 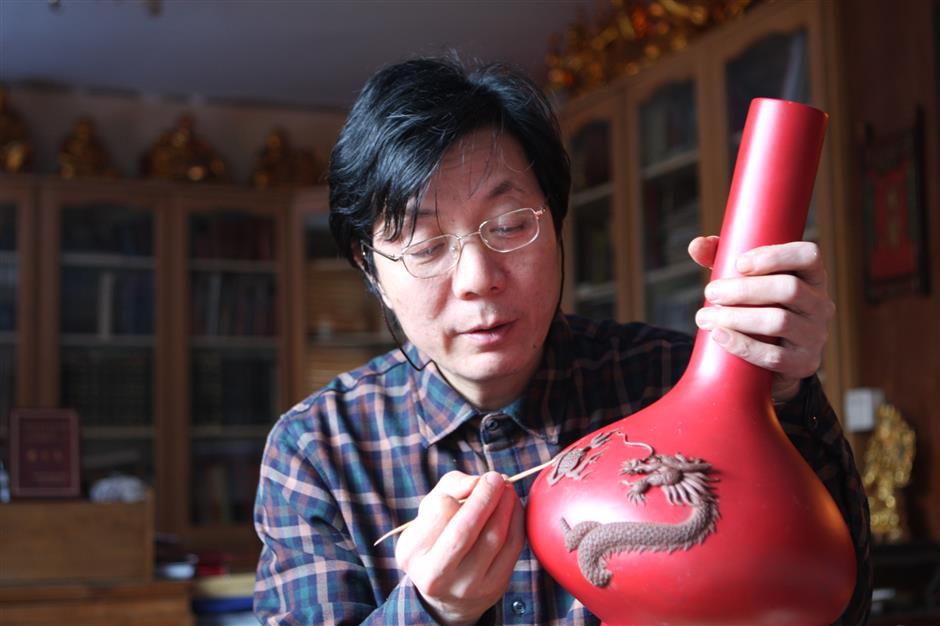 Huang Cailiang, an expert in red lacquerware, turns clay into a finely wrought dragon figure at his studio in Ninghai County.

In previous decades, the designs of these lacquered pieces often signified the rank of the user. More subtle patterns and carvings usually indicated a higher social standing.

Finely-wrought lacquerwares were especially popular during the Ming Dynasty (1368-1644) in Zhejiang Province. At that time, when a daughter was getting married, her parents would prepare red lacquerwares ornamented with gilded clay carvings as part of her dowry. Wealthy families would sometimes prepare hundreds of luxurious pieces.

The luxury and elegance of this craft continues to live on into modern times in Ninghai County.

“People in Wenzhou, Shaoxing and Jiaxing also used to make this kind of lacquerware, but now the traditional manufacturing craft has only survived in Ninghai County and people in other areas changed their ways. I think the lacquerwares of our ancestors are beautiful and we ought to make the same types of pieces they did, by employing the same materials and methods,” explained Huang.

Huang is building a museum in Ninghai to display lacquerwares he has made and collected, including traditional lacquerwares ornamented with gilded clay carvings that were made in the Qing Dynasty (1644-1911) and the Republic of China era (1912-1949). The museum will also have an area where visitors can make their own lacquerware pieces.

He also has his own studio on Outer Ring Road W., where he and four young craftsmen continue making lacquerwares the old-fashioned way.

It takes about half a month to make a lacquered basin with a handle. The first step to make a wooden basin is using an iron wire to bind the planks together. Red lacquer is applied later. Red is traditionally a color of joy and good luck, and the red lacquer will turn darker with time. 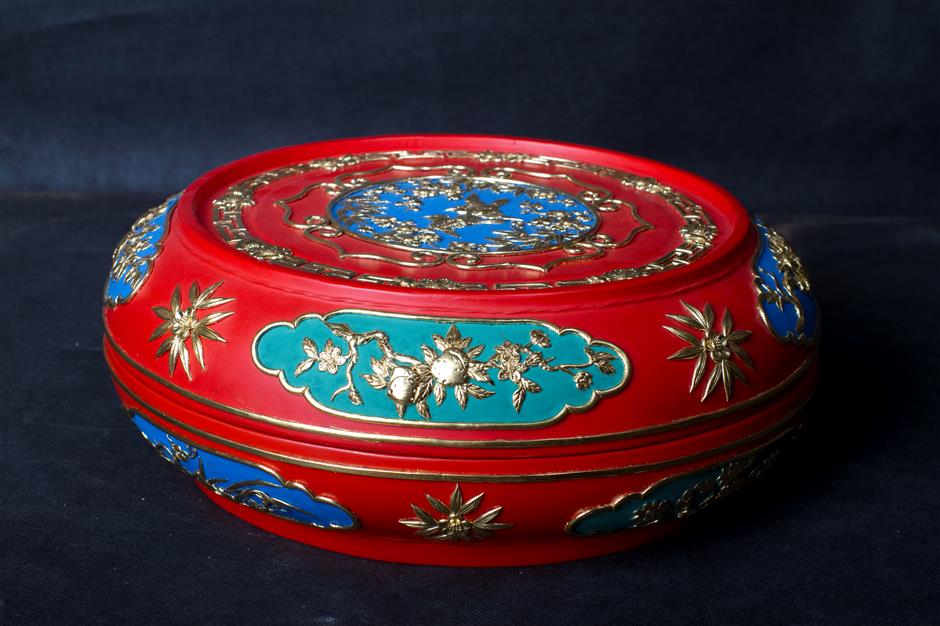 Red is traditionally a color of joy and good luck, and the red lacquer will turn darker with time.

The red lacquer is made with raw lacquer and cinnabar. Both materials are natural and are not harmful to humans. This made lacquered containers ideal for food storage in older times. Indeed, according to Chinese custom, married daughters would often visit their parents several days after their wedding ceremony. They would often come bearing food in lacquered vessels.

After being lacquered, containers are then ornamented with carvings etched in modeling clay made with oyster shells, tung oil and other materials. In the hands of a skilled craftsman, this clay can be turned into finely wrought figures such as dragons and humans with detailed facial expressions. In Huang’s studio, only the master himself is able to carve out facial expressions on small heads modeled in clay.

The clay will harden after about two days and the carvings will stay on the lacquerware, neither cracking nor felling off. Pigments are added with various natural minerals, with blue often going on a vessel’s lid and green being added to the body. This is meant to reflect the auspicious significance of blue skies and green earth in traditional Chinese culture.

These days, Huang’s lacquerwares are in high demand. The government of Ningbo even sent a few of his pieces to Daegu, South Korea, in 2011 as a token of friendship between the two cities. Huang also gets orders for his products from neighboring Jiangsu Province as well as Shanghai and Beijing.

“Ancient people used the lacquerwares as practical objects, while nowadays people buy them as artworks and collectables. Many will not use them out of fear that they will break. These things are not cheap. A tea caddy is 2,000 yuan (US$290), and a basin is 5,000 yuan,” said the artisan. 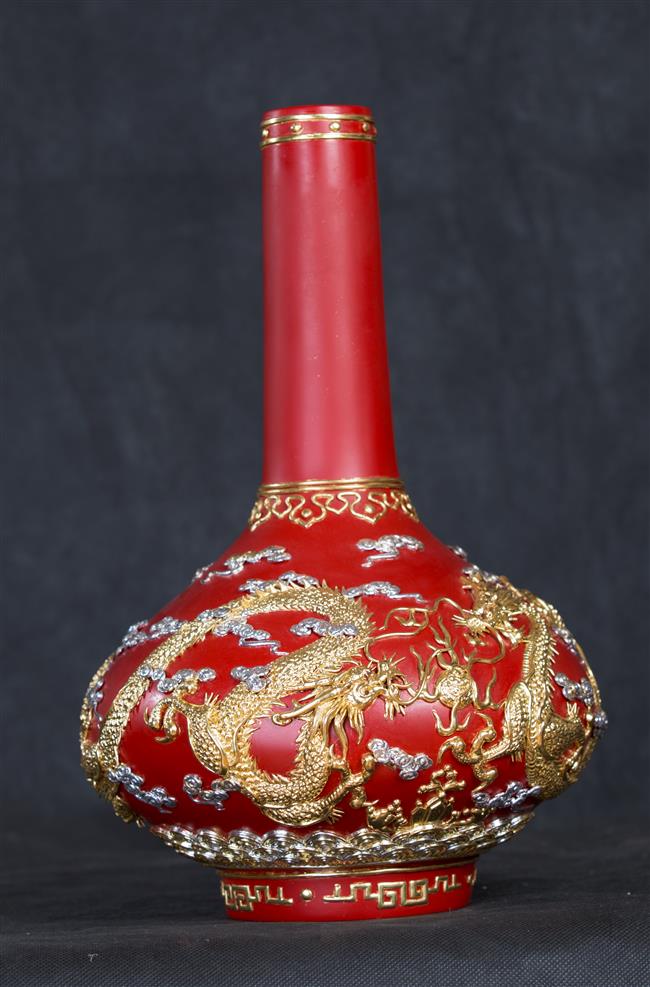 Huang’s studio is struggling to keep up with demand while still following traditional craft practices. Huang and his associates finish less than 50 pieces in a month, and it can take months to fulfill a customer’s order.

“I started studying lacquerwares during the 1960s, when red gilded lacquerwares were condemned as things for rich people to show off. Actually, few people at that time dared to make lacquerwares. Now the traditional craft is finally being preserved but there are only four young men devoted to this craft with me,” Huang said of passing on his knowledge and experience.

Huang started teaching lacquerware making at Ninghai No. 1 Vocational High School in 2007. He paid for the teaching materials and also offered promising students internship opportunities at his studio. He uses no textbooks and teaches through hands-on practice. He estimates that he’s taught hundreds of students, but only four remain with him at present.

“Parents now all want their children to go to universities. It’s hard to continue making traditional lacquerwares and it also requires young people to relax and hone their skills without being lured by other opportunities. So only a few of them are willing to stay with me,” said Huang.