The tradition of using human figures as the main subject in Chinese painting dates back nearly 3,000 years, much earlier than other genres like landscapes, birds or flowers.

Such early figure paintings can be seen today on silk and other fabrics found in ancient tombs or on their walls.

Figure painting reached its zenith during the prosperous years of the Tang Dynasty (AD 618-907), when it also branched into a subgenre called shinu hua, or painting of women of elite society or courtesan class. They have also been dubbed “paintings of beautiful women” or “belle paintings” since artists often painted their subjects according to current societal trends.

As a result, the genre became very popular in following centuries. Even today, shinu hua remains an important branch of traditional Chinese painting.

If you are reading on a mobile gadget, turn horizontal and enjoy the painting.

The painting “Court Ladies Preparing Newly Woven Silk” belongs to the Museum of Fine Arts Boston in the United States. It is not the original, but a copy rendered by Emperor Huizong (1082-1135). Shinu hua, or painting of women of elite society or courtesan class, prevailed in the Tang Dynasty (AD 618-907) and has remained a popular branch in traditional Chinese painting.

Of all the so-called belle paintings, “Daolian Tu,” or “Court Ladies Preparing Newly Woven Silk,” by Zhang Xuan (AD 713-755), a professional court painter in the Tang Dynasty, is considered one of the best.

However, the 37.1 x 145.3 cm, ink, color, and gold on silk handscroll we see in the collection of the Museum of Fine Arts Boston in the US today is not the original, but a carefully made copy rendered by Emperor Huizong (1082-1135).

As one of the last two rulers of the Northern Song Dynasty (960-1127), Emperor Huizong was known as a political failure who lost the throne to Jurchen invaders. But he was a talented artist and left behind hundreds of top-class artworks. The “Court Ladies Preparing Newly Woven Silk” is one of his better pieces.

The painting portrays three groups of luxuriously adorned court ladies working on newly woven silk in what is called gongcan or “palace sericulture,” an annual symbolic imperial rite in silk production. It involved raising the silkworms to making dresses from the newly woven material.

Viewing from right, the first group of four ladies are pounding the silk with long wooden poles. They stand in a diamond-shaped formation to produce the illusion of a three-dimensional space.

The artist applies bright, but elegant colors to their dresses, which are richly detailed.

There are only two figures in the second part of the painting, one sitting on the ground preparing thread and the other sewing while sitting on a stool. Their dresses and coiffure are also beautifully painted as those in the first group.

There are more figures in the third section. Three court ladies of different ages are stretching and ironing a long piece of silk cloth. There are also two maids, one helping stretch the silk and the other fanning a charcoal stove for heating the iron. Also, there’s a young girl dressed in pink and horsing around. 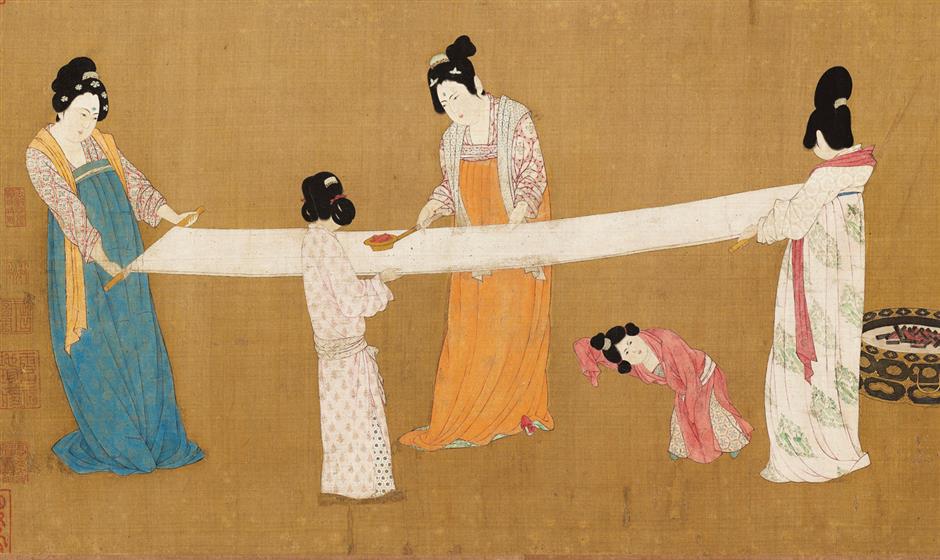 The four figures stretching and ironing the silk here are standing in a diamond-shaped formation to create a three-dimensional effect. The simplicity of the composition and background, along with the meticulous details of the figures are well balanced. 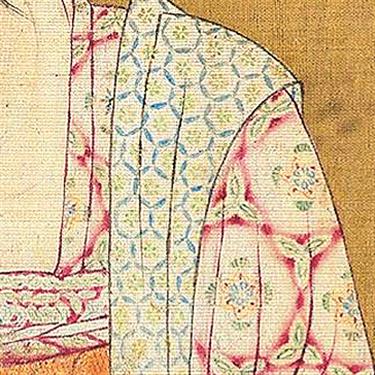 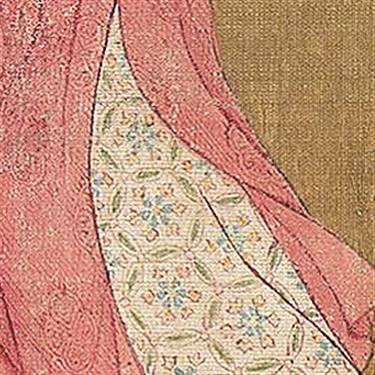 The colorful dresses reveal the sophisticated sense of style that prevailed during the Tang Dynasty.

Again, the four figures stretching and ironing the silk here are standing in a diamond-shaped formation to create a three-dimensional effect.

Apart from the essential figures and silk, there’s nothing in the background, which is painted golden as a symbol of the imperial court’s grandeur.

The simplicity of the composition and background along with the meticulous details of the women are well balanced in the painting. As a result, a viewer’s attention will naturally focus on the essentials of the artwork: beautiful ladies and the silk.

The painting was originally stored in the Old Palace Museum in Beijing, which was burned down during the invasion of the Anglo-French expeditionary forces in 1860. In August 1912, the masterpiece came into the possession of the Museum of Fine Arts Boston.