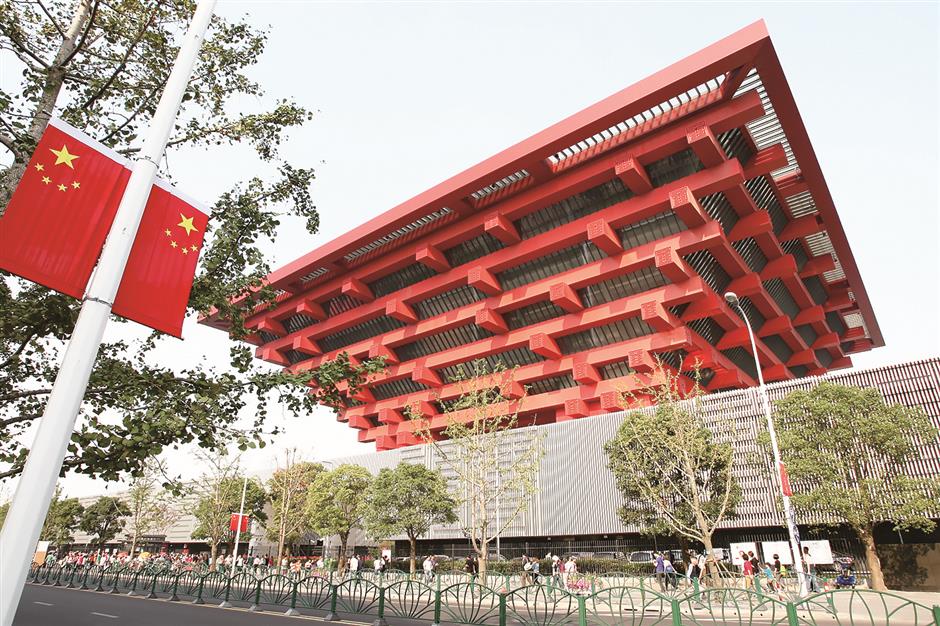 As one of the largest art museums in Asia, the China Art Museum in Pudong New Area, Shanghai, originally built as China Pavilion in 2010 for World Expo, imitated the look of traditional Chinese wood architecture.

Ancient Chinese architecture is a beautiful gem as well as an integral part of Chinese culture. It is also one of the three greatest architectural systems in the world, the other two being European and Arabic architecture.

According to archaeological discoveries, Chinese people began to develop this unique construction style as early as more than 7,000 years ago. Generations after generations and dynasties after dynasties, Chinese carpenters and artisans had ingeniously invented a great number of wooden components to build flexible and earthquake-resistant structures for durable dwellings, magnificent temples and grandiose palaces.

Most of the traditional Chinese architectural craftsmanship for timber-framed structures have been recorded in ancient building manuals or treatises such as “Mujing” or “Timberwork Manual,” which has usually been attributed to Yu Hao (AD 956-989), a highly experienced and skillful craftsman; “Yingzao Fashi” or “State Building Standards” written by Li Jie (1065-1110), a renowned writer of the Song Dynasty (960-1279) and “Qing Gongbu Gongcheng Zuofa” or the “Qing Architecture Standards,” a 74-volume and 2,768-page official architectural guideline of the Qing Dynasty (1644-1911), which was compiled in 1734.

These manuscripts and treatises had not only recorded the traditional methods, practices and techniques in production of complicated timber-framed structures, but also set standards and specific measurements for wooden architectural components and supports. So, that’s why so many ancient Chinese buildings, especially temples and palaces shared uniform structural features. 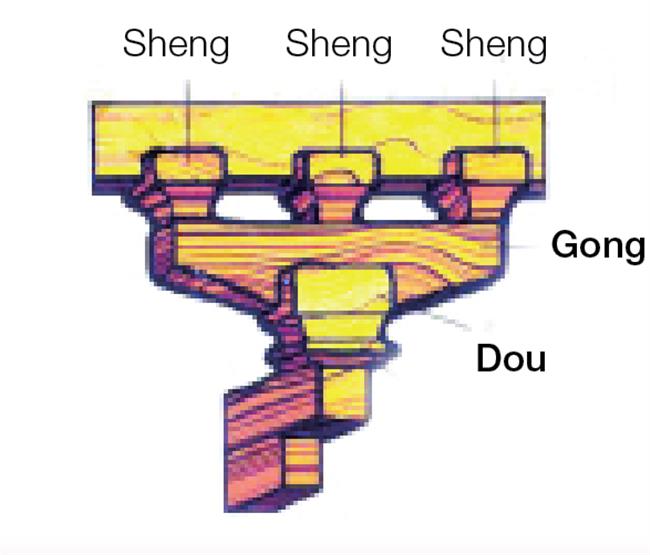 Dougong, or bracket set, is not only a unique structural element, but also one of the most important members in traditional Chinese architecture.

Thanks to the interlocking wooden bracket, the eaves of some buildings could project out as far as more than 4 meters, thus providing vital protection for the wooden structure and mud walls from weather damage.

The bracket sets also provide a vertical support for the uplifted roof edges, or the so-called flying eaves, designed to let light penetrate into the interior of a building.

Most monumental buildings in the Tang Dynasty (AD 618-907) employed a big number of large dougong to support projecting and flying eaves.

Apart from its practical function, dougong had also been used in ancient Chinese architecture for its ornamental appeal. Usually, the more important the building was, the more complex the dougong would be. 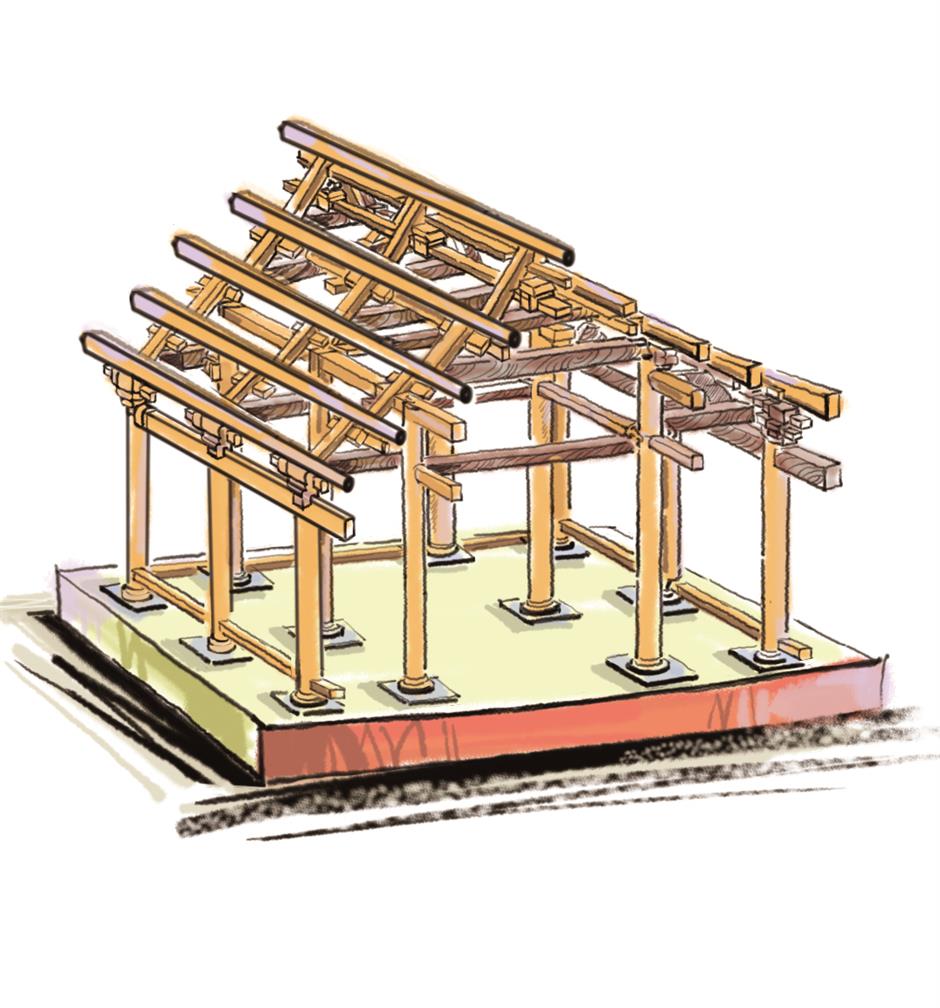 Post-and-lintel construction, one of the two basic types of Chinese roof trusses

Wujia, or truss, is a framework of beams, rafters and posts forming a structure to support a roof. In ancient China, trusses were almost always made of wood.

Typically, ancient Chinese roofs were supported by beams and pillars rather than walls. Due to semi-rigid tenon-and-mortise works, such frameworks were better at shock absorption, which made such buildings safer in the event of an earthquake.

For example, during the devastating 1976 Tangshan earthquake, which killed more than 240,000 people in Tangshan City, about 170 kilometers east of Beijing, many buildings in the Chinese capital were damaged. However, little harm was done to the imperial palaces in the Forbidden City, which feature semi-rigid trusses.

The former used two or more levels of post and lintel structure to uphold the roof and the latter used square logs to bind together pillars and posts to provide support to the roof.

However, sometimes, both wooden roof trusses were used in the same building. 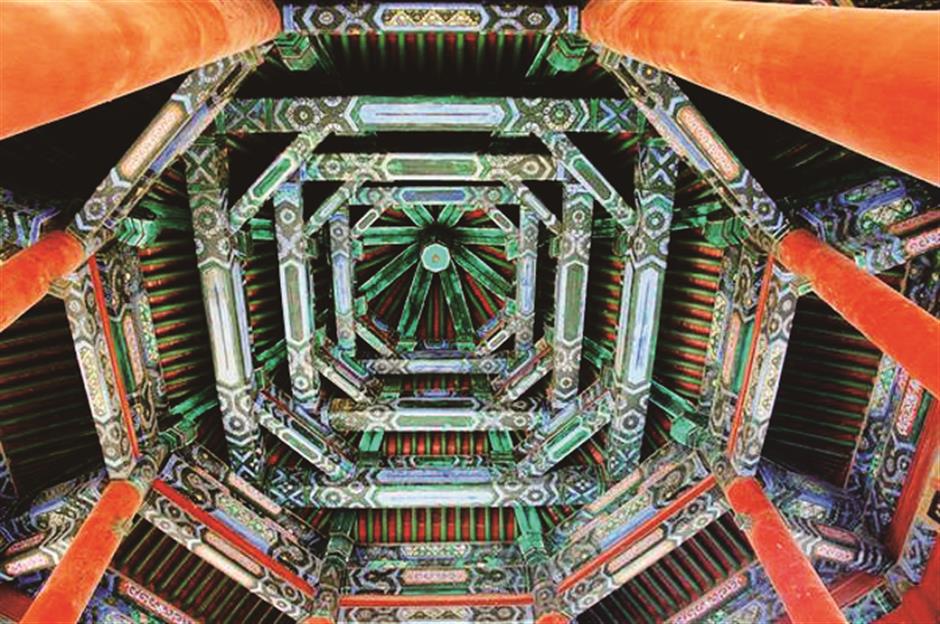 Zaojing, or caisson ceiling, is an ornamental sunken panel in a ceiling or dome.

As a distinctive architectural feature of temples or palaces in ancient China, zaojing, or caisson ceiling, is an ornamental sunken panel in a ceiling or dome.

Using mainly the mechanism of dougong (bracket set), the caisson is built with multiple interlocking layers of wood structural members. They are always richly carved, decorated or painted and appear in shapes such as square, circle, hexagon and sometimes a combination of these shapes.

As a symbol of sanctity, the caisson is always located directly above the most important part of a temple or palace, such as the throne or an altar. So, the center of a caisson is often decorated with bas-relief carving or painting of dragons or other sacred creatures.

Apart from its function for decoration, the caisson ceiling also represents one of the 28 lunar mansions in the Chinese constellations system, which is in charge of water. Since most ancient Chinese buildings were built with wood, the owners wished to have a virtual water source in the building to prevent fire hazards.

So, often one can find caisson ceilings in ancient Chinese buildings decorated with carvings or paintings of aquatic plants, such as lotus and water chestnuts.

Today, some most representative ancient Chinese wooden architectures are still in existence. For instance, Yingxian Wooden Pagoda or Sakyamuni Pagoda of Fogong Temple in northern China’s Shanxi Province is the oldest and highest surviving all-wood tower. Also, the Forbidden City in Beijing is the largest wooden architectural complex in the world.

In addition, traveling around the country one would find that many Chinese people, particularly in rural areas, are still living in timber-framed dwellings.

So, in 2009, when it was inscribed on the UNESCO lists of intangible cultural heritages, the world body pointed out that Chinese traditional architectural craftsmanship for timber-framed structures embodies a heritage of wisdom and craftsmanship and reflects an inherited understanding of nature and interpersonal relationships in traditional Chinese society.

“For the carpenters and artisans who preserve this architectural style, and for the people who have lived in and among the spaces defined by it for generations, it has become a central visual component of Chinese identity,” it added.