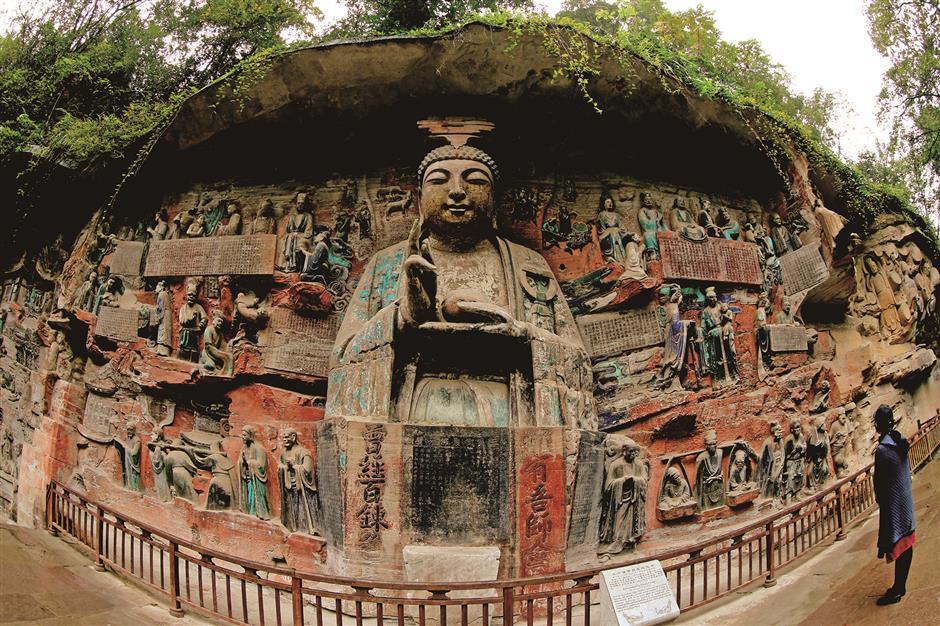 Scholar Yang Jialuo never expected that his exploration in 1945 among the lush green mountains of Chongqing would open a door to a treasure house of human culture hidden for hundreds of years.

On the steep hillsides of the Dazu area in China’s southwest, an exceptional series of rock carvings dating from the 9th to the 13th century shocked the world with its scale, aesthetic quality and rich diversity of religious subjects of Buddhism, Taoism and Confucianism.

Yang and his team first discovered the largest cluster at Beishan Hill. It contained almost 10,000 Buddhist stone statues along a cliff about 7 meters high and stretching over 500 meters. Most were intact.

The carvings on Beishan Hill were sponsored by pious Buddhists in different dynasties, all depicting everyday Buddhist scenes.

Late Tang Dynasty (618-907) carvings featured dignified Buddhas with plump figures in tight-fitting clothes, a typical style of the time, while the Five Dynasties (907-960) statues were exquisite in shape with varied postures and facial expressions, and clothes that had gorgeous and complicated designs.

The carvings from the Song Dynasty (960-1279) were closer to everyday life, touching on a wide variety of religious topics, among which Guanyin (the Buddha of Mercy) was the most popular. The hillside was known as the “gallery of Guanyin Buddha.”

The most representative statues were in No. 136 Cave, carved between 1142 and 1146. The Buddhas’ tranquil faces reflected their inner peace, while ribbons and flowery accessories showed the fashion at that time.

Baoding Hill was another large-scale cluster Yang and his team found in the northeast Dazu area. “I was greatly impressed when standing at the feet of the 1,500 Buddha statues,” Yang wrote in his memoirs 20 years later. “It was like I was backlit by the sun, and I felt every hand of the thousand-hand Guanyin Buddha was waving at me, which made me dizzy.”

What particularly surprised the exploration team was not only the dazzling Buddhist realm and its top-level carvings, but the vivid scenes of daily life in the Song Dynasty designed in a perfect layout, the only one of its kind in the world’s cliff carvings.

A stele set up in the Ming Dynasty (1368-1644) indicated the history had been buried for centuries. The Baoding Hill carvings were ordered, organized and constructed by a man named Zhao Zhifeng, who spent seven decades on the project.

It was carried out during the South Song Dynasty (1127-1279). Stretching along 2.5 kilometers in an area of more than 37 hectares, the cliff carvings had more than 360 giant Buddhas and hundreds of regular-size statues.

Nanshan Hill featured many Taoism statues. The project began in the South Song Dynasty with more carvings added in the Ming and Qing dynasties (1368-1911). Large numbers of stone statues were also discovered on the hills of Shimen and Shizhuan, where religious topics of both Buddhism and Taoism were highlighted.

What made Shizhuan Hill special was that it had a statue of Confucius (551-479 BC), with the philosopher sitting in the center of the No. 6 Cave with his 10 disciples on two sides.

The God of Eyes outside the Shrine of the Jade Emperor on Shimen Hill has huge carved eyes that could see for miles, and the God of Ears was depicted with an ugly face, striking a listening pose. Both featured exaggerated muscles with bulging veins.

The Wutong God in the No. 7 Cave was carved with a broad forehead, big mouth and thick lips, standing on one leg in a ring of fire. It seemed he would fly into the sky at any second.

The Dazu rock carvings stand for the highest level of Chinese cave temple art, but also indicate that Buddhism, Taoism and Confucianism could exist at the same time in a harmonious way, instead of fighting as they had done for centuries before.

With such high art and cultural values, the carvings were always desired by unscrupulous illegal antique dealers.

In 1995, a Buddha’s head on Beishan Hill was found to be lost. After 25 days, the thief Wang Hongjun was caught and he was sentenced to death one year later.

In 2004, the heads of two Buddhas on Shimen Hill were stolen, and they are still missing today. Five years later, a head that looked liked one of the missing was discovered in the villa of Wen Qiang, former director of the Chongqing Judicial Bureau, who was later sentenced to death for protecting criminal gangs.

To preserve the rock carvings, daily maintenance and care is strictly carried out. At the same time, laws and regulations for heritage protection apply at different administrative levels.

In 2008, a survey by the National Cultural Heritage Administration in the Dazu hills found that the stones were being destroyed. In 2011, Dazu rock carvings started to go through a renovation project, the biggest and most scientific one of its kind, and one which will last to 2022.