The beauty of the imperfect and incomplete 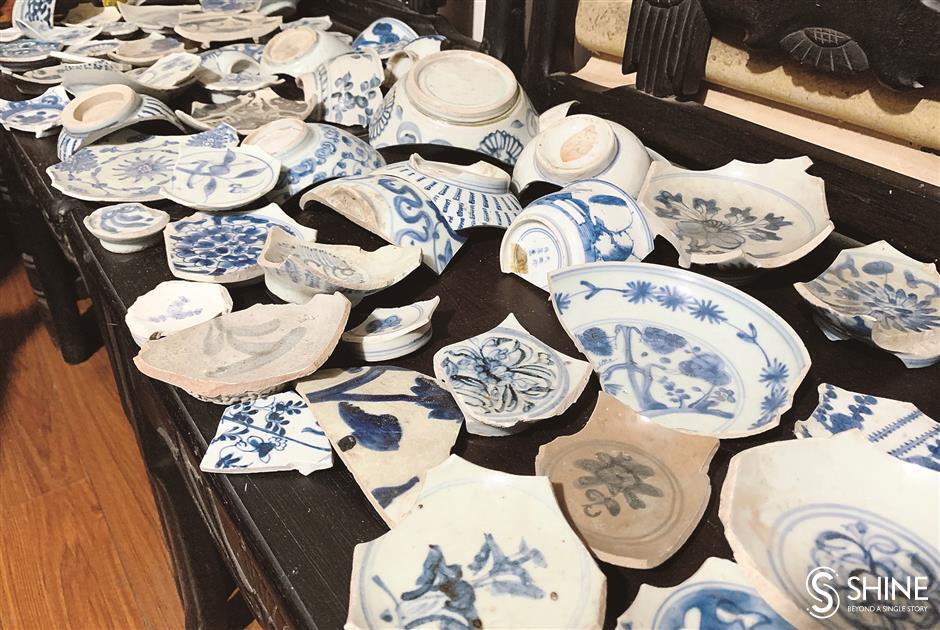 Yang Jinmei has collected thousands of porcelain fragments that now add up to more than 2 tons in weight.

Thousands of porcelain fragments weighing more than 2 tons are stored in the home of 76-year-old antique lover Yang Jinmei. She doesn’t buy them. She scavenges for the pieces at construction sites and other likely places.

“It is very miraculous that I am always able to dig out porcelain treasures,” said Yang.

Her love story with porcelain began with a coincidence.

Yang’s husband Liu Laisheng is a collector of grain coupons and antique coins. In 1997, Liu found five porcelain fragments at a construction site in Baoshan District. He and Yang washed them and, much to their surprise, saw the Chinese characters shou and fu, which mean “longevity” and “auspiciousness.” The words in blue were written in clerical script and regular script, respectively.

Since then, Yang has been captivated by the beauty in the imperfect and the incomplete.

“Born into a poor and broken family, I never had the chance to see beautiful porcelain artworks before they were broken,” she said. “I guess that’s what attracted me to them.”

With tears filling in her eyes, she told me she was abandoned by her mother when she was only 2 years old, and her father died one year later. Without parents, the little orphan was forced to live with relatives.

“When I was young, my hair was yellow because of malnutrition,” said Yang. “Having no bedroom, I slept alone in a hut.”

At the age of 18, Yang became a health worker in her village and was trained as a midwife. She worked in gynecology and obstetrics at a township health center in Baoshan.

A black-and-white photo featuring Yang with a stethoscope around her neck hangs on the wall of her sitting room. Next to it, there is a loving photo showing Yang and her husband. They appear to be deeply in love.

“Knowing that I was interested in porcelain, my husband encouraged me to get some professional training,” said Yang. 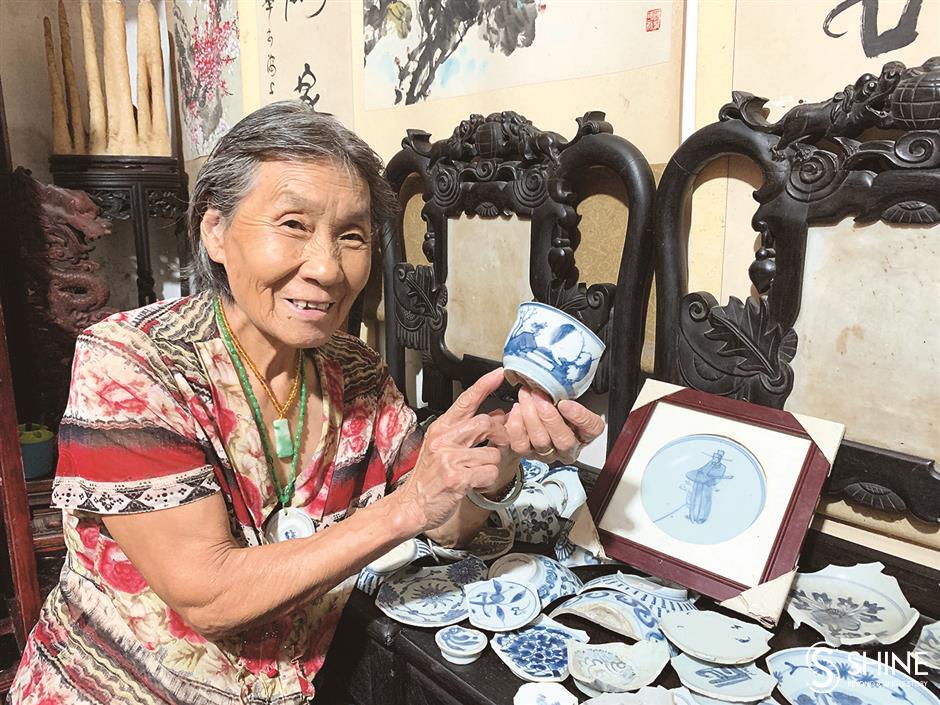 The 76-year-old Yang hunted for the remnants at construction sites and other likely places.

She said she has hunted for porcelain fragments on river banks, at bulldozed sites and even at the bottom of ponds.

“I was born in the Year of the Monkey, so I am quite flexible,” said Yang.

According to Yang, she and her husband searched for the pieces almost every day between 1997 and 2005. The detritus of urban construction projects in the city afforded ripe hunting grounds.

“In 1997, the area near the Shanghai Railway Station was undergoing construction and the excavated soil was transported to Taihe Road in Baoshan,” she said. “I found there a fragment decorated with the Chinese character shou.”

On a rainy day in August 2005, Yang took her granddaughter to Yuyuan Garden. Passing through Lishui Road, she saw a construction site and ended up with five boxes of muddy fragments. The activity caused her subsequent back pain for three months.

“Many people thought that I was crazy,” she said. “Actually, I thought that myself, but once I saw soil, I wanted to dig.”

In August 2018, she released a 2.5-kilogram tortoise in a park river as a kind act of Buddhist tradition. She said she was hoping to generate positive karma and was praying that the deities would bless her husband, who suffered a stroke last year.

“The tortoise looked back at me five times,” said Yang. “A worker beside me was digging a hole to plant a tree. Suddenly, I got a glimpse of something white-and-blue in the soil. I picked it up and realized that it was a porcelain fragment.” The porcelain fragment decorated with the Chinese character shou, or “longevity,” in different scripts was found by Yang the day she released a tortoise in a park river.

This treasure seeker was so devoted to collecting porcelain fragments that she almost gave up her own restaurant. After buying produce in a wet market at 5am, she would toss all the foodstuffs to restaurant employees and rush out to hunt for more remnants.

“The porcelain fragments with both ‘sky’ and ‘earth’ are best,” said Yang.

“Sky” implies the rim, while “earth” represents the round foot.

Compared with complete antique porcelain artworks, the fragments are much more affordable to the general public. The imperfect artifacts are informative, allowing people to have a better understanding of their inner structures and materials.

Yang carefully selected some highlights of her collection and toured with them around communities in Shanghai 67 times. One of her collectibles is shaped like the Chinese character shou and is composed of 66 blue-and-white fragments with the same character in different scripts.

“Porcelain is also referred to as ‘china’ in many foreign countries because it is thought to have originated in China,” said Yang. “As a Chinese collector, I have the responsibility to spread the history of Chinese porcelain here and abroad.”