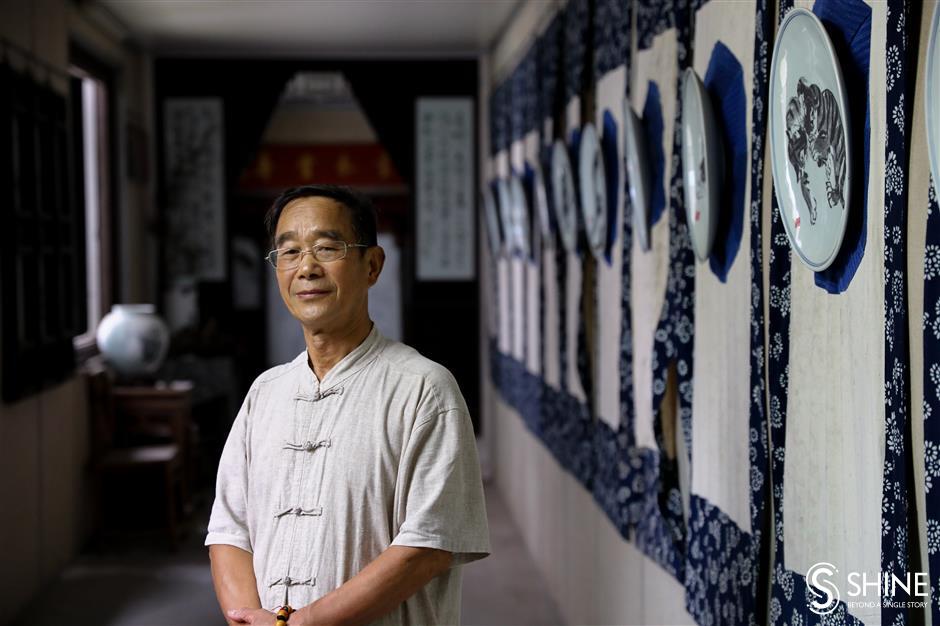 Zhang Zongxian, 70, is the fourth generation of porcelain carvers in his family.

Cling-clang, cling-clang. The repeated metallic ring echoes from the second floor of an ancient-style building on Sanlintang Old Street in the Pudong New Area.

Inside a work studio there, Zhang Zongxian, 70, is using a pointed chisel to carve a chrysanthemum on a blue glazed porcelain plate.

“Porcelain carving is an art form that incorporates calligraphy, painting and carving,” says Zhang. “It is an art where knives replace brushes and porcelain substitutes for paper.”

In his studio are chisels, a small hammer, a marking pen and acrylic paints, along with a pair of earplugs to lessen the noise.

The whole process of porcelain carving, in Zhang’s words, “is not that sophisticated.” A design is needed before using carbon paper to make a copy on the porcelain. The tips of knives need to be honed, and then color is added.

Easier said than done. It is no doubt hard to master the density of engraved dots and the thickness of knife tips.

One of Zhang’s porcelain plates features a galloping horse, its muscular physique and dynamic pose frozen in thousands of engraved dots. Another plate is carved with a dancing girl dressed in ethnic clothing.

Apart from small pieces like plates, Zhang also carves on large wares such as 2.5-meter-high vases.

“Most of my works are black and white,” says Zhang. “I don’t want to produce an illusion that they are blue-and-white porcelain or other top-end porcelain. They are simply porcelain carvings.” 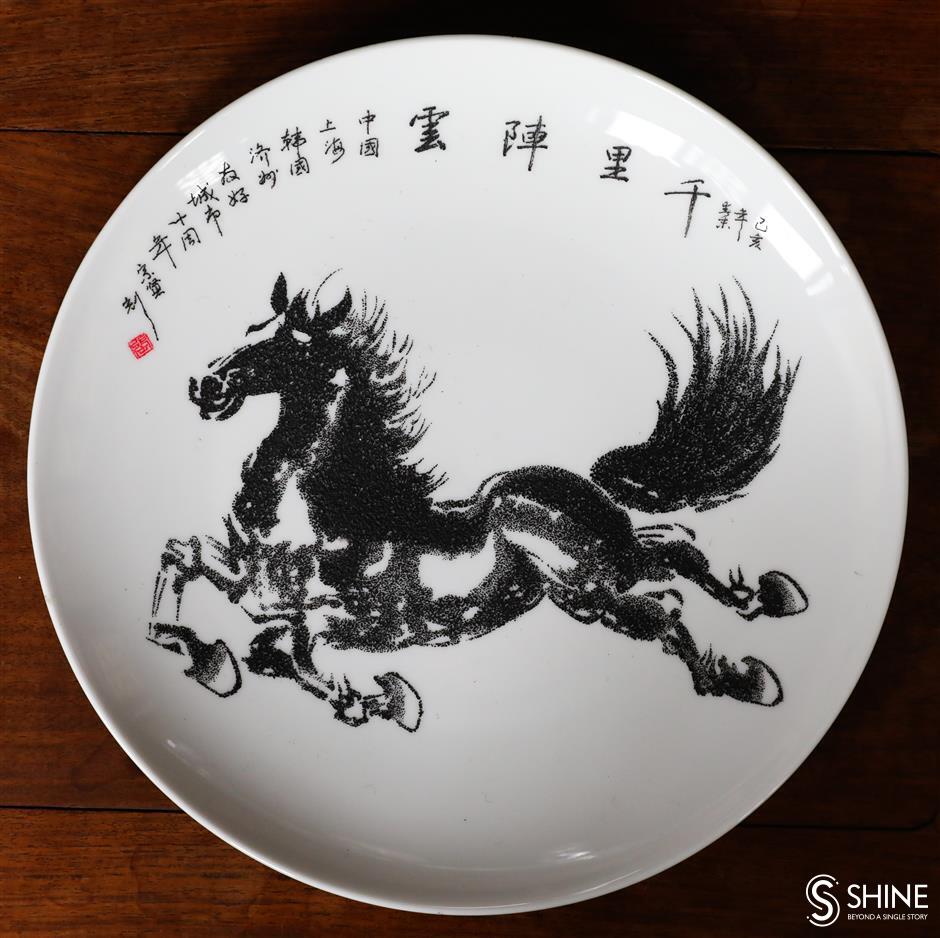 A galloping horse is frozen on a plate through thousands of engraved dots.

A native of historic Sanlin Town, which traces its history back to the Northern Song Dynasty (960-1127), Zhang is the fourth generation of porcelain carvers in his family. His great-grandfather, Zhang Jinshan, was a locally renowned businessman in the Qing Dynasty (1644-1911) who admired folk art and learned porcelain carving from master Hua Yuesan.

According to Zhang, Hua once worked as a teacher at the porcelain department of the arts and crafts school in Beijing, which was established by a government bureau during the reign of Emperor Guangxu (1871-1908). After the bureau was dissolved, Hua returned to his hometown Shanghai.

Zhang’s great-grandfather was a patron of Tiehuaxuan, a pottery and porcelain shop with over a 100-year history, which still remains in the Yuyuan Garden.

“The origin of porcelain carving is still not known,” says Zhang. “In my opinion, it didn’t truly become an art form until the Qing Dynasty in terms of the tools it requires — the tungsten steel or diamond knives that were imported at that time.”

Inviting me to his home, rebuilt on the site of his ancestral house, Zhang takes a shabby bamboo box out of a vintage wooden cupboard. The box contains one of his great-grandfather’s work — a porcelain teapot carved with trees, mountains and Chinese characters. Another teapot carved by his grandfather is placed beside. It features a row of children playing the suona, or double-reed horn, or carrying a drum.

“Both of these works were porcelain carving as a hobby rather than a way to earn a living,” says Zhang. “Compared with my works, theirs look much simpler. However, I wasn’t devoted to this art until I was in my 50s. Before that, I made works occasionally, just for pleasure or for gifts.” 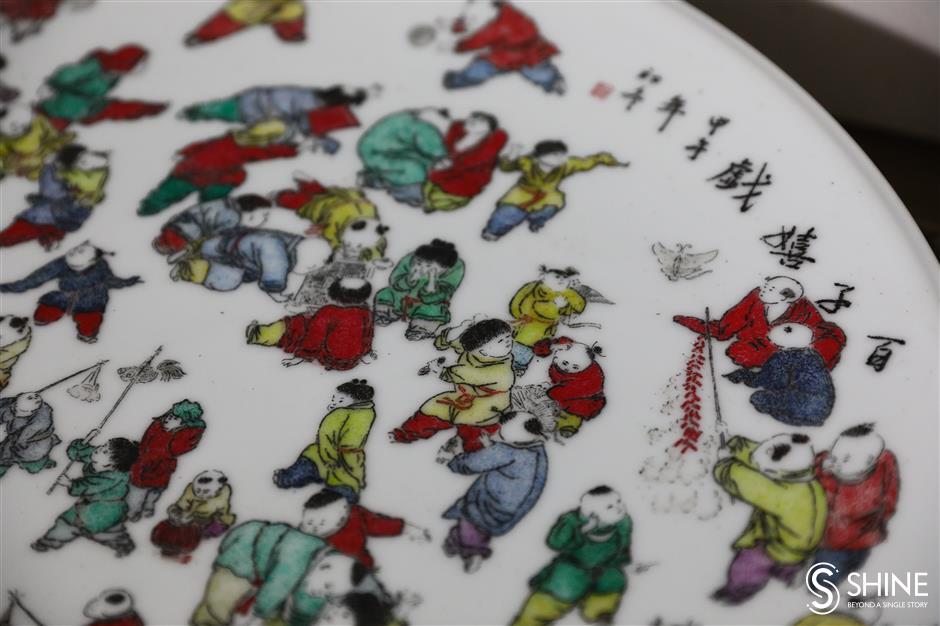 A porcelain carving features 99 children. Zhang says the 100th child is himself.

Zhang completed his first work when he was in his 20s. It was a birthday present to his mother Zhu Shuixian, whose name means “daffodil.” Purchasing the flower and a porcelain pot, Zhang carved on the pot the Chinese characters bing qing yu jie, a Chinese idiom meaning “pure and noble.” His mother’s appreciation of the gift gave him great encouragement.

But the young Zhang didn’t make a career of porcelain carving at that time. He wanted a job that earned him some money so he decided to go into business after working as a teacher of gardening at a vocational school. He failed, however.

“I am very regretful,” says Zhang. “I was impetuous then. Now I want to make up for all the time that I didn’t cherish before.”

According to his apprentice Wang Ying, 42, Zhang often works far into the night. After practicing porcelain carving for about two years, Wang admits it is extremely difficult to learn the technique, but she says she will persist.

“My shoulders and hands often ache,” she says. “I also suffered from tinnitus because of the repeated metallic ringing.”

Living in Qingpu District, Wang spends more than four hours on road to get to and from Zhang’s workshop. She says she didn’t consider her financial situation when she quit a job to learn the carving skill. Fortunately for her, she gets support from her family.

“Given my age, I don’t know whether my craftsmanship will improve or even regain the skill of the past,” says Zhang. “In order to make a living, I sold some of my artworks, but I seldom do that anymore because I want to leave legacies for my students.” 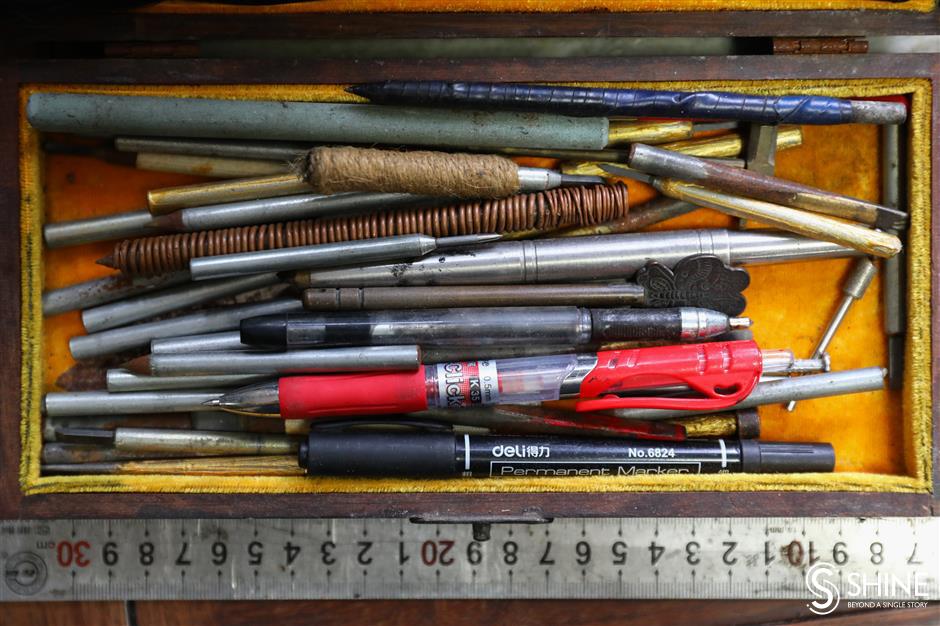 A toolbox of necessities for a carver