From a shoulder pole, a mesmerizing puppet show unfolds on stage

Zhu Xueshan, 63, is one of the few surviving practitioners of the 200-year-old art form called the Chongming shoulder pole show, a local version of solo glove puppetry.

Legend has it that the folk art was introduced from Suzhou around the turn of the 19th century, when a Suzhou craftsman surnamed Li came to Chongming Island to give performances. An island resident named Gu Zaishi learned the art form from Li. It was passed down through generations. 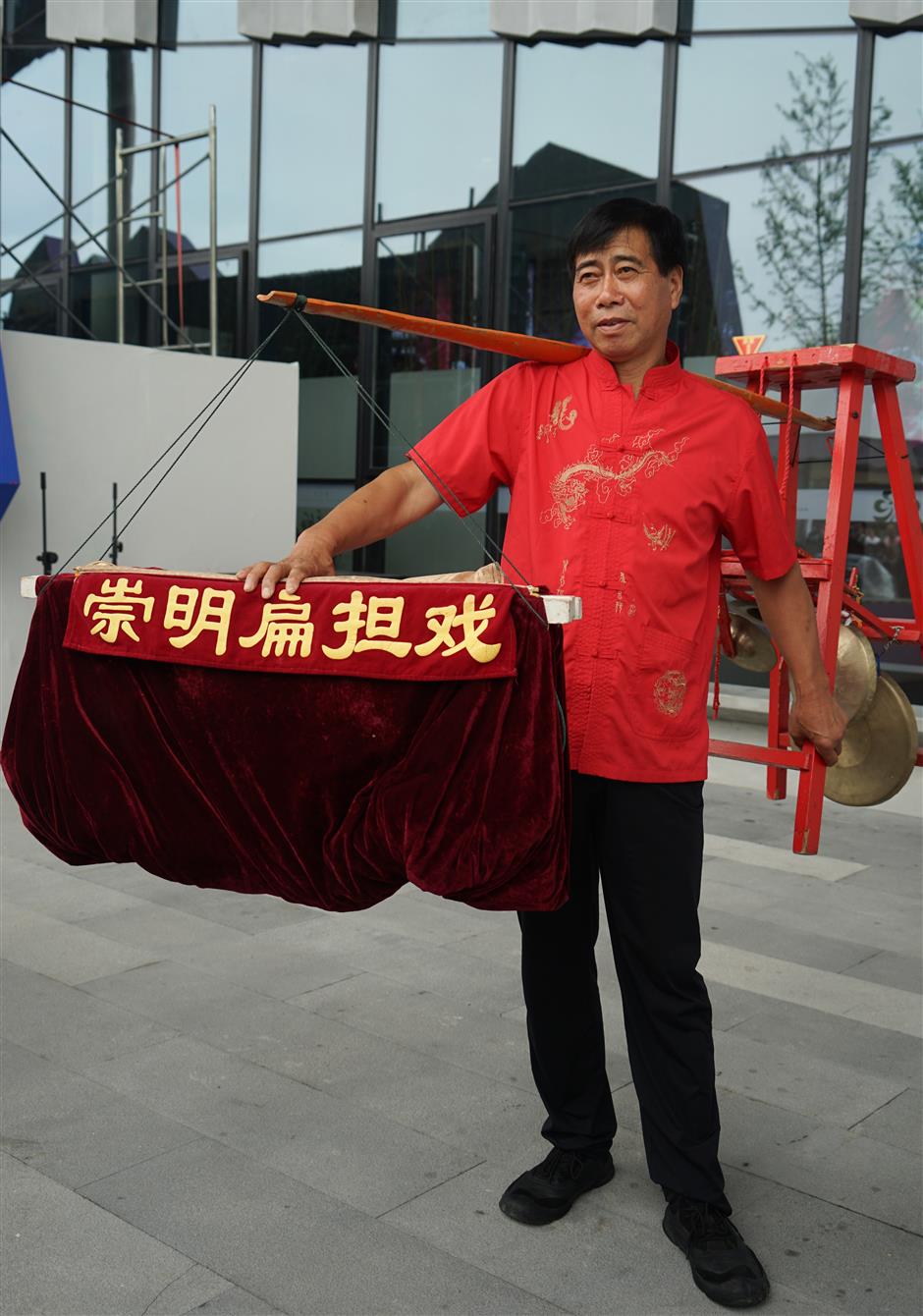 Zhu Xueshan's shoulder pole carries stage apparatus on one end and a high stool on the other.

The whole show apparatus is carried on a shoulder pole and consists of a set of props, a stool and Chinese percussion instruments.

In performances at the recently concluded China Flower Expo in Chongming, Zhu appeared on stage shouldering a red bamboo pole carrying his props, stool and instruments. He quickly set up a small wooden puppet theater with a canopy printed with characters for "Chongming shoulder pole show."

The shoulder pole, which fit into a hole in the stool, was used to prop up the little stage. A red, floor-length velvet curtain was pinned to the puppet stage, creating a 1-square-meter space where Zhu crouched on a high-legged stool. It had two Chinese gongs and a Chinese cymbal underneath.

Drawing inspiration from the novel "Journey to the West," one of the four great classical novels of China, the show presented a revised version of the Tang Dynasty (AD 618-907) story of the Buddhist monk Xuanzang. In the show, he comes to Chongming Island to visit the flower expo with his disciples Sun Wukong (the Monkey King) and Zhu Bajie (a pig companion).

During the trip, Zhu drops some litter on the ground, drawing a rebuke from Sun. The two come to blows, and Xuanzang intervenes, explaining the garbage-sorting regulations of Shanghai.

All the glove puppets were handmade by Zhu Xueshan. Their heads are made of camphor wood, which is moisture-proof and moth-resistant. The puppets' torsi and limbs are comprised of cloth costumes. 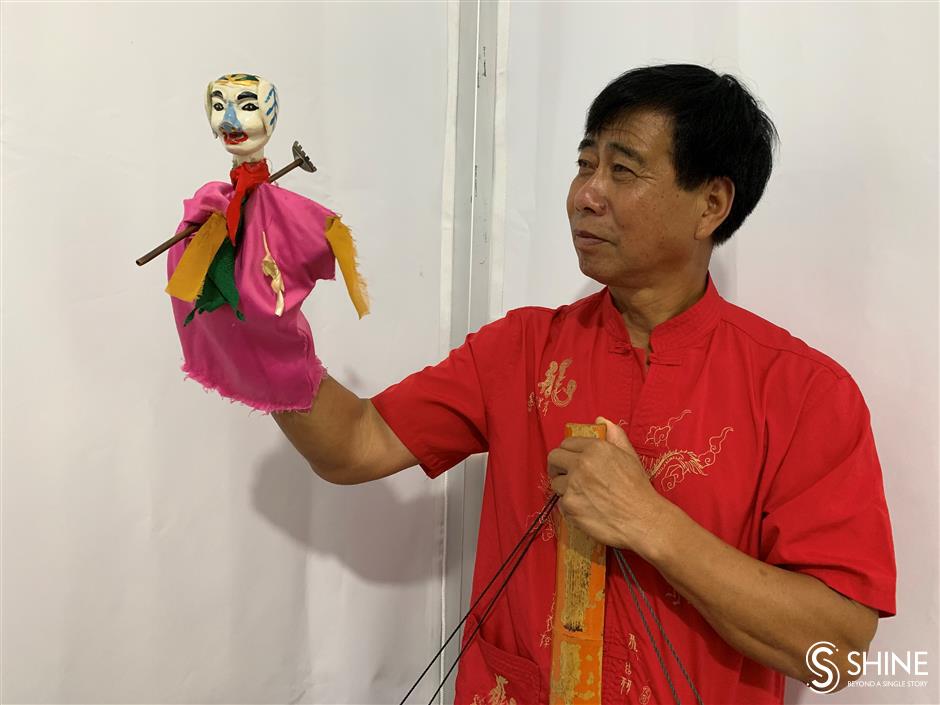 Zhu uses his deft hand to manipulate one of his puppets.

In the show, Sun is armed with a golden cudgel and Zhu Bajie defends himself with a nine-toothed rake. Zhu Xueshan's deft hands have them brandishing their weapons, tumbling about, jumping and beating at one another. Something like a "Punch and Judy" show.

While Zhu's hands were manipulating puppets, his feet were striking gongs to create a lively atmosphere. At the same time, he was narrating the story in local dialect, with different voices for different characters. A tiny whistle simulated various sounds related to the action.

Zhu's performance ended to robust applause. Sitting beside me were several elderly people from Chongming. They watched the puppetry of their childhood with obvious mirth.

The Chongming shoulder pole show reached its heyday in the 1930s and 40s. In that era, show artists strolled through villages to give performances. At the first sound of the gongs, villagers quickly appeared, stools in tow, to sit and watch the plays.

"It was one of few recreational activities for people living on the island at that time," said Zhu. 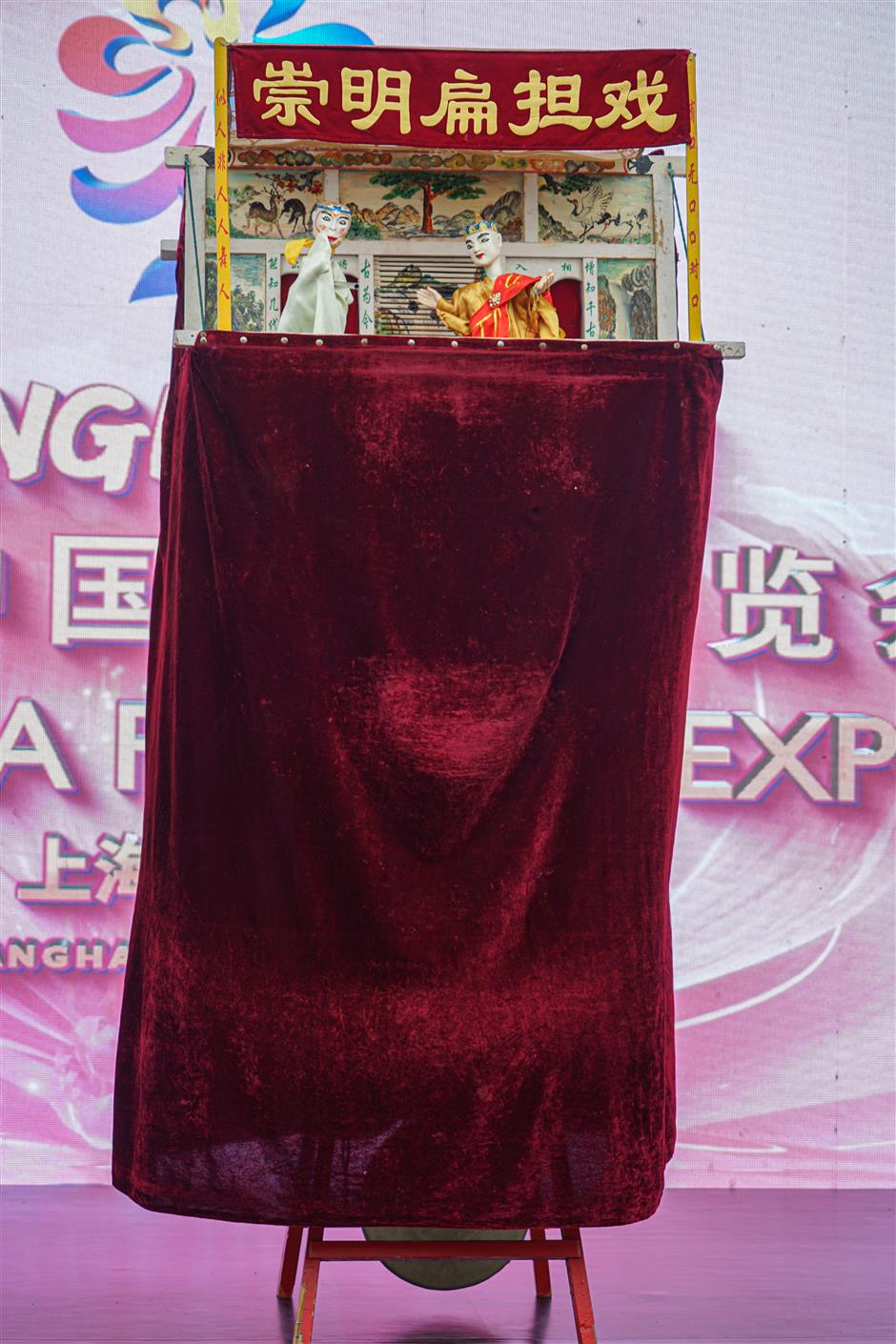 Hidden behind a floor-length curtain, Zhu performs a show drawing its inspiration from the novel "Journey to the West."

His grandfather and his father taught Zhu and five cousins the old art form.

"To be honest, I chose to study it because it brought in a good income, and I thought that would help me find a girlfriend," said Zhu. "I was earning about 20 times what a carpenter could earn in a day."

But all that disappeared with time. His cousins abandoned performances to do construction work or drive taxis. But Zhu persisted.

He still recalls fondly how he and his cousins would walk to places outside Chongming – some at quite a distance – to give performances when they were young.

"The shoulder pole weighed more than 15 kilograms, and we walked 15-20 kilometers a day," said Zhu. "We normally went out in spring and winter, seasons when farming was not so busy and there were many festivals."

Apart from classic stories like "Journey to the West," "Water Margin" and "The Generals of the Yang Family," Zhu also created new scripts that took on contemporary themes such as garbage recycling and coronavirus quarantine.

He has also uploaded short videos of his performances on Douyin, the Chinese version of TikTok.

Nowadays, Zhu is shouldering more than just a heavy pole. He bears the burden of keeping alive a dying art form.

"I was told by a 103-year-old woman that she often watched the puppetry when she was young," he said. "She hadn't seen a performance for more than 40 years, she told me, and seeing one again revived happy memories of her childhood. Many elderly people like her don't know how to use a mobile phone, and folk art remains an essential form of recreation. I will not let the art die."